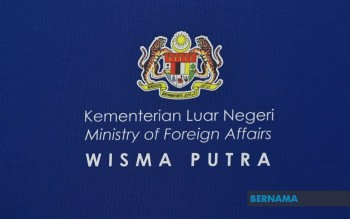 PUTRAJAYA, April 12 (Bernama) — Wisma Putra’s e-Konsular system, which receives and processes purposes for the Certificate of Good Conduct (CGC), has returned to normalcy after experiencing a technical glitch.

The Foreign Ministry in a press release on Tuesday stated candidates ought to anticipate to be issued with their certificates inside the prescribed interval.

“The delay was initially due to technical issues in the hardware of the Royal Malaysia Police’s (PDRM) data system,” the assertion learn.

It was earlier reported in an area newspaper that there was a technical glitch within the e-Konsular system of the ministry, resulting in an extended delay within the issuance of the CGC.

In response to this incident, Wisma Putra stated instant motion has been taken and an answer was agreed upon by the ministry and PDRM.

The step taken was extraordinarily necessary to make sure that the supply of the required providers to the general public is just not affected.

“As such, the CGC application process is now running as usual and the waiting period for the approval shall not be more than one to two months, as stated on the e-Konsular system and the Ministry’s website,” the assertion stated.

The Ministry additionally suggested all candidates to fulfil the necessities and situations said on the e-Konsular system for his or her CGC purposes to be issued accordingly.