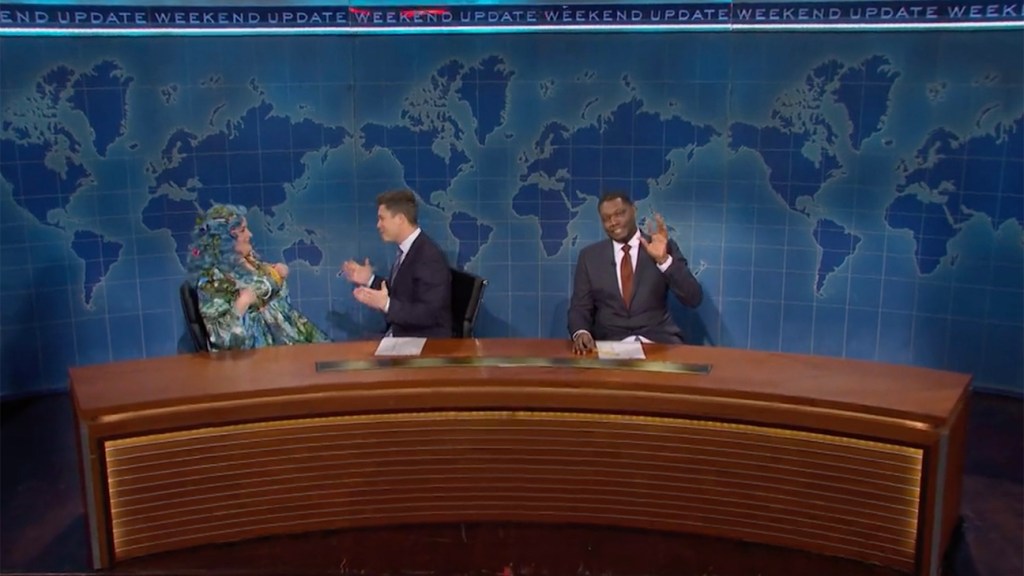 After opening the segment on Nov. 20 by poking fun at Joe Biden’s colonoscopy, the hosts quickly transitioned to Rittenhouse, who was acquitted of all charges related to the killing of two men and wounding of a third amid a police brutality protest last summer.

“So, hopefully, he got all of that shooting out of his system before he becomes a cop,” Che said.

Jost then took a stab at Matt Gaetz saying he’d be open to hiring Rittenhouse as a congressional intern “’cause Gates has always loved teenagers who are willing to do terrible things.”

During the segment, Che also joked about how a school in Washington D.C. postponed naming its theater after Dave Chappelle, in light of the controversy surrounding his newest Netflix special, The Closer. “God forbid you should name a building after someone problematic in Washington DC,” he said, with images of the Washington and Jefferson memorials.

Baby Yoda popped into Weekend Update, in honor of a recent announcement that the Star Wars character would have its own float during Macy’s Thanksgiving Day Parade on Thursday. “Ya boy. Is Back. What up, New York City?!” Yoda said. “Bro, I’m getting paid $2 million to kick it with Pikachu, Ronald McDonald and the dude from Diary of a Wimpy Kid on live TV high as hell. Woohoo!”

Yoda joked about his new “pop punk” look — complete with tattoos of barbed wire and spider webs — before announcing his new album, “Confessions of the Diary of a Lose,” which is about being “unpopular in high school because you’re a little green Jedi.”

The hosts closed out the segment with an appearance from Mother Earth, played by Bryant in a “Chico’s” she got because it had a “moon on the boob.” “I cannot believe that people say the earth is flat, I mean look at these honkas?” she said, to which Jost replied, “HR said I’m not supposed to.”

Mother Earth went on to say she was not doing well after the United Nations Climate Summit.

“I am not a hard ass. I mean you guys gotta admit, I’ve been a very cool mom. I let a lot of weird stuff slide, like I let you do Seaworld. I let you put mascara on rats and monkeys,” she said. “But now I am worried. I think I’m like sick.”

When asked what people could do to help the climate crisis, Mother Earth said it’s all the things that humans don’t want to do, like stop eating hamburgers and throwing iPhones in the ocean. “I feel like all I see is divorced nerds trying to colonize Mars. Honestly, I know Mars. She’s a hot, dry, windy whore,” Bryant continued.

“I’m your mother. I care about you. I love you, and this can go one of two ways: You help me, or I’m gonna kill you. Momma gonna kill you dead. Nah, I’m kidding. I love you, guys. I think the corporations are really gonna help you.”