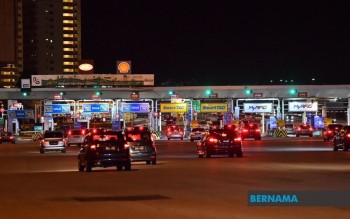 KUALA LUMPUR, May 3 (Bernama) — Traffic on the principle freeway heading north and south is shifting slowly tonight as there are nonetheless individuals travelling to their villages and returning to their properties after the general public vacation for Hari Raya Aidilfitri.

A spokesperson for the Malaysian Highway Authority (LLM) mentioned as of 10.30 pm as we speak, site visitors was congested on the North-South Expressway (PLUS) northbound from Tapah to Gopeng, Ipoh to Changkat Jering in Perak and Alor Pongsu to Jawi in Penang.

“Traffic was additionally reported to be heavy from Pedas Linggi to Port Dickson and Bandar Ainsdale to the Seremban Rest and Service space.

“For traffic heading south and towards the capital, congestion was reported before the Hutan Kampung Toll Plaza in Kedah, Pendang towards Gurun, Sungai Petani Utara to Sungai Petani Selatan, from Changkat Jering to Bukit Berapit, Bidor to Slim River, Pagoh to Ayer Hitam and Simpang Renggam to Sedenak,” the spokesperson mentioned when contacted by Bernama.

The spokesperson added that there was no congestion on the path to the East Coast, besides from the Gombak toll plaza heading to the capital.