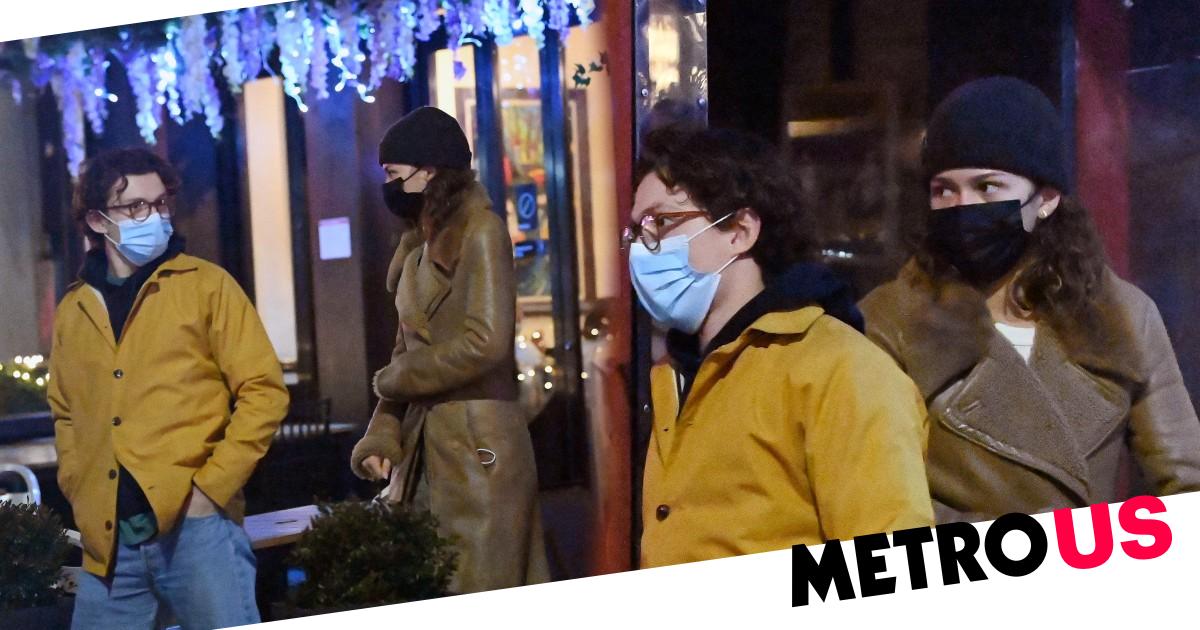 Tom Holland and Zendaya have been spotted out and about together in New York City as they prepare for the release of Spider-Man: No Way Home.

The loved-up couple, both 25, were seen leaving the trendy Melba’s restaurant in Harlem just days before the release of the hugely-anticipated Marvel film.

After enjoying an intimate dinner date in the popular eatery, Tom and Zendaya wrapped up against the cold before stepping out on to the streets together.

Tom, wearing a yellow button-up coat and a pair of glasses, led the way out of the restaurant, looking comfortable with his hands in his pockets as the pair went for a stroll.

Zendaya, who plays MJ in the phenomenally popular franchise, mixed casual and classy as she opted for a smart brown leather coat with a fur hood, grey jeans and a dark beanie hat.

Tom was spotted looking back at his Dune star girlfriend as they left the restaurant, which was lit up with glowing Christmas lights.

The pair had earlier seen stepping out of a black car in the city, with Zendaya wearing a comfortable khaki hoodie and navy sweatpants, carrying a juice despite the December chill.

Tom was similarly dressed in a casual manner, wearing a navy hoodie with classic denim jeans and Nike runners similar to Zendaya’s own pair.

The Spider-Man star was seen wearing a dark-coloured beanie, but in a sweet gesture may have given the hat to his Zendaya to help her fight off the freezing New York cold.

Both Tom and Zendaya wore face masks due to the Covid pandemic – and possibly to lower the chances of them being recognised and mobbed by adoring fans.

The pair, flanked by their team, walked along streets coloured by graffiti tags as Tom kept his hands in his pockets to keep warm, with temperatures plummeting as Christmas approaches.

Zendaya was later seen getting back into their ride, this time with her hood pulled up, wearing a pair of glasses, and armed with another cold drink.

The smitten pair are currently on the promotional trail for Spider-Man: No Way Home, and this week appeared in London’s Old Sessions House for a photocall.

Standing together with their arms around one another on a sweeping staircase, the couple laughed and exchanged a tender glance while posing for photographers.

However, they do prefer to keep their relationship discreet, with Tom recently admitting on The Graham Norton show that they felt they were ‘robbed of their privacy’ when pictures of them kissing were published online.

Despite Spider-Man: No Way Home just days away from being released, certain details are being kept closely under wraps.

Neither Sony or Marvel have confirmed or denied the long-held theory that Tobey Maguire and Andrew Garfield will make an appearance.

This theory exploded in popularity even further once the trailer was released showing that Jamie Foxx, Willem Dafoe and Alfred Molina will be reprising their roles as Maguire and Garfield’s enemies.

While Tom – who plays Peter Parker – has also remained tight-lipped, he has said that No Way Home is ‘dark’ and ‘sad’ – so that’s fun.