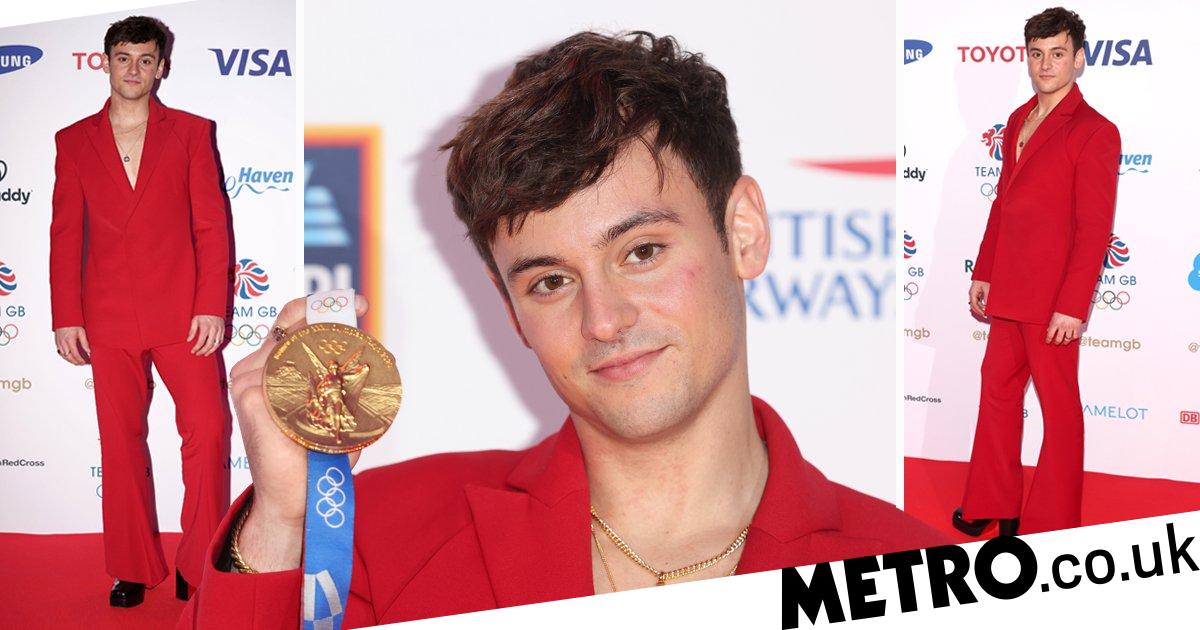 We’re used to seeing Tom Daley in swimming briefs or homemade knitwear, but he can also do high fashion.

The Olympic champion rocked a pair of platform boots as he walked the red carpet at the Team GB Ball.

Tom, 27, went shirtless beneath a scarlet blazer paired with matching trousers, and accessorised with simple gold chains and a pair of retro black patent heeled boots.

He was giving us serious Harry Styles vibes as he posed for the cameras, before holding up the ultimate accessory – his gold medal from the Tokyo Olympics.

Well, you’d carry it everywhere too, wouldn’t you?

Tom and current I’m A Celebrity… Get Me Out Of Here! campmate Matty Lee took the gold medal in the synchronised 10m back in May, before winning a solo medal in the individual 10m platform final.

However, it wasn’t just his sporting brilliance that got Tom headlines – it was also his sideline hobby.

The star, who shares a three-year-old son, Robbie, with husband Dustin Lance Black, was spotted knitting while not diving at the Olympics, after picking up knitting and crocheting during lockdown.

Tom made his own knitted caddy for his gold medal and created a stunning Team GB cardigan, and has developed such a following that he has launched his own knitwear collection.

Made With Love by Tom Daley launched this week, with the star selling knitwear kits with patterns and yarn to help crafty fans make their own scarves, hats, cardigans and blankets.

Tom said: ‘Over the past two years, knitting has been my saviour.. It’s been a form of mindfulness in between training and competing, and a way to pass the time while I’ve been travelling or sat at home during lockdowns.

‘I bring my knitting everywhere and I feel like I’ve accomplished something every time I make something new. I like to think knitting is making a comeback so I look forward to people giving it a try if they haven’t before, making things they can actually wear.’