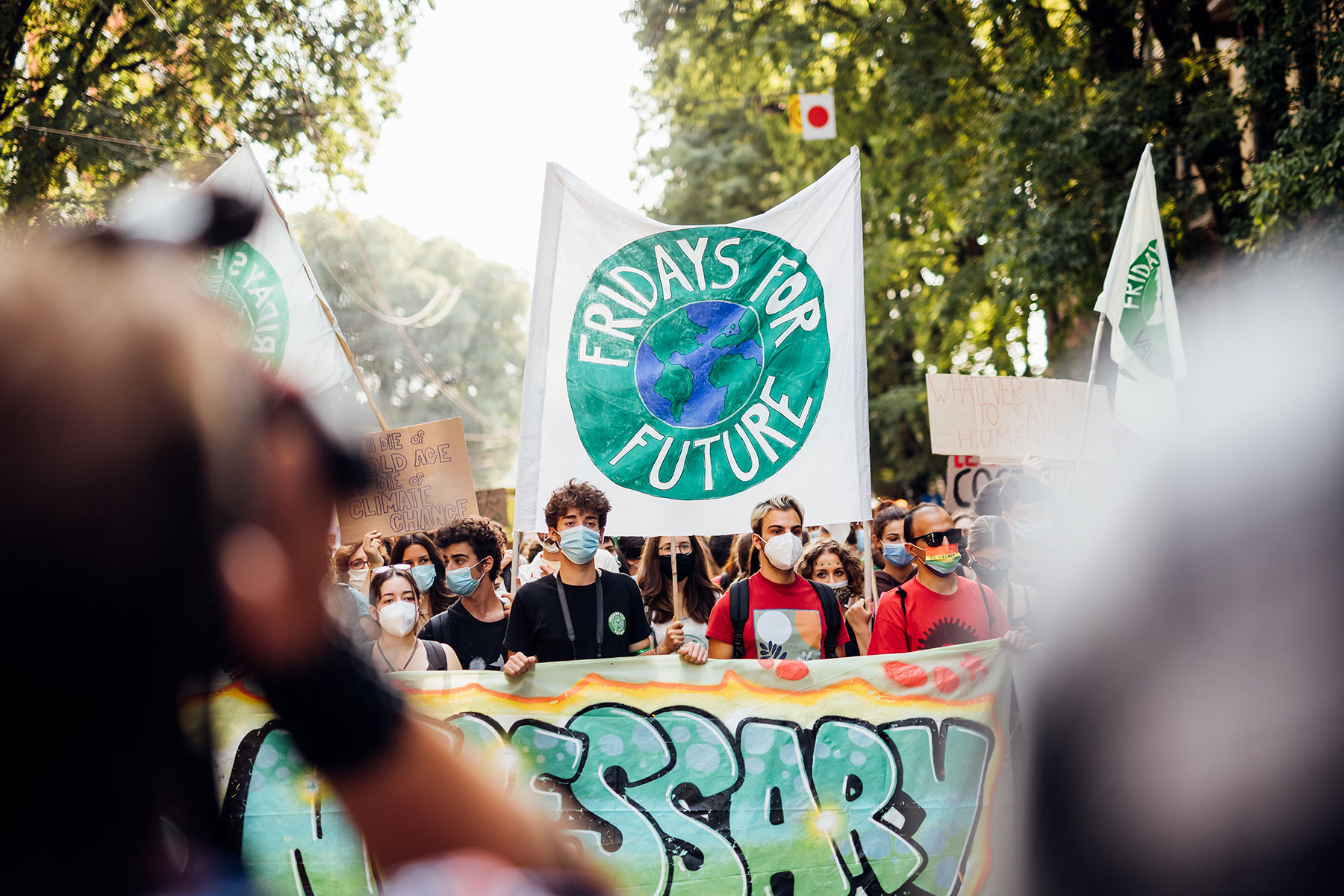 I’ve only had to show my vaccination card a couple times — to eat in a restaurant in New York City, to see a play in Washington, DC. I was happy to do so. Once inside, I was relieved to be among the vaccinated.

Most Americans have gotten vaccinated because they simply want protection from COVID-19. A small number of citizens have gotten jabbed in order to go to restaurants, attend sporting events or qualify for lottery prizes.

When It Comes to Climate Change, Promises Matter

You’d think that would be enough. An effective vaccine against a life-threatening disease, an opportunity to regain some semblance of normalcy, a coupon for 10% off your next purchase at the store where you got your shot: truly a no-brainer. And yet, there has been resistance.

Imagine an alternative ending to the film “I Am Legend” in which the two immune humans transport the anti-zombie vaccine to a compound of survivors only to be met with questions like, “How long did it take to develop this vaccine? Does it contain a microchip? Are you a shill for Big Pharma?” This is the same vaccine that Will Smith blew himself up to safeguard? For some people, every gift horse is a Trojan horse.

It would be one thing if the anti-vaxxers were a tiny minority living like hermits in the wilderness. Alas, they are very much among us, offering up their bodies on a daily basis to keep COVID-19 alive and circulating. Who’d have expected that a deadly virus would acquire such a rabid fan base?

Since carrots have gone only so far in breaking down the resistance of the hesitant, governments are now deploying sticks. In one country after another, the state is using various forms of economic coercion to break down resistance. These “mandates” require workers by sector, or in some cases all sectors, to comply or risk losing their jobs. As a result, all that anti-lockdown and anti-masking fervor is now getting funneled into opposing these government efforts to boost vaccination rates and prevent the next wave of infection from overwhelming hospitals and funeral homes.

Several hundred protesters with signs like “Mandate equals Communism” recently massed on the Golden Gate Bridge to protest the California measures. In Melbourne, anti-mandate protesters are comparing the Australian government to the Nazis. In Italy, the far-right Forza Nuova was behind a violent street demonstration against the government’s vaccine mandate. Scattered protests accompanied Austria’s recently imposed lockdown on the unvaccinated as COVID cases hit a daily high in that country.

This is all very troubling. What used to be common sense — let’s eradicate polio, let’s stamp out smallpox — has become a debatable proposition. Perhaps this is no surprise given the revival of flat-Earth advocacy.

But the really scary part is what comes next. I’m not talking about the upcoming upsilon (or whatever) wave of COVID-19, which is enough to give anyone pause. I’m worried about how the world will react to the inevitable green mandates that governments will impose in the near future. After all, voluntary commitments to cut carbon emissions are just not doing the trick. The recent climate confab in Glasgow may well prove to be the high-water mark in this doomed laissez-faire approach.

At some point, governments will start using more sticks than carrots to break our deadly dependence on fossil fuels. Call me a pessimist, but I’m not expecting a warm and fuzzy embrace of future climate mandates. At question here is not just the dubious state of humanity’s collective intelligence. It’s how we conceive of community, government, and our mutual obligations.

In Italy, the “green pass” was initially required only to eat at restaurants, go to museums, and work out in gyms. Then you had to show proof of vaccination to travel by planes, trains, and ferries.

Last month, the government required all public and private workers to show their green passes to go to work. And that’s when the protests really got heated. Dockworkers went on strike in Genoa and Trieste. A rally of 10,000 in Rome on the eve of the new regulation going into effect turned violent. In Udine, a city of about 100,000 people, more than 1,500 showed up with signs like, “Vaccinated and unvaccinated together for freedom.”

It’s not as if Italy is a vaccine-resistant country. Around three out of four Italians have been fully vaccinated. That’s not as good as Portugal (86% fully vaccinated), but it’s way better than the United States (which remains below 60%).

However, really noisy people can capture headlines regardless of how representative they might be. Consider the United States where protesters have argued that mandates for hospital workers, police and airline personnel will lead to mass resignations. As social psychologist Adam Galinsky points out, New York’s largest police union “fought such mandates in court and argued that the police department would lose thousands of officers. In the end, out of a force of about 35,000 officers, fewer than three dozen refused the vaccine. Similarly, of the 67,000 employees at United Airlines facing a mandate, only 320 refused to get vaccinated.”

The numbers elsewhere have been equally low. In France, which experienced spirited anti-mandate protests, only 3,000 health workers were suspended because of their refusal to get vaccinated, which was but 0.1% of the total sector. The same percentage of health workers in New South Wales in Australia resigned in protest. For comparison’s sake, the turnover in the health sector in New South Wales was more than 9% in 2019.

These mandates, by the way, can be remarkably effective. In San Francisco, for instance, the vaccination rate among city workers rose from 55% in June to a post-mandate 94% in October.

The success of mandates and the relative impotence of the protests notwithstanding, it would be a mistake to dismiss anti-vaccine sentiment. First of all, the stubbornly unvaccinated will continue to determine the future course of the pandemic. Second, the reluctantly vaccinated will still cling to their views, which will inevitably be expressed at later occasions.

And what are those views? Let’s not get distracted by the bizarre and the simply misinformed. What lies beneath is a basic mistrust of authorities, whether scientific, political or broadly civic. The predominant sentiment among anti-vaxxers is that these authorities shouldn’t be allowed to tell them what to do with their own bodies. “My body, my choice,” declared the sign of a protesting nurse in Paris.

In some ways, the rhetoric is reminiscent of the mantra of the pro-choice movement: “keep your laws off my body.” But it’s a misleading resemblance. Anti-vaxxers do have a choice and it’s not comparable to a back-alley abortion. They can quit their jobs. In some cases, as in Italy, they can even keep their jobs if they submit to regular testing. And such testing has the added benefit of enabling the country to better track any potential outbreaks.

And let’s remember: abortion is not communicable. Mandates are necessary to safeguard public health. The same applies to vaccines for children in public school. In New York, health care workers must get vaccinated against measles and rubella while child-care workers in Rhode Island are required to get an annual flu shot.

Sure, I have a healthy skepticism of authority, but it doesn’t trump my commitment to the public good. To be blunt, anti-vaxxers just don’t care about the health of the community. That sentiment, which is also shared by plenty of people who get vaccinated for purely selfish reasons, does not bode well for efforts to address the climate crisis.

The commitments that nations made in Paris five years ago to shrink their carbon footprints: voluntary. The promises made in Glasgow this month: voluntary. The choices that you will make this year about buying a car, heating your house, feeding your family: all voluntary.

In a perfect world, everyone cooperates voluntarily to preserve the planet. In reality, some people do so, others promise to do so and don’t, and the rest have all along been looking out for number one. This mix of responses to a public policy challenge falls into the category of a “collective action problem.”

Usually at some point in a collective action problem, some authority has to intervene to establish rules of the road to protect the common good. So far, the interventions to reduce carbon emissions have been largely non-coercive, except perhaps for workers in a handful of countries who have lost their jobs in fossil fuel industries. No one has been forced to go vegan, trade in their gas-guzzler for an electric car or take a solar-powered yacht across the Atlantic instead of flying out of Dulles.

Perhaps governments will continue to use markets to constrain individual choices. Everyone will have to buy electric cars because the old-fashioned combustion kind simply won’t be available. Air travel will become prohibitively expensive except for the elite. Locally grown tomatoes will crowd out ones shipped in from other parts of the world.

But “free” markets — and both corporate actors and individual consumers — are slow to respond to existential crises, are resistant to government interventions and prioritize prices above all else. Markets by themselves will not shift resources quickly enough from the still profitable but highly pollutant sectors to the less profitable except in the long term green sectors.

So, let’s imagine a future government mandate that all businesses with more than 100 employees have one year to become carbon-neutral. Or that all citizens are capped at a certain number of kilowatt hours per month in their household. Or everyone has a certain travel allowance measured in carbon emissions that covers their commute, their work trips and their vacations.

As with the vaccination mandate, the rationale will be that individuals have to change their behavior for the good of the whole. The green mandates will encounter similar resistance. Some people will continue to insist that climate change doesn’t exist, that the government is overreacting or overreaching, that liberty consists of the right to own an SUV and drive it anywhere one likes.

With climate change, however, the threats are not quite so immediate or palpable. People are dying from rising waters on the other side of the world. The casualties will mount up not next week but in 20 years. And what of the use of taxpayer dollars to fund a green transition in the Global South? It’s one thing to ask people to get vaccinated to save lives in their immediate community. Will people submit to mandates to save lives in the Maldives?

Much will depend on the level of trust citizens have in their governments. The skepticism that is concentrated among anti-vaxxers is, unfortunately, more widely shared. According to Pew, only 24% of Americans believe that government can be trusted to do what’s right (down from 77% in 1964). The average among all economically advanced countries is higher — 45% trust their national governments — but still not encouraging.

And that trust will also depend on the nature of the governments themselves. Where the far right is in charge, all bets are off. The same applies to the corrupt, the authoritarian and the simply incompetent.

All of which is to say: Governments have to prove that these vaccine mandates work in controlling the COVID-19 pandemic. They have to ensure that these infrastructure and pandemic recovery funds make a concrete and sustainable difference in people’s lives. They have to demonstrate that government is committed to that old-fashioned principle of improving the public good.

If governments fail this test, here and now, then forget about meeting the challenge of climate change. Without effective government measures and sufficient public support for future green mandates, we might as well be living in houses of straw and sticks. We lazy little pigs will sing and dance and play with our electronic devices until the superstorms of tomorrow huff and puff and blow us all away.

*[This article was originally published by FPIF.]