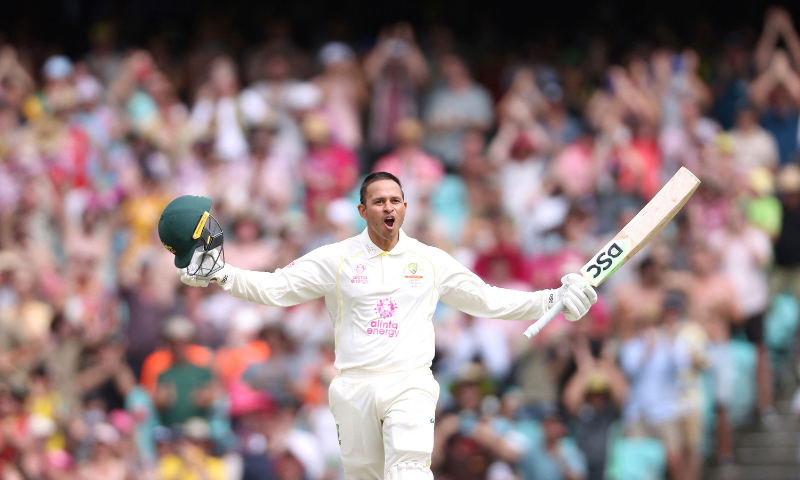 Usman Khawaja scored a memorable century on his return to Test cricket to strengthen Australia’s position in the fourth Ashes Test in Sydney after a double-wicket breakthrough by Stuart Broad on Thursday.

The Pakistan-born Khawaja, playing his first Test since the 2019 Ashes series in England in place of Covid-isolated Travis Head, was at his unflappable best in notching an unbeaten hundred to put Australia in charge at 321 for six at tea.

Khawaja went to the break unconquered on 102 off 202 balls with skipper Pat Cummins on 15.

The elegant 35-year-old left-hander looked likely to be going to tea on the dreaded 99 before he was given the strike by Cummins and then whipped spinner Jack Leach to deep backward square for three to bring up his ninth Test hundred.

His well-received century followed 171 against England in Sydney in 2018, on a ground where he played his early cricket before moving to Queensland.

Khawaja had a let-off on 28 before lunch when Joe Root fumbled a good chance at slip from the bowling of Leach and he went on to punish the beleaguered tourists.

Khawaja’s nick deflected off wicketkeeper Jos Buttler’s gloves but Root at slip had time to react and get his hands in the right place. But the chance went begging, much to Leach’s anguish.

Khawaja’s patient knock stabilised the Australian first innings after Broad had knocked over Steve Smith and Cameron Green in a double breakthrough after lunch.

Broad struck twice with the second new ball, removing the dangerous Smith for 67 and young all-rounder Green for five.

Broad, following up on his 13th Test dismissal of ‘bunny’ David Warner on the opening day, was denied when reviewing a close lbw shout when Smith did not offer a shot just a few balls before getting him caught behind in the same over.

Broad got one to move off the seam and it kissed the outside edge of Smith’s bat and wicketkeeper Buttler accepted the catch.

Smith was annoyed with himself as he left the wicket as he looked in good nick to score a 28th Test century, 12th in the Ashes and fourth at the SCG.

Broad followed up with the wicket of the tentative Green, who lunged forward and got a thick edge to Zak Crawley at third slip. It continued a run of low scores in the series.

In another blow for England, star all-rounder Bn Stokes pulled up bowling his 14th over clutching his left side after a short-pitched delivery to Smith and immediately left the field for treatment.

He later returned to the field but was unable to bowl.

Root, forced into bowling his off-spin in the absence of Stokes, snared the wicket of Alex Carey for 13.

The Ashes are already gone for England after going down by an innings and 14 runs inside three days in the third Test at Melbourne to give Australia a 3-0 lead with two Tests to complete.