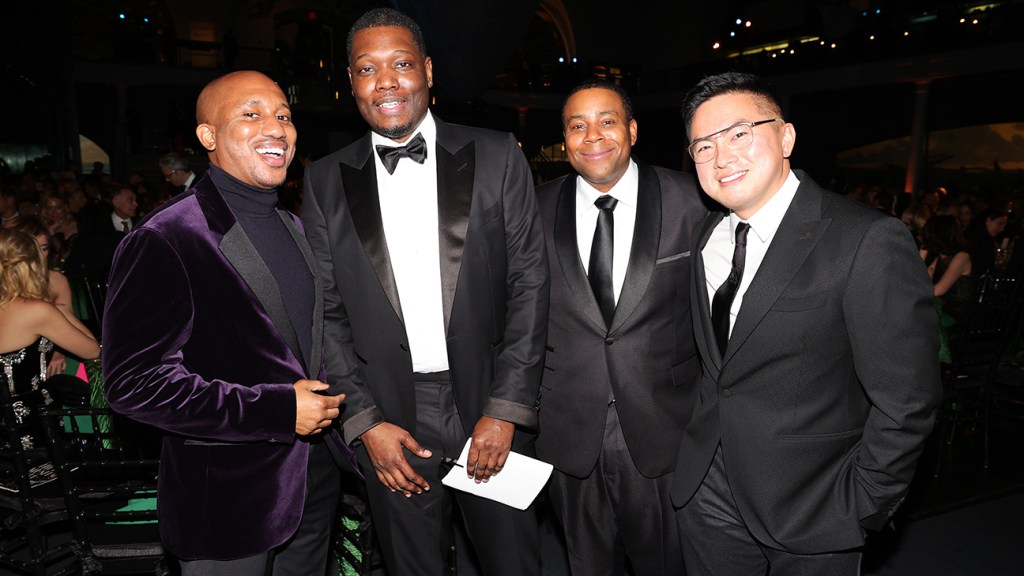 Saturday Night Live cast members, along with Simu Liu, Steve Martin and the Foo Fighters, descended upon the American Museum of Natural History in NYC on Thursday night for the museum’s annual gala to raise money for its scientific research and education initiatives.

After a hiatus in 2020 due to the COVID-19 pandemic, the gala came back swinging, raising nearly $3 million as guests buzzed with excitement to be back in a room full of people — all of whom had to be vaccinated — underneath the giant blue whale in the museum’s Milstein Family Hall of Ocean Life. (Yes, even the whale is vaccinated, according to a bandage on its fin.)

The night consisted of cocktails in the Theodore Roosevelt Rotunda, dinner curated by chef Marcus Samuellson, a live auction hosted by Christie’s Sara Friedlander and a special performance by Foo Fighters. Tina Fey and Jeff Richmond, Lorne and Alice Michaels and Jodie and John Eastman chair the gala each year.

“I wanna see how much money everybody is willing to give,” gala co-host Kenan Thompson joked on the red carpet. “I love this event, I think it’s a good thing for the city. I think it’s really cool for the kids that get to take advantage of the money that they raise to bring them here for free … The museum is a staple, and a big one.”

Thompson hosted the museum gala alongside fellow SNL cast member Michael Che, who introduced the band toward the end of the night, making jokes about fake vaccination cards (“let’s get better cards”) and, of course, politics.

“Politics are so divisive — especially now,” Che said. “That’s why it’s dope to be in this museum, because I don’t care what political party you’re with, you still like the ocean, right?”

Che and Thompson were just two of the cast members who came out to support the museum. Along with boss Michaels, Bowen Yang, Chloe Fineman, Chris Redd, Ego Nwodim, Aidy Bryant, Heidi Gardner and most of the current SNL cast also attended the gala.

Guests across the board expressed excitement in a semblance of normalcy and supporting the museum’s programs. “Anything for kids is a great cause,” Gardner told THR . “And it’s nice to get dressed up and go out in the world.”

Fineman echoed Gardner’s sentiment, adding that the Museum of Natural History is her favorite museum in New York. “I went to school in New York,” she told THR, “and having access to these museums is part of what makes this city so special.”

Ahead of the event, this weekend’s SNL host Liu opened up about the sketch series’ intense schedule that he’s experienced personally in preparation for his first hosting gig on Saturday.

“Everyone moves so quick. Everyone is so hyper-intelligent and smart and responsive,” Liu said on the carpet. “From like the first Zoom meeting on Monday to the sketch table read yesterday, it’s just been moving at a breakneck pace, and I’ve just been hanging on for dear life, but I am truly so, so excited for Saturday.”