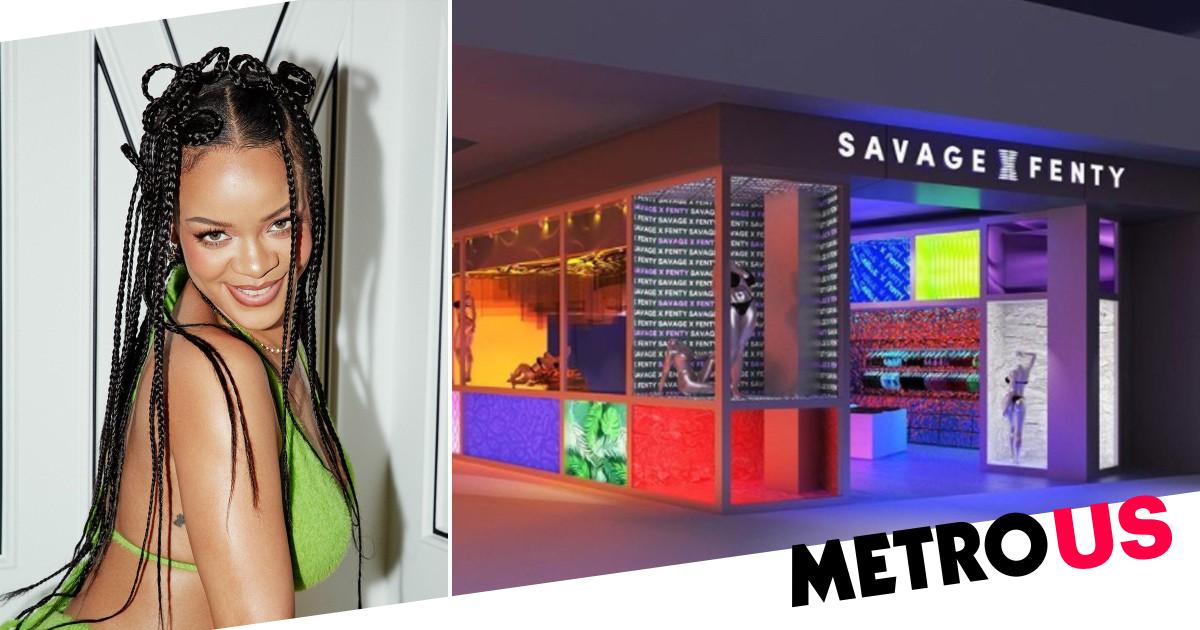 There’s simply no stopping Rihanna, as she’s about to take the Savage X Fenty experience up a notch by opening five physical stores.

The businesswoman, 33, is giving the people what they want by allowing them to shop Savage X in person, as shops are set to open in Las Vegas, Los Angeles, Houston, Philadelphia, and Washington DC.

The nine-times Grammy award winner made the exciting announcement on her Instagram, leaving her 116million followers squealing with joy.

Kicking off the New Year in style, the Work hitmaker wrote: ‘2022, we coming in HOT! We bout to bring you a whole new #SavageXFenty experience with the launch of our brick-and-mortar retail stores! can’t believe it’s actually that time, and I can’t wait for you to have this experience irl….’

These five stores will be the first physical shops for any of Rihanna’s ventures – including the successful Fenty Beauty – so fans are in for a treat when they finally get to step foot inside.

Savage X Fenty continued in a statement: ‘On the heels of the brand’s incredible growth since first launching in 2018, this new direct-to-consumer experience is the next step to bringing a fuller expression of the brand to consumers in key markets.’

There are no signs of Savage X Fenty opening stores in the UK or other countries in Europe just yet, but we can keep our fingers crossed that she’ll venture across the pond some time soon.

Rihanna’s lingerie brand has taken the world by storm since its launch, and was valued at $1billion (£736million) last February.

The brand has been continuously praised for not only its innovative designs, but its size inclusivity and diversity in campaigns.

Rihanna has also bagged many famous faces as ambassadors for the lingerie over the last few years, with the likes of Normani, Adriana Lima, Cindy Crawford, Emily Ratajkowski, Vanessa Hudgens and Troye Sivan walking in her fashion shows.

The Wild Thoughts songstress also announced last year that she and French luxury brand Louis Vuitton were collaborating, but they decided to put their plans on hold for a Fenty ready-to-wear label to focus on the Savage X’s growth.

The underwear brand is just one lucrative avenue of income in Rihanna’s life.

The artist became the wealthiest female musician in the world last August when Forbes reported her net worth to be an estimated $1.7 billion.

This was largely thanks to her 50% stake in Fenty Beauty, which she launched in 2017.

The musician-turned-business-genius launched her first fragrance named Fenty Eau de Parfum towards the end of last year too, which sold out in a matter of days, naturally.

As for her music career, fans have been utterly starving for new music since Rihanna’s last album, Anti, in 2016.

Fans have been not-so-patiently waiting for her elusive ninth album, dubbed R9, for years and, in typical Rihanna fashion, she keeps teasing about when it’s coming.

In a video that did the rounds on Twitter recently, she was asked by a paparazzi if there’s anything on the way this week, and simply replied: ‘Soon, soon, soon’, before walking off.

RiRi hasn’t given an exact release date, or even any hints for song titles, but we suppose we can cut her some slack while she builds her billion-dollar empire.