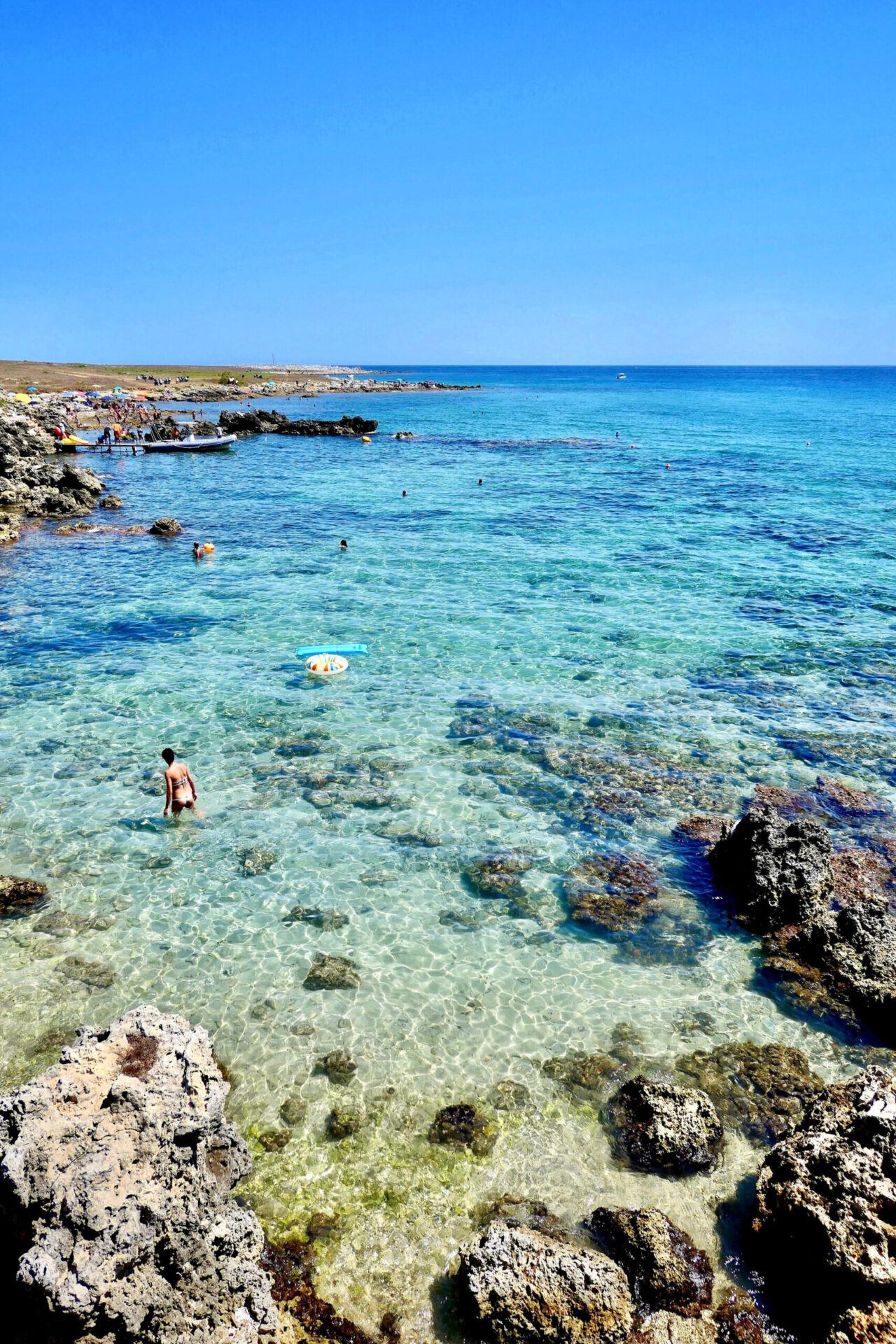 Day 11
I Travel Alone To the End of the Earth

On Sunday with a wake up call at dawn, I take Luca to the airport: he has a “real” job and can’t remote work like I can wherever there is Wi-Fi. After 10 days he’s tired and tanned, and I say goodbye, continuing my trip toward the Ionian coast, in (almost) complete solitude (I have at least three or four social engagements awaiting me). I drive straight towards Santa Maria di Leuca, de finibus terrae, because as the southernmost point of the region, it’s also the end of the road, a literal dead end. I listen to the Sunday mass outside in the courtyard of the sanctuary, and do a quick tour of the staircase that floods once a year, and then I take a stroll along the seaside inundated with souvenir stalls. I want to see the eclectic villas built starting in the 1800s in what was a fisherman village, elected as a vacation spot by the wealthy families of Salento. They used their might by engaging the most creative architects of the times, giving life to the most unique promenade in the world. Here the Adriatic and Ionian meet, where legend tells a tale of mermaids, but in reality here is where the Ionian coast begins, and it’s something else entirely.

Salento, the sun, the sea, the wind

If the Adriatic coast shows a family friendly aspect of Salento where nature still dominates parts of the coast and sand alternates with the rocks, the Ionian coast shows a different side. Marina di Pescoluse has been renamed the Maldives of Salento and Gallipoli is known as the Ibiza of Italy. Stunning waters, beaches with resort after resort all the way to the outskirts of Taranto. Young people crowd in Gallipoli, attracted by the nightlife and clubs (at least before Covid), while there are famous all-inclusive destinations like Porto Cesareo. In reality, if you stay in the interior of the region, the difference is established by the wind. If there is a northern or easterly wind you go to the Ionian side from Otranto to Luca, but if there is sirocco (a hot dry wind from North Africa) or westerly wind it’s best to go to the Adriatic coast north of Otranto. If you don’t understand any of it like me, there are websites and apps that tell you where to go.

Work dictates visiting places other than churches and historic towns, therefore I head to a newly conceived lux B&B, the Le Sei Conche Relais & Spa, invisible and tucked in the center of Ugento, in a cluster of connected houses with centuries of history. Bed and breakfasts are not like they used to be, they now offer exquisite hospitality, but with the level of intimacy of fewer rooms (and a pool, restaurant and spa…) In town I stayed at Castello di Ugento, a work of monumental restoration by the heirs of the D’Amore dynasty. They made use of the family castle: 1,500 square meters of frescoes, 4,500 of space, an interior courtyard, a gourmet restaurant and bar, a cooking school, and two Norman towers enclosed in the basement that will soon house a wine cellar. After six years of renovations, the future of the castle is yet to be decided, and the family is already planning exhibition spaces and bringing the castle back to the center of the city’s cultural life. An impressive project, conceived by sophisticated minds, beloved by many international guests, I hope it will lead by example, just like it did in Fasano and surrounding areas.