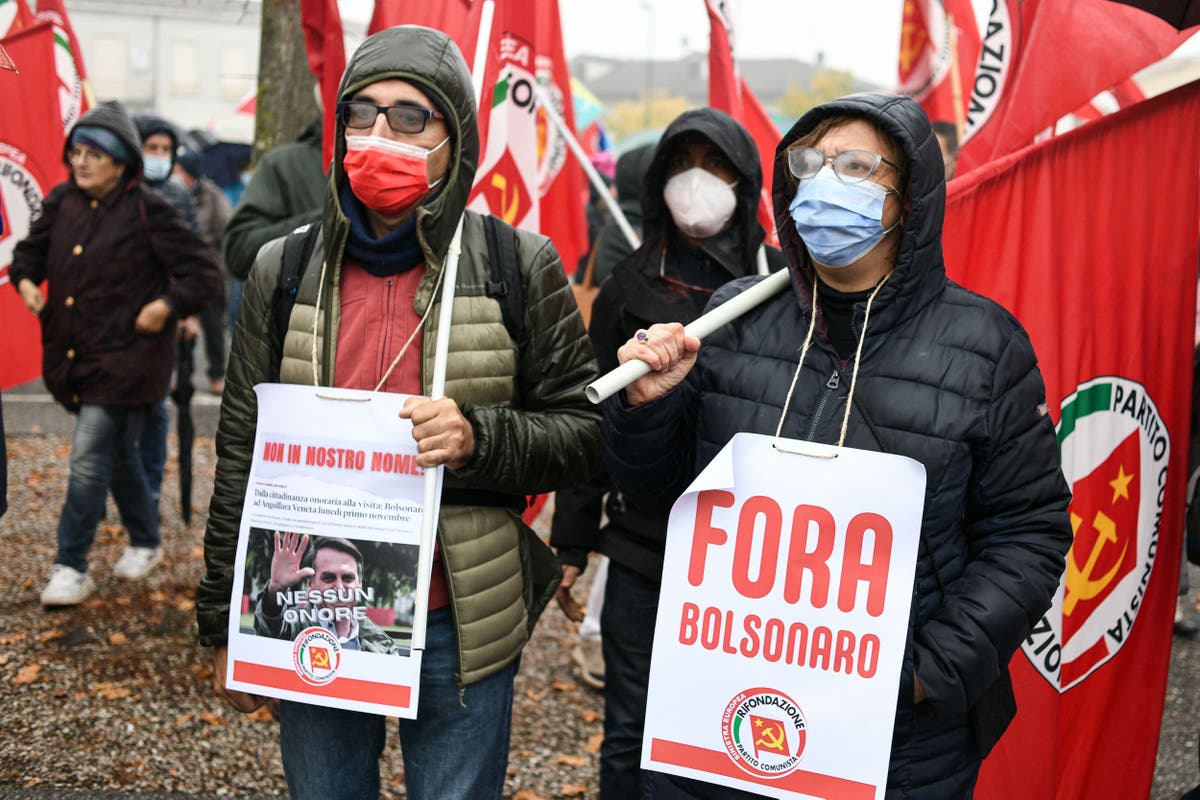 Italian police fired water cannons and used batons and tear gas to disperse hundreds of people protesting against Jair Bolsonaro in the province of Padua on Monday.

The Brazilian president’s great-grandfather Vittorio Bolzonaro was born in the city of Anguillara Vêneta, and was among a thousand people who had fled poverty in the Italian town and emigrated to Brazil in the 19th century. On Monday, the Paduan city hosted the president at a ceremony to grant him honorary citizenship.

Local media reported that tensions have been brewing in the city since Anguillara Vêneta’s far-right mayor Alessandra Buoso decided to grant Mr Bolsonaro the honorary citizenship.

The president went to Anguillara Veneta after attending the G20 summit in Rome over the weekend. He skipped the Cop26 climate talks in Glasgow.

On Monday, when he arrived in the city, Mr Bolsonaro was met with jeers as well as cheers. Some of his supporters had wrapped themselves in the Brazilian flag, while around 200 protesters held banners and placards that read “Justice for the Amazon” and “No citizenship for dictators”. Protesters had also spray-painted Fora Bolsonaro — “Bolsonaro Out” —  on the city hall last week.

After receiving the tribute, the president met other members of the Bolsonaro family in the country.

He said: “I’m here in Padua, the origin of the Bolsonaro family. It is a great emotion to meet relatives, right? It’s the first time we’ve come to Italy, so it’s good for us to review our roots because my grandparents went to Brazil in search of better days because of the difficulty Italy was having at the time. So it’s rewarding. I was well received here, thank you to everyone.”

The bishop of Padua labelled the city’s decision “a great embarrassment”, and some city councillors also opposed the move. Antonio Spada, a city councillor, said that Mr Bolsonaro has every right to visit Anguillara Veneta. But, he said that they do not consider “the act of granting him honorary citizenship appropriate, because an honorary citizenship means using him as a model and an example for the entire community”, according to The Washington Post.

Andrea Zanoni, an environment councillor, said the honorary citizenship was an “incomprehensible choice”, given the accusations of “crimes against humanity”, according to The Guardian.

Anguillara Vêneta’s mayor, Ms Buoso, has defended her decision, and slammed critics for objecting to it. In a Facebook post, she said that the city council’s decision was not a vote on his politics but just a recognition of all Italians who had emigrated to Brazil.

Back in his own country, Mr Bolsonaro is facing calls of impeachment, and a Senate report last month had suggested that the president should face criminal charges for his mishandling of the coronavirus pandemic, which has led to more than 600,000 deaths across the country.