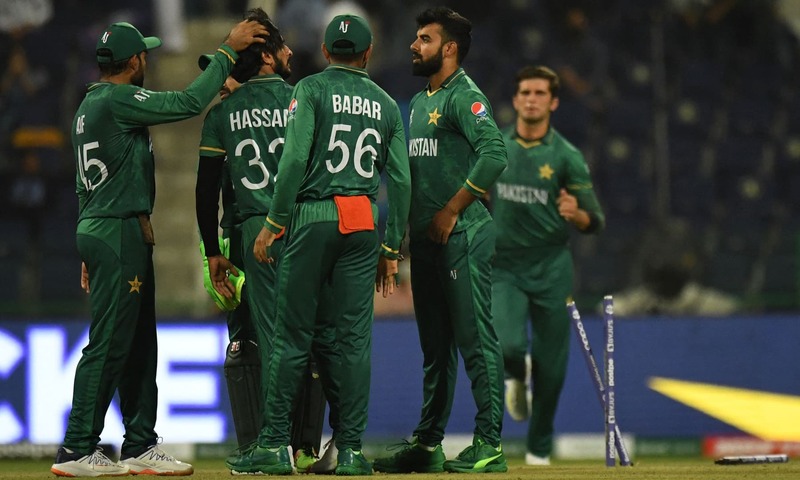 Pakistan continued their winning streak in the T20 World Cup after defeating Namibia, becoming the first team to reach the semi-finals.

The Green Shirts beat Namibia by 45 runs in Abu Dhabi, with brilliant half-centuries from Mohammad Rizwan and skipper Babar Azam.

The pair added 113 for the first wicket after Pakistan were slow out of the blocks, scoring just 59 in the first ten overs but ended with a flurry in the next ten, taking 130 runs.

Veteran Mohammad Hafeez scored a brisk 16-ball 32 not out with five boundaries.

With the team having made it to the semi-finals, fans were ecstatic and congratulations poured in on Twitter.

“Just the most magnificent run to the semi-finals. You have shown that excellence with humility is the tonic of success,” Raja said.

“Congratulations to the entire team as they continue making us proud with their splendid performances. Proud of you all,” he added.

PTI politician Shehryar Afridi, too, was all praises for batsmen Babar, Rizwan and Hafeez.

“High class innings by Rizwan. Baber was at his best too whereas Hafeez gently crisped 32 runs. 130 in the last ten overs was exceptional. Men in Green make the nation proud.”

Sports presenter Sawera Pasha, who went down memory lane, recalled that at this stage in most previous tournaments Pakistan would be worrying about “probabilities and what-if scenarios” to make it to the semi-finals.

“What an unbelievable time to be a Pakistan cricket fan!” she added.

“Go Pakistan go. This is amazing,” he tweeted.

Sports journalist Rehanul Haq was quick to congratulate the team for qualifying for the semi-finals even before the match was over.

“Officially through to the semi-finals. Well done Pakistan. Hats off to the entire team, all of them had so much pressure on them coming into this tournament,” he tweeted, adding, “Have to celebrate and cherish such moments especially considering all that happened leading into this World Cup.”

Former spinner Saeed Ajmal was quick to join him, among many others, in congratulating the team.

“Officially qualified for the semi-finals! All of the hard work by the boys has finally bore fruit!” he said.

Cricket writer Saj Sadiq was all praises for Rizwan for scoring a half-century. “Mohammad Rizwan — another milestone, another look to the heavens.”

President Arif Alvi extolled the team for “another good performance” in the tournament.

“Great batting [by] Rizwan, Babar and Hafeez. My dear Green Shirts you have the talent and skills, but it is finally in the mind that winning becomes a habit. You continue to make us proud,” he said.

A tweet by the Prime Minister’s Office also celebrated the fourth consecutive victory of the Pakistani team in the tournament and the their “impressive cricket”.

Human Rights Minister Shireen Mazari lauded the team for yet another win, while also acknowledging that Namibia played a “great game”.

Journalist Arfa Feroze Zake, lauded the “kamaal ki jodi” (excellent pair) of Babar and Rizwan for their “great ability to make a quick recovery of the strike rate”.

“And this makes their long presence on the crease dangerous for the opposition,” he said.

Header image: Pakistan’s cricketers celebrate after the dismissal of Namibia’s Michael van Lingen (not pictured) during the ICC men’s Twenty20 World Cup cricket match between Namibia and Pakistan at the Sheikh Zayed Cricket Stadium in Abu Dhabi on November 2. — AFP