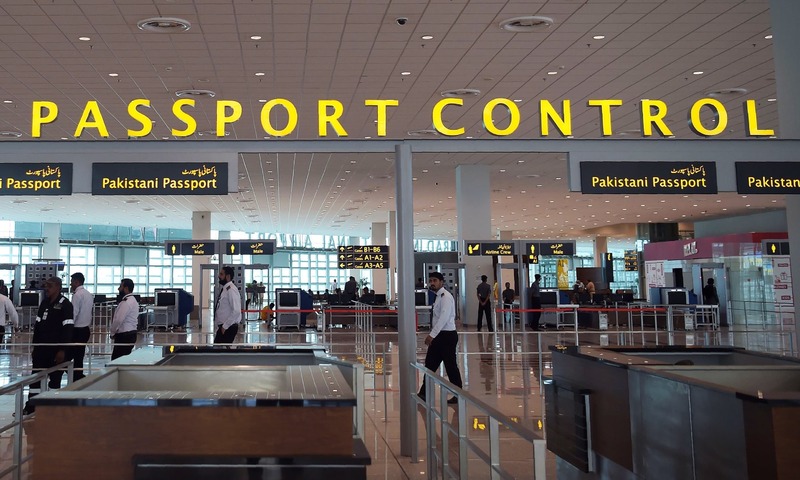 Pakistan placed a complete ban on Saturday on travel from seven countries in the wake of the discovery of a new variant of the coronavirus, Omicron, first detected in South Africa, according to a notification issued by the National Command and Operation Centre (NCOC).

These countries, the NCOC added, had been placed in category C — which includes nations from where people face restrictions and can only travel to Pakistan under specific NCOC guidelines — consequent to the emergence of the Omicron strain in South Africa and its spread to adjoining regions.

Hence, “a complete ban has been placed on direct [and] indirect inbound travel from these countries with immediate effect.”

Explainer: All we know about new Covid-19 variant Omicron

“Based on the emergence of the new covid variant, notification has been issued [to] restrict travel from 6 South African countries and Hong Kong,” he said, adding that the “emergence of new variant makes it even more urgent to vaccinate all eligible citizens 12 years and older”.

Protocols for travel ‘on extreme emergency’

Travel from the seven countries to Pakistan would be allowed “on extreme emergency”, provided that the travellers obtained the required exemptions and followed the needed health and testing protocols, according to the NCOC’s notification.

The health and testing protocols, as outlined in the notification, include having a vaccination certificate, a negative polymerase chain reaction test taken within 72 hours before boarding the plane and undergoing a rapid antigen test at the airport after reaching Pakistan. In case of a negative test result, travellers will have to home quarantine themselves for three days and undergo another rapid antigen test conducted by the civil administration on the third day. Those with positive results will have to quarantine for 10 days and undergo a polymerase chain reaction test on the 10th day.

But to “facilitate stranded Pakistanis, travel from these countries till December 5 will be allowed without exemption[s], though the above-mentioned health and testing protocols will remain applicable,” the notification said.

The NCOC also directed the Aviation Division, airport management, and the Airport Security Force to devise a mechanism for screening passengers travelling from the seven countries via indirect flights and share its details with all relevant departments by November 29.

The NCOC’s decision to ban travel from southern African nations follows similar decisions by a host of other countries wary of the spread of the new variant, Omicron, which the World Health Organisation (WHO) has classified as a “highly transmissible” variant of concern — the same category that includes the predominant Delta variant, which is still a scourge driving higher cases of sickness and death in Europe and parts of the US.

The variant was first detected in South Africa this week, with scientists holding it responsible for
a recent spike in Covid-19 infections in Gauteng, the country’s most populous province.

The discovery of the new coronavirus variant sent a chill through much of the world on Friday as nations raced to halt air travel, markets fell sharply and scientists held emergency meetings to weigh the exact risks, which were largely unknown.

The United Kingdom, United States, Canada, Russia, European Union nations and a host of other countries have restricted travel for visitors from southern Africa.

However, medical experts and bodies, including the WHO, have warned against any overreaction before the variant is better understood.