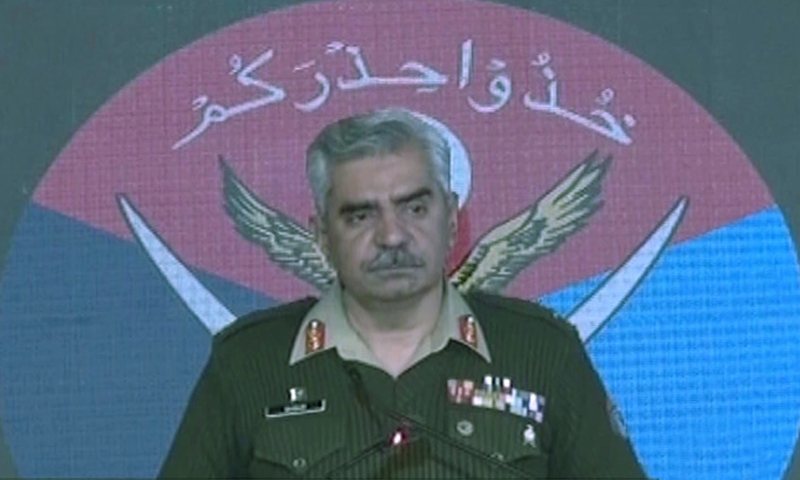 Inter-Services Public Relations (ISPR) Director General Maj Gen Babar Iftikhar on Wednesday said that fencing of the Pak-Afghan border will continue as planned, saying that it was being done to “protect people and not divide them”.

Maj Gen Iftikhar made these remarks in Rawalpindi during a press conference, his first of 2022, on the say the world observed Kashmiri people’s Right to Self-Determination Day.

“The ceasefire agreement that was signed with India … the biggest dividend was that the locals that live there, it improved their lives,” he said.

“At the same time, the blame from the Indian military leadership and false propaganda points to a specific agenda to remove attention from the atrocities in occupied Kashmir.

The DG ISPR accused India of putting the region’s peace at stake through its defence procurement. “It will have negative effects on peace. On the Line of Control, they have committed false propaganda about infiltration,” he said.

“They recently staged a fake encounter in Neelum Valley in Kirin sector and killed an innocent Kashmiri and then blamed us. In this particular incident, the Indian media ran pictures of a terrorist named Shabbir. He is not only alive but is at his home in Sharda.

“India has killed countless innocent people. The reality is that India wants to externalise the indigenous freedom struggle of the Kashmiris. But voices are coming from everywhere that the people are being targeted and their struggle is being stamped out.”

“On January 5, 1989, the people of Kashmir were promised the right to self-determination by the UN. That promise remains unfulfilled. On this occasion, we salute their (Kashmiri people’s) bravery.”

Pak-Afghan border fencing will protect people, not divide them

The DG ISPR then discussed issues related to the Pak-Afghan border, including its fencing, which he said was being to protect people and not divide them.

“During 2021, on the western border, the security situation was challenging,” Maj Gen Babar said. “The western border management, specifically the Pak-Afghan border … there were some specific local dynamics and these are [being] addressed at the relevant level.

The DG ISPR said that the Pak-Afghan border fencing was “94 per cent complete”, adding: “We are totally focused, and under the western border management regime, the work that is underway will be completed in some time.”

“The fence on the Pak-Afghan border is needed to regulate security, border crossing and trade. The purpose of this is not to divide but to protect them.”

“People can cross border from designated points,” he explained, adding: “This process will be eased in coming months. The blood of our martyrs was spilled in fencing of the border. It is a fence of peace. It will be completed and remain.”

The DG ISPR deemed the recent uprooting of the fence by Taliban fighters as “one or two localised problems”, which he said is being discussed by the governments of both the countries.

Review of armed forces’ performance in 2021

“In 2021, intelligence agencies issued 890 threat alerts, on the basis of which 70pc incidents were averted,” he said. “The masterminds and their facilitators were unmasked.”

“In tribal areas, more than 70,000 mines … were recovered and lives were saved. Many officials were injured and martyred during the process.”

“In 2021, 248 troops were martyred. We salute them and their families. [Their sacrifices] helped establish peace. More than 100,000 ammunition were also seized.”

“Under the National Action Plan (NAP), action was taken against terrorists. We can tackle extremism by focusing on the NAP. The ulema and media have also played their part. In Pakistan, no group or person can be allowed to take the law in their hand. Only the state can exercise this power.”

“In Balochistan, attempts to sabotage CPEC (China–Pakistan Economic Corridor) etc have failed. Despite these challenges we have not allowed any disruptions to development projects.”

Looking ahead, the army official said: “2022 also marks 75 years of our independence. We have faced all challenges and we have to play our part in making the country prosperous.”

‘Propaganda against institutions has failed’

The DG ISPR spoke of a “campaign” against national institution, which he said were hatched to create a a “gulf” between the masses and the institutions and to “damage people’s trust”.

“We are aware of these efforts and their various linkages,” he said. “[Those] who spew half-truths, fake news and false propaganda to target institutions and damage the country, have failed and will fail.”

No ceasefire with TTP currently, operations to continue

The DG ISPR said that talks with the banned Tehrik-i-Taliban Pakistan (TTP) are “on hold” but the operations are “ongoing”.

“The ceasefire [with the TTP] ended on Dec 9. They [the ceasefire] was a confidence-building measure taken ahead of talks with these violent non state actors on the request of the current afghan government.

“There was a requirement for the interim Afghan govt that TTP should not be using their soil against us so they said they would bring them to the table and make them accept what Pakistan wants. Obviously, those external conditions were yet to be settled.

“The TTP is not a monolith. They have internal difference. There were some problems … some conditions that were non-negotiable from our side so there is no ceasefire [right now]. We are continuing with operations and will continue till we get rid of this menace.”

During the question and answers session, when asked to comment on rumours of a deal with PML-N’s self-exiled leader Nawaz Sharif, the DG ISPR said: “I will only say that all of this is baseless speculation.

“If anyone is talking about a deal, please ask them who is doing the deal. What is the evidence of such a deal. There is no such thing.”