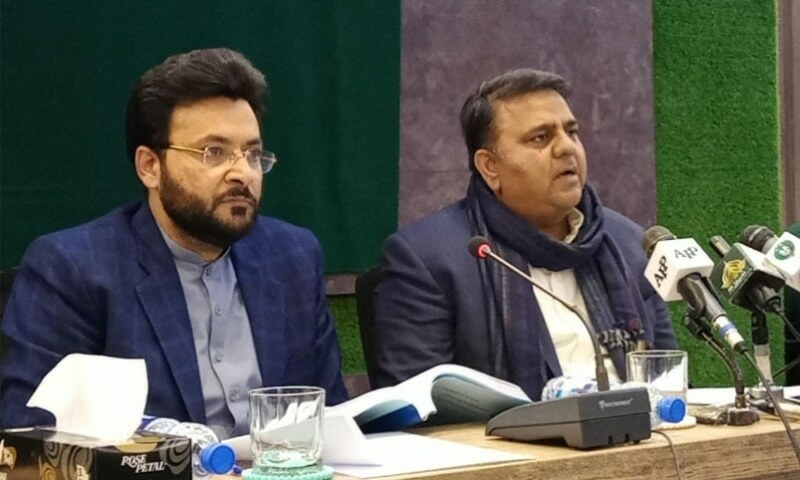 Information and Broadcasting Minister Fawad Chaudhry on Tuesday rubbished allegations of the PTI receiving foreign funding, adding that it was the only political party in the country that had created a “legal, detailed and elaborate” system for funding.

The minister’s comments came after a scrutiny committee submitted a report, which has not been made public yet, to the Election Commission of Pakistan (ECP) regarding the party’s funds. According to a report published by Geo News, the ruling party hid funds worth millions of rupees from the commission.

The Geo News report quoted the scrutiny committee as saying that the PTI provided “false information” regarding the party’s funding to the ECP, adding that the party had received Rs1.64 billion in funding and did not disclose funds worth more than Rs310 million to the ECP.

Addressing a press conference alongside Minister of State for Information Farrukh Habib, Chaudhry addressed media reports about the unexplained Rs310million in the accounts.

The information minister said there were two relevant transactions of Rs150m and Rs160m which had been duplicated and therefore counted twice by the committee.

“The transaction of Rs160m was counted twice because we received money in the central account and transferred it to another. So there was duplicity in the [scrutiny committee] report.”

In the same way, the Rs150m was transferred from the centre to the provinces from a PTI subsidiary which was also counted twice, he said, adding that these facts would be presented before the ECP during the arguments in the case.

Chaudhry said that the information taken from the State Bank of Pakistan [for the report] was from before the 2018 general elections. “The report is from before we came into power and from the tenure of the PML-N government.”

Highlighting the details of the report, the minister said it showed that the PTI had 26 accounts out of which eight were non-active.

“Out of the remaining 18 accounts, eight are functional which have transactions and also show funds coming in.”

He said 10 of the accounts in question did not actually belong to the PTI. “Six of the accounts are subsidiary accounts […] and the party has distanced itself from the remaining four.”

The minister claimed that it was now evident that there was “no question of foreign funding”, adding that PM Imran had always given a record of each and every single penny and the PTI had done the same.

Responding to a question from a reporter, the minister also said that it would be better if the ECP made the report public.

“We can’t make the report public, the ECP had to do it. And perhaps they should because [the report missing from public domain] perpetuates fake news.”

He added that the ECP should either ensure that the content of the report doesn’t make it to the media, or if it does [reach media] then the correct information should be released.

The minister further said that PTI workers across the world “fund” the party.

“People give $10, $25, $55 or $100,” he said, adding that people trust the prime minister with their money, especially since he had constructed the Shaukat Khanum Memorial Cancer Hospital.

He said that the hospital was able to provide free healthcare to 70 per cent of its patients as it received billions in donations on the basis of the premier’s name.

“The people trust the prime minister’s name which is also evident in our party organisation,” he said.

The minister also took the opportunity to thank the PTI’s chief accountant and his team for handling the party’s finances for an extended period of time, reiterating that the party had an “elaborate accounting system”.

Separately, PML-N Vice President Maryam Nawaz said that when those who cried “thief” were probed, it was revealed that they were “steeped” in corruption.

In a series of tweets, the PML-N leader said: “Collecting money in the name of funds, using it for luxuries and then spewing lie after lie to hide your thievery; has there ever been a more corrupt, dishonest and sneaky leader than Imran Khan in the country’s history?”

She said that the prime minister not only stole but also plundered the people’s wealth. “The heap of successive findings, leaks and evidence [against the government] is enough to get rid of PM Imran and the PTI. No other party [in the country] has faced such serious fraud [allegations] and scandals,” she said.

“Who would have guessed that the true face of the man dubbed ‘sadiq and ameen‘ (honest and righteous) by [former chief justice] Saqib Nisar would be so terrible,” she asked.

The foreign funding case against the PTI has been lingering since November 2014 when it was filed by the party’s founding member and now dissident Akbar Babar.

In his petition, Babar had alleged serious financial irregularities in the ruling party’s accounts, including illegal sources of funding, concealment of bank accounts within the country and abroad, money laundering and use of private bank accounts of party employees as a front to receive illegal donations from the Middle East.

PTI has consistently denied the accusations.

The ECP had in September 2020 trashed an “incomplete” report of its scrutiny committee on the foreign funding case. In an order, the commission said the report was neither complete nor well detailed.

Another report was submitted to the commission in November last year, about six months after the last deadline it was given.