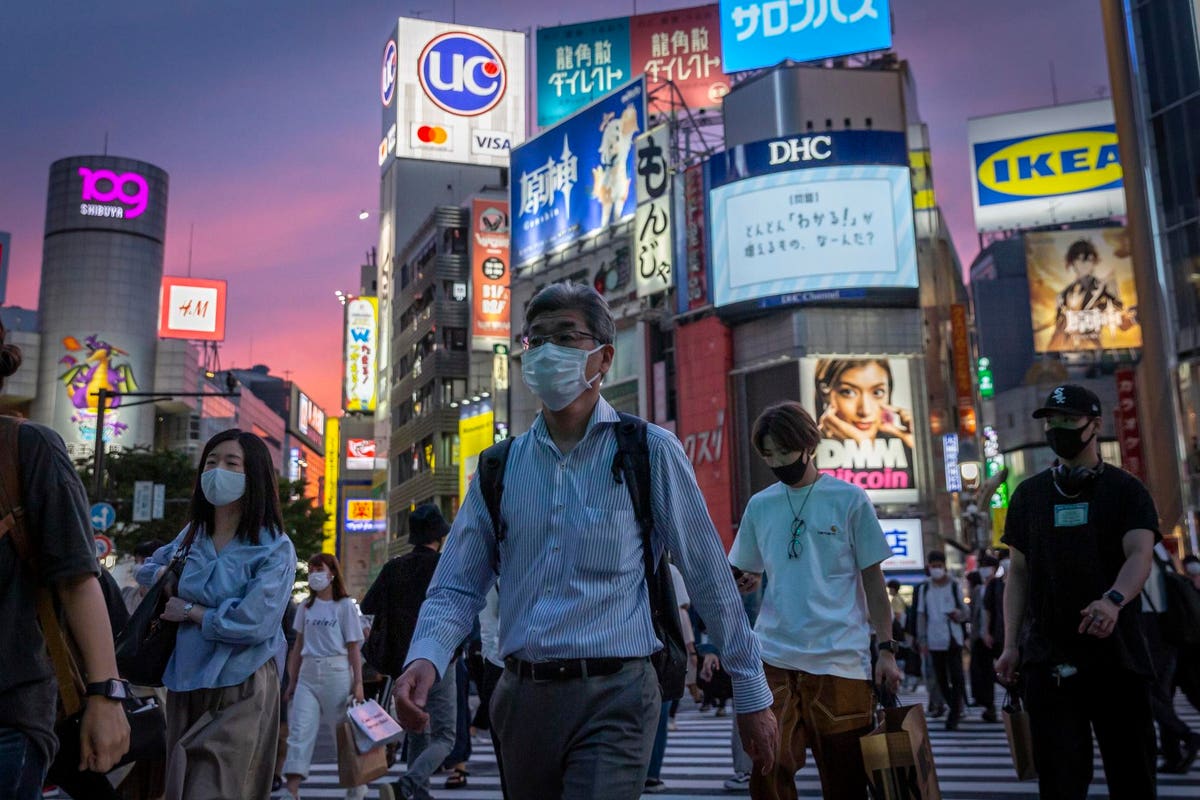 Here’s some of the latest “say-whatever-you-want-without-real-evidence” news. There have been claims online that ivermectin somehow helped Japan conquer the Covid-19 coronavirus pandemic. For example, Pierre Kory, MD, MPA, a critical care physician who has been pushing for the use of Covid-19 to prevent and treat Covid-19, recently tweeted out that “Tokyo in particular is kicking Covid’s [word that means butt] with IVM- fewest hospitalized since before pandemic:”

First of all, the severe acute respiratory syndrome coronavirus 2 (SARS-CoV-2) doesn’t have a butt that can be kicked. Instead, the virus is shaped like a round ball with many spikes. So perhaps you could say that you want to kick Covid’s balls.

Secondly, what evidence did Kory provide that Tokyo has been using IVM to do the said kicking? Here IVM presumably stands for “ivermectin” rather than “I varnish mangos.” Evidence-wise, his tweet seemed as soft as a feta-verse would be. All Kory did was include a graph of patients hospitalized for Covid-19 each day in Tokyo with a shaded portion labeled “after ivermectin recommendation.” How is this any different from labelling this portion as “after Lizzo and Cardi B released the song ‘Rumors’?” The question is whether this shaded portion actually means anything or whether it is shady.

One thing’s for sure: things have indeed changed dramatically for the better in Japan after the country had experienced a Covid-19 coronavirus surge in July and August. As I had covered previously for Forbes, during the first half of July, Japan’s Prime Minister Yoshihide Suga had declared a state of emergency in the country as cases of the SARS-CoV-2 Delta variant were growing. Then the Summer Olympics happened from July 23 to August 8, 2021, despite concerns that so many international visitors could further fuel a Summer Covid-19 surge. After the Olympics, the number of new reported Covid-19 cases each day did continue to rise rapidly, peaking at above 24,000 on August 25. Things weren’t looking good at the time.

Ah, but then the numbers dropped precipitously throughout September until dipping below 1,000 in early October. The tallies have stayed in the hundreds since then with the seven-day average as of November 25 being only 104 cases. In the words of Ron Burgundy, sort of, that de-escalated quickly.

So how did Japan manage to get the Covid-19 coronavirus under much better control over the past couple of months? Did Kory mention the non-pharmaceutical interventions in place such as face mask wearing and social distancing requirements? Did he acknowledge Japan’s relatively high Covid-19 vaccination rate? After all, by late October over 70% of the population had already been fully vaccinated, as the Japan Times reported. Now around 77% of the population is fully vaccinated, which is substantially higher than many countries, including the U.S. where only 59.1% have been fully vaccinated. Did he mention anything besides IVM?

Nope, nope, and heck nope. Instead, Kory and other social media accounts have been touting this so-called “ivermectin recommendation” that seemed to have occurred sometime in August, based on Kory’s shaded graph. What recommendation then have they been talking about and who specifically has made such a recommendation?

Whenever you have questions, what better place to go than anonymous social media accounts? The following tweet from such an anonymous account had a big arrow indicating “ivermectin allowed as a treatment in Japan 13th August” and claimed that “12 days after ivermectin was given the green light as a treatment for Covid in Japan, cases have all but plummeted:”

Green light? Is this tweet talking about to song “Green Light” sung by Lorde? That song mentioned “big teeth” but not ivermectin. Who exactly “allowed” or greenlit ivermectin in Japan then?

It didn’t seem to be the Japanese government. If you look at Japan’s Pharmaceuticals and Medical Devices Agency’s list of Approved Medical Products for Covid-19, you’ll find stuff like remdesivir and baricitinib but no ivermectin. And none of these ivermectin-touting tweets seem to be from real scientists and other experts from Japan. Because who cares what people in Japan actually think, right?

Well, the following tweet did mention a statement made by Haruo Ozaki, MD, Chair of the Tokyo Medical Association:

According a Nikkei article, in the press conference, Ozaki urged the use of ivermectin for those infected with the Covid-19 coronavirus since it “has been shown to be effective in preventing aggravation overseas.” Ah, but here’s the question: what kind of Covid-19 authority is Ozaki? Why should anyone listen to what he says about the virus?

As you can see, this last tweet from @brenontheroad somehow jumped from mentioning Ozaki to mentioning Japan’s government. Isn’t that a bit like mentioning some doctor in the U.S., like Kory, and then mentioning the National Institutes of Health (NIH) or Centers of the Disease Control and Prevention (CDC)? Kory certainly doesn’t represent the position of the NIH or CDC. The NIH Covid-19 Treatment Guidelines state that “there is insufficient evidence for the Covid-19 Treatment Guidelines Panel (the Panel) to recommend either for or against the use of ivermectin for the treatment of Covid-19. Results from adequately powered, well-designed, and well-conducted clinical trials are needed to provide more specific, evidence-based guidance on the role of ivermectin in the treatment of Covid-19.” Similarly, there’s no indication that Ozaki somehow represents the position of the Japanese government.

What about this Tokyo Medical Association that Ozaki apparently chairs? Alas, it is not an official government organization. It’s not an academic organization either. It’s not even any type of research or scientific organization. Instead, it’s a local professional organization, analogous to the San Francisco Marin Medical Society or the Philadelphia County Medical Society. In the U.S., you can join such local medical associations as long as you are some kind of physician and regularly pay your dues.

In general, it’s absurd to point to one event or what one person said and then claim that it was responsible for the subsequent drop in Covid-19 coronavirus cases. Heck a lot of other things happened on August 13. That day was International Left Handers Day as well. Could left handers rejoicing around the world and making left handed comments somehow have made a difference in Japan? Or what about World Rock Paper Scissors Day on August 27?

Such ivermectin-touting social media posts have not provided any real scientific evidence behind their claims. What’s needed are hard facts. For example, how many people in Japan actually ended up taking ivermectin? What happened after they took ivermectin? How did this compare with people who did not take ivermectin? Just because something happened after an event doesn’t mean that the event was the cause. Otherwise, you could blame Justin Timberlake leaving *NSYNC in 2002 for the Great Recession in 2008. Or the fly that landed on then-Vice President Mike Pence’s head for last Winter’s Covid-19 surge in the U.S.

The ivermectin claims aren’t the only claims about Japan floating around on social media. Some are insisting that the SARS-CoV-2 has mutated itself out of existence in the country. Mutated itself to extinction? Such a scenario would be highly unusual. Typically natural selection would favor versions of the virus that would be better able to survive and spread rather than a version that would plunge itself into extinction. Again such claims fail to account for the vaccination programs and other Covid-19 control measures that have been implemented in Japan.

Plus, the pandemic is not over in Japan. The SARS-CoV-2 is not extinct in Japan, unless by extinct you mean still around. If you’re waiting for the SARS-CoV-2 to go extinct, you’re going to need a whole lot more than all the episodes of the Netflix show Selling Sunset to pass your time. This virus is probably going to be around for a long, long time well after the pandemic is over.

These ivermectin claims about Japan are just the latest in what’s become a septic tank of unsupported ivermectin claims on social media. If ivermectin were a celebrity, it would have a bunch of publicists to thank. Maybe it would even have its own reality show. Regardless, the reality is that these social media accounts still can’t seem to provide enough real scientific evidence supporting the use of ivermectin against Covid-19.