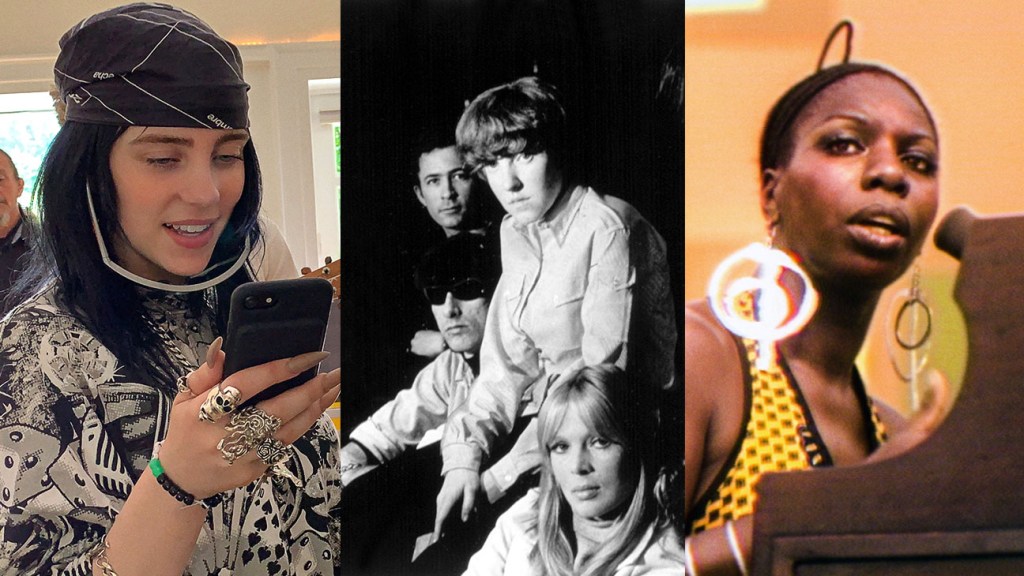 In the last decade, three music-centered films have earned the Academy Award for best documentary feature: Searching for Sugarman in 2012, 20 Feet From Stardom in 2013 and Amy in 2015. This year, three of the 15 Oscar-shortlisted documentary features in contention for the award are similar docs that offer intimate looks at their subjects, each taking different approaches to capture their musical talents at specific points in time.

Apple TV+’s Billie Eilish: The World’s a Little Blurry is an intimate look at the eponymous singer-songwriter, tracking her rise to seemingly overnight pop stardom. Directed by R. J. Cutler (known for 2009’s The September Issue, which had similarly unfettered access to the inner workings of Vogue magazine), The World’s a Little Blurry captures a then-17-year-old Eilish as she records her debut album, When We All Fall Asleep, Where Do We Go?, with her brother, Finneas, in their bedrooms at their parents’ house in Los Angeles.

Cutler’s great fortune of capturing Eilish on the brink of her superstardom gives insight into the life of the young singer and her close-knit family in ways a more seasoned performer may not have allowed. Missing are the tropes of a career-spanning musical retrospective — Eilish is still too fresh to have experienced the second half of a rise-and-fall narrative — but the film does examine Eilish’s own relationship to her sudden celebrity as a teenager. While we see her interacting with fellow megastars Katy Perry and Justin Bieber (the latter Eilish’s own musical hero), the film focuses more on Eilish the young woman whose life is about to change forever. (An Oscar nod for the film could be just one reason for the pop star to attend the ceremony; her title track for the most recent James Bond film No Time to Die is also shortlisted for best original song.)

Todd Haynes’ The Velvet Underground, also on Apple TV+, is the Oscar-nominated writer-director’s first venture into documentary filmmaking. Looking back at the influential band formed by John Cale and Lou Reed who provided the soundtrack to New York’s avant-garde art scene in the 1960s, the film is a celebration of a musical and artistic movement that ultimately inspired Haynes as a filmmaker. Leaning heavily into the Andy Warhol-centered social scene, the film is an ode to the artists and musicians who frequented the Factory — Warhol’s hub of creative energy.

Featuring a treasure trove of archival footage and talking-head interviews, the latter shot in the style of Warhol’s Screen Tests, Haynes’ documentary maintains an esoteric and idiosyncratic style — it’s a nonfiction effort from a narrative filmmaker that stands alongside his music-driven features, the glam-rock drama Velvet Goldmine and the playful Bob Dylan biopic I’m Not There. Yet instead of interpreting the lives of Cale, Reed and their collaborators through inventive storytelling like his feature films, Haynes lets them speak for themselves, offering the occasional critical lens to depict how these boundary-pushing artists impacted popular culture.

Hulu’s Summer of Soul was an immediate hit at last year’s Sundance Film Festival, and since its June premiere on the streamer the film has garnered numerous honors on its path to a presumptive Oscar nomination. Helmed by Ahmir “Questlove” Thompson in his directorial debut, Summer of Soul assembles a treasure trove of footage from the Harlem Cultural Festival, a concert series held in Mount Morris Park that unfolded across six weekends in 1969. The talent lineup was incredible — musical acts included Nina Simone, David Ruffin, Stevie Wonder, B. B. King, Gladys Knight and the Pips, Sly and the Family Stone, The Staple Singers and Mahalia Jackson — and the concerts drew 300,000 people to celebrate Black identity and creativity at a turning point for American pop culture.

But as the film’s Gil Scott Heron-inspired subtitle — Or, When the Revolution Could Not Be Televised — suggests, this incredible moment in music history was largely lost to time, overshadowed by the other culture-shifting musical event that took place that summer hours north of the city in Woodstock. Perhaps Questlove’s name recognition helped unearth the recordings from the Harlem Concert Festival, but the musician-turned-filmmaker’s celebration of Black music and culture does more than provide access to the concert footage for the first time. It captures a moment in time when Black achievement and creativity began to enter the mainstream while doubling down on the notion that artistry is also a form of resistance, strength and pride.