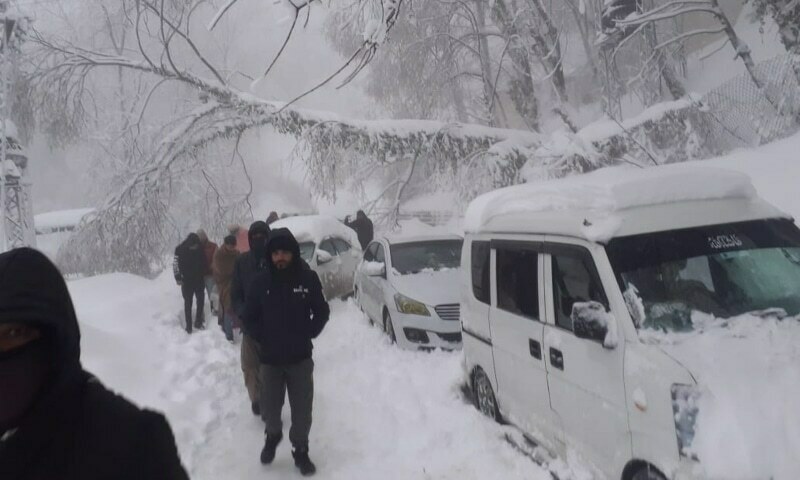 Murree was declared calamity hit on Saturday after at least 22 people froze to death in cars stranded in snow amid a glut of tourist influx.

Television footage showed that thousands of cars loaded with tourists were still stuck on the routes leading to the hill station on Saturday evening, hours after Punjab Chief Minister Usman Buzdar issued instructions to expedite rescue work and provide aid to the stranded tourists.

However, in a tweet in the evening, Buzdar claimed that all those stranded had been moved to government rest houses and hotels, adding that they were being provided with food, medicines, blankets and other essentials.

Meanwhile, entry of cars into Khyber Pakhtunkhwa’s Galiyat was banned, according to the province’s chief minister.

A list issued by Rescue 1122 said 22 people died, including 10 children. The deceased include an assistant sub-inspector of Islamabad police and seven members of his family.

Interior Minister Sheikh Rashid Ahmed, in a video message, said tourists had flocked to the hill station in such large numbers “for the first time in 15 to 20 years which created a big crisis”.

He said Rawalpindi and Islamabad administrations, along with police, had been working to rescue those stranded, while five platoons of the Pakistan Army, as well as Rangers and Frontier Corps, were called on an emergency basis.

The minister said that around 1,000 cars were stuck on the hill station.

Ahmed said that residents of Murree provided food and blankets to stranded tourists, adding that the administration had closed all routes to the hill station and was now allowing only vehicles planning to take food and blankets.

“God willing, we will rescue 1,000 cars by evening today. We have decided to stop people [travelling] on foot as well. It is no time for [pedestrian] tourists to visit.”

The Pakistan Meteorological Department had predicted heavy snowfall in Murree and Galiyat from January 6 to 9.

In a statement issued by his office, the chief minister said that rescuing stranded tourists was the “foremost priority”, adding that all rest houses and state buildings had been opened to them.

The process to rescue the tourists has been expedited while food and essential items are also being provided, Buzdar said.

He also expressed sadness over the deaths of people stuck in the snow, saying he was with the families in their grief.

The chief minister shared the same in a tweet later in the day, saying he had issued orders to accelerate work to rescue citizens stuck in the snow and send more machinery from Rawalpindi.

More than 23,000 cars were evacuated from the area the night before and the rescue operation was going on, he shared. Buzdar appealed to people to strictly follow instructions given by the police and district administration and cooperate with them.

Pakistan Army troops reached Murree to help with the rescue work. In a statement, the Inter-Services Public Relations (ISPR) said army engineers also reached the area to help open up the main highways.

The military’s media wing later said that its engineers had cleared Murree Expressway.

“Heavy machinery from Murree, army engineers division and FWO are working without any pause to assist people who are struck,” the ISPR said, adding: “Where machinery can’t reach, troops have been moved and they are clearing traffic and opening roads.”

In the evening, the ISPR said all stranded people will be shifted to five relief camps set up by the army in Murree.

Meanwhile, some of the tourists who remain stranded, told Geo News that the civil administration was nowhere to be seen, adding that rescue and relief work was being carried out by Pakistan Army officials only. They praised army officials for reaching out to them, giving them food items and making efforts to clear the roads.

Complete ban on entry of cars into Galiyat

In a statement, KP Chief Minister Mahmood Khan said he was keeping a close eye on the situation in Galiyat which has also been overcrowded with tourists in the current winter season.

The entry of cars into Galiyat has been banned completely, he said, adding that no untoward accident had occurred in the area where three feet of snow fell a day earlier.

The chief minister added that tourists who had been stranded in cars were rescued and shifted to rest houses and hotels. “Galiyat Development Authority, Rescue 1122 and local administration have been put on high alert to deal with any untoward situation,” he said.

Khan also instructed all deputy commissioners to ensure that all homeless people in the province were moved to shelter homes amid the snow and rain and no one slept in the open.

“All agencies have been mobilised. Army, 1122, Hazara div(KP) and Pindi div (Punjab) resources are mobilised to open up [and] clear the blocked areas,” he added.

Later, the prime minister tweeted himself, acknowledging that district administration was “caught unprepared” due to “unprecedented snowfall and rush of people proceeding without checking weather conditions”.

“[I] have ordered an inquiry and putting in place strong regulation to ensure prevention of such tragedies.”

‘Where was the government?’

Meanwhile, opposition political leaders criticised the government for its handling of the influx of tourists and inadequate preparation.

Leader of the Opposition in the National Assembly and PML-N President Shehbaz Sharif said he was heartbroken over the tragedy in Murree and questioned who was responsible for the deaths.

“Where was the government all the while? What arrangements did it make to deal with such an influx? Incompetence is fast turning into criminality. Prior arrangements & round the clock supervision were the normal SOPs in the past,” he tweeted.

Terming the deaths heartbreaking, PPP Vice President Sherry Rehman said governments “needed to be more vigilant about the flood of tourists on the Galiyat routes”.

“Instead of seeking more tourists govt should have given a warning for jammed roads. These were tragic & avoidable losses which no one intended, but no one acted in time either. Lessons need to be learnt,” she added.

“The job of governments is not only to count tourists but also to make advance arrangements and security measures for them […] These deaths are not due to snowfall, but due to government negligence,” tweeted PML-N Vice President Maryam Nawaz.

Later, Federal Information and Broadcasting Minister Fawad Chaudhry responded to the criticism, saying “it is unfortunate that the opposition is playing politics over the matter.”

Addressing a press conference alongside Education Minister Shafqat Mahmood, he said, “The opposition’s politics, however, does not hold any importance.”

“They will criticise no matter what,” the minister said, adding that the government was fully alert.

“We are [standing] behind our people and the situation is improving. The [Muree] Expressway is now open and more routes will be opened soon,” he said.

It is pertinent to mention that Chaudhry had earlier in the week cited the arrival of around 100,000 tourist vehicles to the hill station as a sign of “increase in prosperity and income of common man”.

Speaking to DawnNewsTV, he railed against the local administration for their “mismanagement”, saying that the death of a police officer and his family were wholly due to “departmental and administrative laziness”.

He also criticised the interior minister’s notification of shutting down Murree, saying it had spread fear and panic among the people.

The secretary general also contested declaring the area “calamity hit”, saying that such a tag was for sudden acts of God and not for situations such as this where the Met office had predicted the rough weather “10 days ago”.

Earlier today, Chaudhry also appealed to people to not visit the hill station.

“A large crowd [is headed towards] Murree and hilly areas. Hundreds of thousands of cars are travelling to these areas. It is impossible for the local administration to provide facilities to people in such a large number,” he tweeted.

Chaudhry urged those people who were at home to delay their travel plans to those areas for some time.

A large number of people were stranded and flights faced delays as rain continued to lash the federal capital and Rawalpindi for the fourth consecutive day on Friday.

Due to continuous snowfall and traffic congestion in Murree, the district administration imposed a ban on entry of more vehicles.

Snowfall, which began on Tuesday night, continued with regular intervals, attracting thousands of tourists. However, due to the rush of visitors, many families ended up getting stranded on roads. It has been reported that over 100,000 vehicles entered the hill station.

In a statement, Chief Traffic Officer Taimoor Khan said entry of vehicles into Murree had been banned from Friday night onwards and cars were being diverted from toll plazas and other entrances.

He said since snowfall started on Monday morning, more than 155,000 vehicles had entered Murree and 135,000 had so far left.