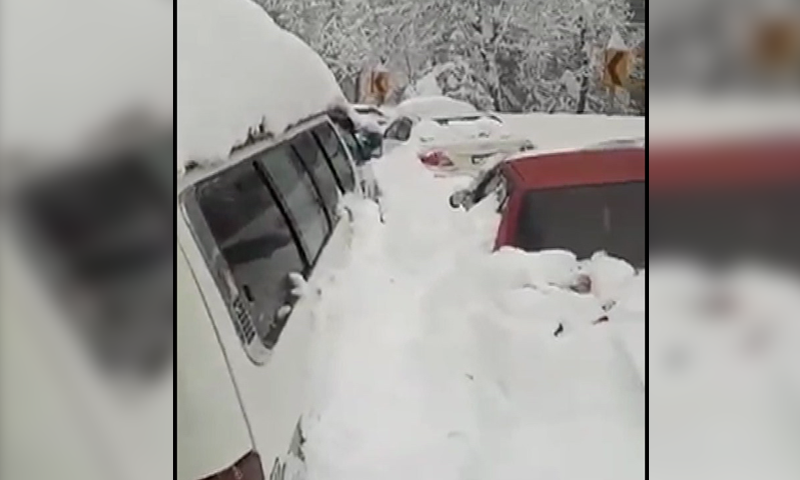 Interior Minister Sheikh Rashid Ahmed on Saturday said that 16 to 19 people died in Murree after their cars were stranded because of snowfall and traffic congestion.

In a video message, he said tourists had flocked to the hill station in such large numbers “for the first time in 15 to 20 years which created a big crisis”.

He said Rawalpindi and Islamabad administrations, along with police, had been working to rescue those stranded, while five platoons of the Pakistan Army as well as Rangers and Frontier Corps were called on an emergency basis.

The minister said that around 1,000 cars were stuck on the hill station, confirming that “16 to 19 deaths have occurred in their cars.”

Ahmed said that residents of Murree provided food and blankets to stranded tourists, adding that the administration had closed all routes to the hill station and was now allowing only vehicles planning to take food and blankets.

“God willing, we will rescue 1,000 cars by evening today. We have decided to stop people [travelling] on foot as well. It is no time for [pedestrian] tourists to visit.”

In a statement issued by his office, the chief minister said that rescuing stranded tourists was the “foremost priority”, adding that all rest houses and state buildings had been opened to them.

The process to rescue the tourists has been expedited while food and essential items are also being provided, Buzdar said.

He also expressed sadness over the deaths of people stuck in the snow, saying he was with the families in their grief.

The chief minister shared the same in a tweet later in the day, saying he had issued orders to accelerate work to rescue citizens stuck in the snow and send more machinery from Rawalpindi.

More than 23,000 cars were evacuated from the area the night before and the rescue operation was going on, he shared. Buzdar appealed to people to strictly follow instructions given by the police and district administration and cooperate with them.

Earlier today, Federal Minister for Information and Broadcasting Fawad Chaudhry also appealed to people to not visit the hill station.

“A large crowd [is headed towards] Murree and other areas. Hundreds of thousands of cars are travelling to these areas. It is impossible for the local administration to provide facilities to people in such a large number,” he tweeted.

Chaudhry urged those people who were at home to delay their travel plans to those areas for some time.

A large number of people were stranded and flights faced delays as rain continued to lash the federal capital and Rawalpindi for the fourth consecutive day on Friday.

Due to continuous snowfall and traffic congestion in Murree, the district administration imposed a ban on entry of more vehicles.

Snowfall, which began on Tuesday night, continued with regular intervals, attracting thousands of tourists. However, due to the rush of visitors, many families ended up getting stranded on roads. It has been reported that over 100,000 vehicles entered the hill station.

In a statement, Chief Traffic Officer Taimoor Khan said entry of vehicles into Murree had been banned from Friday night onwards and cars were being diverted from toll plazas and other entrances.

He said since snowfall started on Monday morning, more than 155,000 vehicles had entered Murree and 135,000 had so far left.

The Pakistan Meteorological Department had predicted heavy snowfall in Murree till Sunday evening.