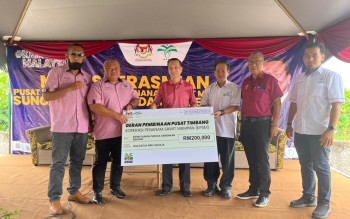 SANDAKAN, June 21 (Bernama) — The Malaysian Palm Oil Board (MPOB) will set up mobile counters in Sabah in the near future to help smallholders facing problems in renewing their MPOB license.

Deputy Plantation Industries and Commodities Minister Datuk Seri Dr Wee Jeck Seng said this was a  problem faced by most smallholders in the state.

“Besides that, MPOB will help if there are other issues… that is why we go down to the field, not only to gather information, but if there is an issue that can be resolved immediately, we will do it immediately. If not, it will be taken to the ministry level,” he said.

He was speaking to reporters after officiating at the Sungai Sibuga Sandakan Bhd Sustainable Oil Palm Growers Cooperative Weighing Centre near here today.

Meanwhile, Wee said the Fresh Fruit Bunch Electronic System (e-FFB) is expected to be implemented nationwide this year, after the system’s pilot project was carried out in Tanjung Piai, Johor since April last year.

“The system allows transactions to be more transparent, and can resolve issues, especially the issue of fresh fruit bunch theft so that smallholders receive the income they deserve,” he said.