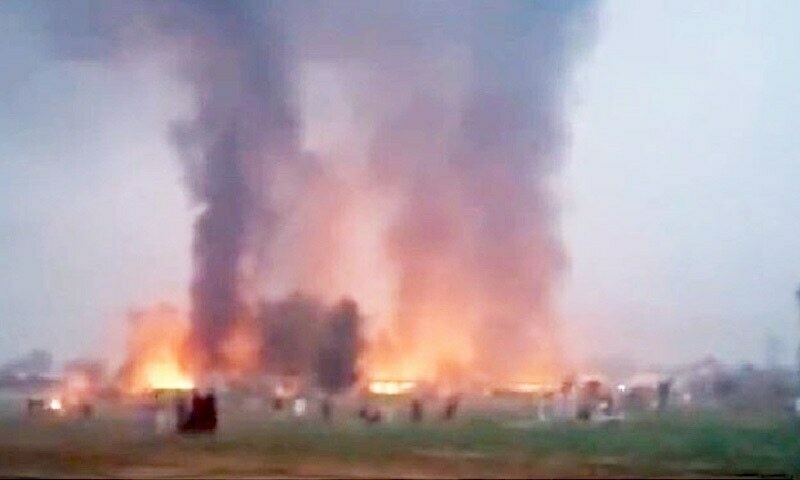 A mob attacked and set on fire a police station in Khyber Pakhtunkhwa’s Charsadda district on Sunday, demanding that authorities hand over a man arrested for allegedly desecrating the Holy Quran.

KP Law Minister Fazal Shakoor Khan, who hails from Charsadda, told Dawn.com that police had arrested a man for allegedly desecrating the Quran on Sunday and shifted him to the Mandani police station in Charsadda’s Tangi tehsil.

He told Dawn.com that police managed to shift the suspect to a safe location.

“The government will not allow anyone to take the law into their own hands,” he said. “The suspect who has been arrested will be proceeded against in accordance with the law.”

The minister added that the situation was still tense in the area.

Given the current law and order situation, police have yet to release more details about the man in custody and the complaint against him. Police also did not confirm any casualties in the violence.

Peshawar Division Commissioner Riaz Mehsud confirmed the attack, saying 4,000-5,000 people had ransacked the police station and a police post in their pursuit for “mob justice”.

He added that the man is in police custody and is safe.

Following the attack, the mob staged a sit-in on Harichand Road. But late at night, Mehsud said the administration had controlled the situation with the help of local religious elders, and the mob had ended the sit-in and dispersed.

Earlier, Charsadda police spokesperson Shafiullah Jan confirmed that a mob had attacked the police station and that the situation was tense in the area. He added that police were trying to control the situation.

“The mob was angry and police failed to control it,” a police official requesting anonymity told Dawn.com.

“The situation is still tense and police personnel from other areas have also reached the spot to control the mob,” he said.

Eyewitnesses said the police had used tear-gas shelling and aerial firing to disperse the mob.

Another police official said that the police station had been completely destroyed, adding that a number of vehicles and police records had also been lost to the fire.

The mob also attacked and set ablaze a police check post on Harichand Road and also blocked the road for traffic, a police official told Dawn.com.