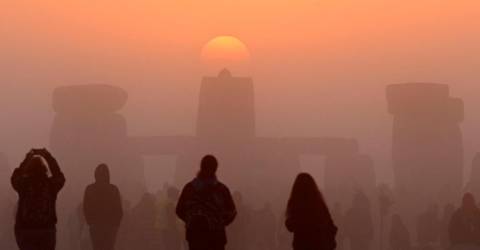 STONEHENGE: The sun was long overdue on Tuesday but when it finally appeared, faces lit up and arms rose as one to greet the summer solstice at Britain’s most famous prehistoric monument.

The sun was scheduled to come up on the longest day of the year at 4:49 am (3:49 GMT) but was shy in a sky as hazy as the minds of many of the midsummer revellers who spent the night at the sacred site.

Around 6,000 people gathered for the sunrise and sunset at 9:27 pm, according to the site’s manager and police, during the first public summer solstice at Stonehenge since the coronavirus pandemic wreaked havoc in 2020.

Stonehenge was built in stages, from around 3,000 BC to 2,300 BC, and the standing stones are aligned with the movements of the sun.

“We might see it at about 10 o’clock!” joked Jade Tetlon, who made a spur-of-the-moment decision to come with a friend and his daughter for her first solstice at Stonehenge.

Surrounded by soft melodies from flutes, drums, birds singing and sheep bleating but also the trucks rumbling on the main road nearby, Tetlon, 35, immersed herself in the site’s unique atmosphere.

The smell of incense and cannabis floated in the air, despite a ban across the country and a sign at the site’s entrance.

At 5:08 am, the sun finally appeared, serenaded by whistling and cheers but also joined by a collective rise of mobile phones in the air to immortalise the moment.

Two women wearing artificial garlands of flowers in their hair, opened and closed their arms to welcome the summer sun’s “new energy” which one of them, Joanna Willman, said was so strong at Stonehenge.

A short distance away, a handful of men in togas performed yoga facing the sun, surrounded by the rubbish of the crowds.

Another group, including some with earphones, held hands in concentric circles while gently swaying before hugging each other, moved by the moment and smiling.

“Stonehenge is the most architecturally sophisticated prehistoric stone circle in the world,“ according to the UN cultural organisation UNESCO, which classified it a world heritage site in 1986.

A theory emerged in the 17th century that Stonehenge was constructed by Celtic Druids but that has since been dismissed by historians.

The ancient stone circle remains an enigma. Academics and other experts debate over the site’s purpose, with some arguing it was a place of worship while others believe it may have been used by ancient astronomers for observation.

During a ceremony before the sun rose, the Archdruid of Stonehenge, Rollo Maughfling, chanted for peace at the four compass points, with invitations to the sun and the earth, sung in unison by some of those attending.

There were also chants for the release of WikiLeaks founder Julian Assange, for “peace between Russia and Ukraine” and an end to climate change.

“People always seem to be very respectful whenever we go into doing ceremonies,“ he told AFP.

But a few newcomers, he said, sometimes tried to defy a ban on climbing on the stones.

Heather Sabire, the site’s curator, said despite the stones’ size, the monument is “fragile”, adding: “There are a lot of features that you can’t see with the naked eye.”

She said many “enjoy being at Stonehenge because it’s so special”.

Some hold their own ceremonies, “it’s almost like a place of worship for them”.

So much so, there were scenes of almost holy embraces and communion with the stones.

The event ended with only two arrests: one for an assault, the other related to drugs.

But there have been more tumultuous times at Stonehenge.

On June 1, 1985, anti-riot police intervened to stop a “freedom convoy” protesting against an exclusion zone at Stonehenge put in place to protect the site.

Both sides dispute what happened at the event, during which police arrested 400 and many were injured, but it was 15 years before the site was again open for the solstice. – AFP