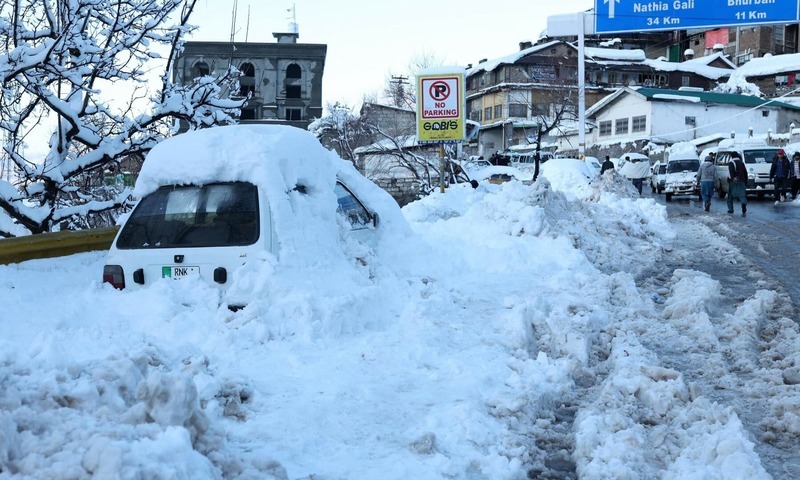 ISLAMABAD: Relevant government departments, including the National Disaster Management Authority (NDMA) and the Rawalpindi district management, failed to take any preemptive measure despite heavy snowfall warnings issued days prior to the disaster in Murree which claimed 22 lives.

No prior meeting was called by the NDMA with the district administrations of Rawalpindi, Islamabad and other departments to discuss traffic and accommodation issues in the hill station.

The Met Office had issued alert on Jan 5 that heavy snowfall may cause road closures in Murree, Galiyat, Nathiagali, Kaghan, Naran and other areas from Jan 6 to Jan 9 afternoon.

“All authorities concerned are particularly advised to remain ‘alert’ during the forecast period,” the Met Office had stated.

Murree received 6.5 inches of snowfall on Jan 5 (Wednesday), followed by 8.5 inches the next day while 16.5 inches were recorded from the morning of Jan 7 (Friday) up to Saturday morning.

“This is normal snowfall for Murree,” an official of the Met Office said.

Apart from posting such information on its website, these alerts and relevant information are forwarded to a large number of government departments by the Met Office directly.

However, soon after that on Jan 5, the administration of Murree tehsil issued a travel advisory, suggesting that tourists should get weather updates and traffic-related information prior to travelling to the hill station.

Since Murree is a tehsil of Rawalpindi district, no emergency meeting was convened by the deputy commissioner to assess the ground realities.

However, Rawalpindi Deputy Commissioner Mohammad Ali said on social media that an enhanced number of traffic wardens were deployed under the supervision of inspectors at all important points to facilitate tourists and regulate traffic flow.

In their tweet, the Rawalpindi police said on Jan 5 that the town had a parking capacity of nearly 3,500 vehicles while over 80,000 vehicles had entered Murree in the last two days.

When asked why the entry of tourists was not stopped at the toll plaza after Bhara Kahu, Mr Ali said all the entry points in Murree tehsil were closed after 6pm on Friday but it created another chaos as people continued pouring in from Khyber Pakhtunkhwa and Punjab.

Meetings held by the NDMA with the Rawalpindi and Islamabad district administrations only discussed urban flooding in the twin cities.

“There was a possibility that the NDMA did not anticipate the disaster in Murree,” said a senior official of the Punjab government.

While relief and rescue efforts were underway for safe evacuation of stranded people in Murree, the NDMA developed coordination with the relevant agencies, including the army, Rescue 1122, Rawalpindi district administration and the police department, on Saturday.

Army personnel have been called in to extend support to the vehicles stranded on roads which were blocked as there was no space to move ahead in the Murree city.

Talking to electronic media, NDMA Chairman Lt-Gen Akhtar Nawaz said joint efforts were being made to shift the stranded people to safe areas.

“Many people have already been transferred to safe areas and with the help of the district administration all commercial places including restaurants have been directed to make arrangements to accommodate additional people,” he said, adding: “Even the locals have been asked to accommodate the stranded tourists as much as possible.”

Responding to the calls, many local hotels have offered to extend help and a hotel has announced to provide free meal to the stranded tourists.

Meanwhile, the Khyber Pakhtunkhwa Tourism Department on Saturday announced that Galiyat had been completely closed for next two days due to rains and snowfall.

In a tweet, Khyber Pakhtunkhwa Integrated Tourism Development Project (KITE) appealed to the tourists not to travel to Galiyat for next two days.

The department said Shandur, Lowari tunnel, Narran, Babusar Top were also closed due to snowfall along with Karakoram Highway due to landslides at Pattan, Dassu and Jaglot.