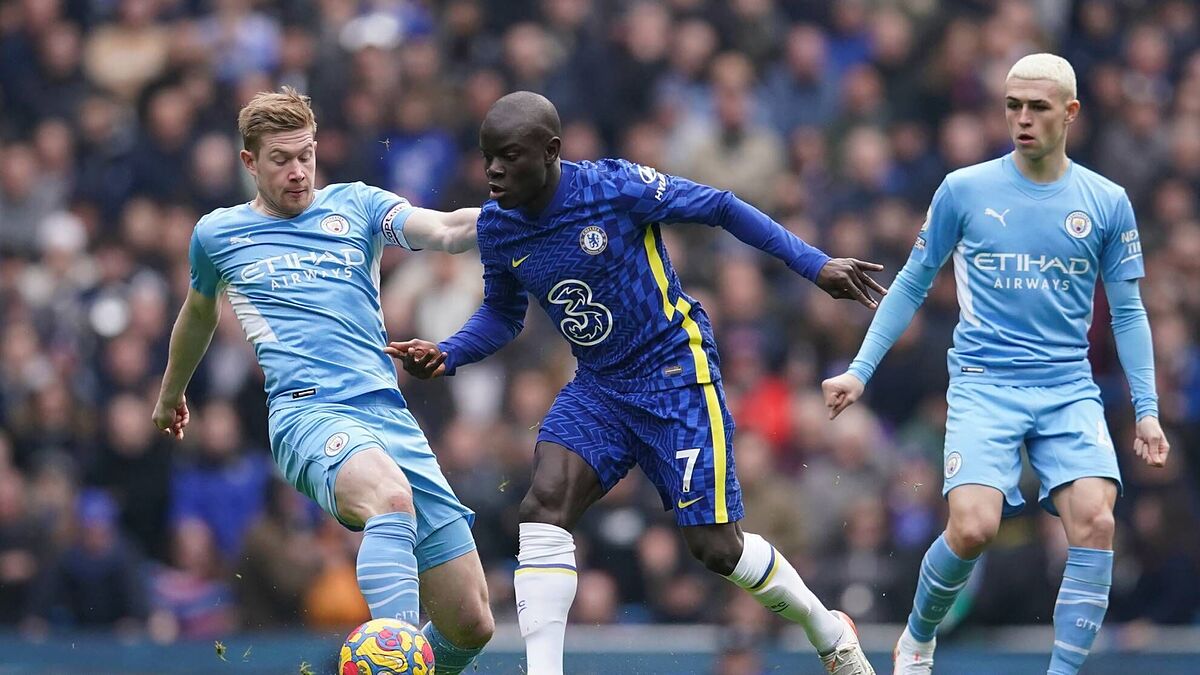 Hello everyone and welcome in to this Manchester City vs Chelsea live blog, as the two Premier League title challengers face off at the Etihad this Saturday lunchtime. Man City currently lead today’s rivals by 10 points in the table, so will be looking for what would be another statement victory. Meanwhile, Thomas Tuchel‘s charges will be out to try to pull themselves back into the mix. It should be fascinating and we’ll have all the details for you right here.

This is the very beginning of this Saturday’s Premier League live blog, where we’ll have all the Manchester City vs Chelsea build-up and then minute-by-minute updates too.

Minute 48: Ederson with his first save

Ederson is suddenly involved up the other end, with Romelu Lukaku through on goal. But, the Manchester City goalkeeper does well and denies the Belgian.

As De Bruyne whips a low ball into the area, Raheem Sterling tumbles to the ground and looks for a penalty. But, nothing is given.

Minute 46: Manchester City pick up where they left off

We’re back for the second half and Manchester City have picked up where they left off, which is inside the Chelsea half. They start this second period with the ball and looking for an opening.

Half time: Chelsea are holding on

Chelsea have managed to hold on and it’s 0-0 at half time. Manchester City have been the better team by far, but they haven’t managed to score and that’s in part because of a brilliant Kepa save on Grealish.

Minute 43: Over from De Bruyne

Manchester City are finishing the half strong and create another shooting opportunity, this time for De Bruyne. But, he blasts over the Chelsea crossbar.

Minute 39: Huge save from Kepa!

Jack Grealish has the best chance of the game and shoots from a central position, but the ball just brushes Kepa‘s outstretched leg and bounces just wide. That looked like it was going in.

Minute 37: Rudiger with the vital intervention

De Bruyne finds some space, probably because he was offside, and he plays a dangerous low ball across the Chelsea box. But, Rudiger is there and able to cut it out.

Manchester City win a few freekicks and corners in a row, but Chelsea‘s defence stands tall and clears the danger each time. It’s still goalless here at the Etihad.

Minute 23: De Bruyne is the latest to test Kepa

Now, Kevin de Bruyne gets a shot off that Kepa catches comfortably. It was a tight angle for De Bruyne, near the byline on the left-hand side. He did well to even get it on target.

Minute 20: Chelsea are getting back well

Manchester City have most of the ball, but Chelsea are getting forward too. However, the visitors are doing a great job of getting back quickly whenever they lose it, denying City the chance to counter.

Kepa has been the busier goalkeeper so far and makes a close-range save now from a John Stones header. It was right at him, but still a good save.

Chelsea break forward with Lukaku, but he decides to pass it to Ziyech. He doesn’t connect, but was also in an offside position. That was a wasted chance.

Minute 6: An early yellow for Alonso

Marcos Alonso picks up an early booking, for fouling Raheem Sterling as the December Player of the Month was about to break free. The freekick comes to nothing, but this is a problem for Alonso.

A ball over the top from Manchester City sees Kepa rush out, but he blasts it into Cesar Azpilicueta, provoking a deflection that could have gone anywhere and hurting his club and international teammate in the process.

Here we go then! This is one of the highlight fixtures of the entire 2021/22 Premier League season and we’ll be bringing you all the details here on this live blog.

It’s almost time for this Manchester City vs Chelsea! The players are in the tunnel of the Etihad, so we’re about to get going here. On this live blog, we’ll bring you all the details.

It’s Craig Pawson who’ll be the man in the middle for this one. He has only had one Chelsea game so far this season, their 2-0 League Cup semi-final first leg win over Tottenham, while he hasn’t had a single Manchester City game yet this campaign.

It’s almost time for this heavyweight clash at the top of the Premier League. Manchester City are currently 10 points ahead of Chelsea, so could end the day seven, 10 or 13 ahead of the side from London. Let’s see how this six-pointer finishes up.

11:40 GMT: The Manchester City line-up is confirmed too

Looking back at the past few meetings between these sides, Manchester City won 1-0 at Stamford Bridge earlier this season when Gabriel Jesus scored the only goal of the game. But, Chelsea won each of the previous three meetings, over a month and a half spell at the end of last season as the Blues won in the Premier League, the FA Cup semi-finals and the Champions League final.

10:40 GMT: Player and coach of the month for Manchester City

Manchester City come into this game with the Player of the Month and the Coach of the Month for December, with Raheem Sterling and Pep Guardiola winning these awards.

It should be a cold January lunchtime at the Etihad for this Manchester City vs Chelsea. The home side have posted a weather update and the temperature should be just three degrees.

09:40 GMT: What are the Manchester City vs Chelsea predicted line-ups?

09:20 GMT: What time does Manchester City vs Chelsea start?

This Saturday lunchtime fixture kicks off at 12:30 GMT, the local time in England where it’ll be broadcast live on BT Sport. For those living in the USA, you can tune in at 07:30 ET / 04:30 PT and watch the game live on Peacock.