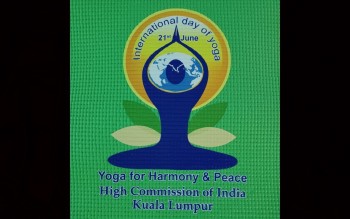 The 8th IDY, with the theme ‘Yoga for Humanity’, is the first physical event ever since the COVID-19 pandemic began in 2020.

Indian High Commissioner to Malaysia, B.N.Reddy, in his speech at the event highlighted the importance of Yoga for physical, emotional and spiritual well-being since yoga deals with the mind, body, soul spectrum.

“In Malaysia, there has been a significant growth and promotion of yoga by several institutions, with the Indian High Commission taking the lead in organising several yoga programmes,” he told reporters after the event which was graced by United Nations Resident Coordinator in Malaysia, Brunei Darussalam and Singapore,  Karima El Korri and attended by several members of diplomatic corps.

Reddy said he was elated to see many yoga enthusiasts engaging in mass yoga demonstration this year, adding that IDY was conducted virtually in 2020 and 2021 following various restrictions due to the COVID-19 pandemic.

Yoga includes stretching and bending of body, besides doing breathing exercises, aimed at transforming body and mind. Proponents of the exercise say, it is a 5,000-year-old physical, mental and spiritual practice which originated in India.

In December 2014, the United Nations declared June 21 as the International Day of Yoga following a proposal by Indian Prime Minister Narendra Modi.

Reddy said the Indian High Commission with the cooperation of 47 local partners will organise a month long yoga activity in 75 locations throughout Malaysia.