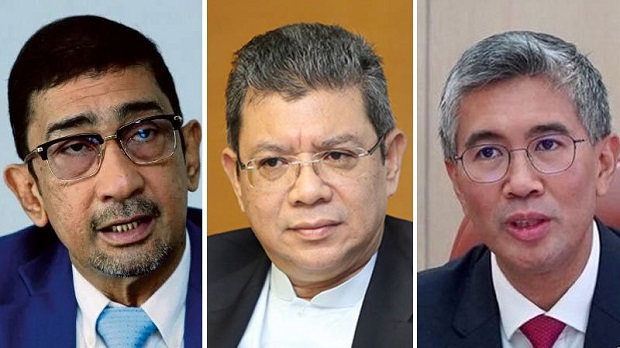 Communications and Multimedia Deputy Minister Zahidi Zainul Abidin has backed calls for the MACC to investigate Digital Nasional Berhad (DNB) and the 5G network the company is supposed to implement.

This is after Umno Youth members filed a report with the MACC and submitted a memorandum to Zahidi at Wisma RTM in Kuala Lumpur today .

Speaking to the press after receiving the memorandum, Zahidi said the 5G rollout is a major issue that could become another 1MDB.

“If the spending is this large but the rakyat can’t see the progress on 5G, of course questions will arise.

“We don’t want another 1MDB, where Umno was accused of all sorts of things,” he said.

DNB is a special purpose vehicle that was tasked with setting up 5G throughout the country.

However, the implementation has faced industry resistance, which the deputy minister acknowledged.

He said today that among the matters the MACC should look into is the bumiputera participation in the project.

“I ask the MACC to investigate the lack of bumiputera participation in this 5G project. Imagine an expenditure of RM30 billion, but without any visible bumiputera agenda,” he said.

He also described DNB’s operating model as monopolistic, and that this should be broken up.

Earlier, Umno Youth exco Fairuz Jamaludin made four demands of DNB. He also sent the memorandum containing the demands to MACC this morning around 9.30am.

KUALA LUMPUR: Umno Youth has lodged a report with the Malaysian Anti-Corruption Commission (MACC), urging the anti-graft agency to probe the rollout of the 5G network by Digital Nasional Berhad (DNB).

It urged Putrajaya to carry out a holistic investigation into DNB to ensure good governance and transparency in the 5G rollout to prevent a big financial scandal.

Umno Youth urged DNB to reveal the actual costs for the 5G network rollout and a detailed explanation on the wholesale rates for telecommunication companies.

“Umno Youth does not want another massive corporate scandal that can tarnish Malaysia’s reputation,” it said in its memorandum.

It also wanted MACC officers to be seconded to DNB to ensure its procurements and expenses were vetted and for the company’s top management to submit asset declarations.

It claimed that Bumiputera firms were being sidelined in the 5G rollout, citing the lack of programmes specifically for such companies.

“DNB needs to submit a detailed Bumiputera entrepreneur plan and programme to ensure Bumiputera firms are involved in the nation’s digital economy ecosystem.

“Without the opportunity to compete in the digital economy, Bumiputera firms will be left far behind in national and international markets.”

After receiving the memorandum, Zahidi also urged the MACC to probe DNB since it involved public funds. The deputy minister also agreed that DNB did not empower the Bumiputeras, citing the lack of locals among its top officials.

He also said he did not want DNB to become an issue like 1MDB, with people blaming Umno for the financial scandal. FMT