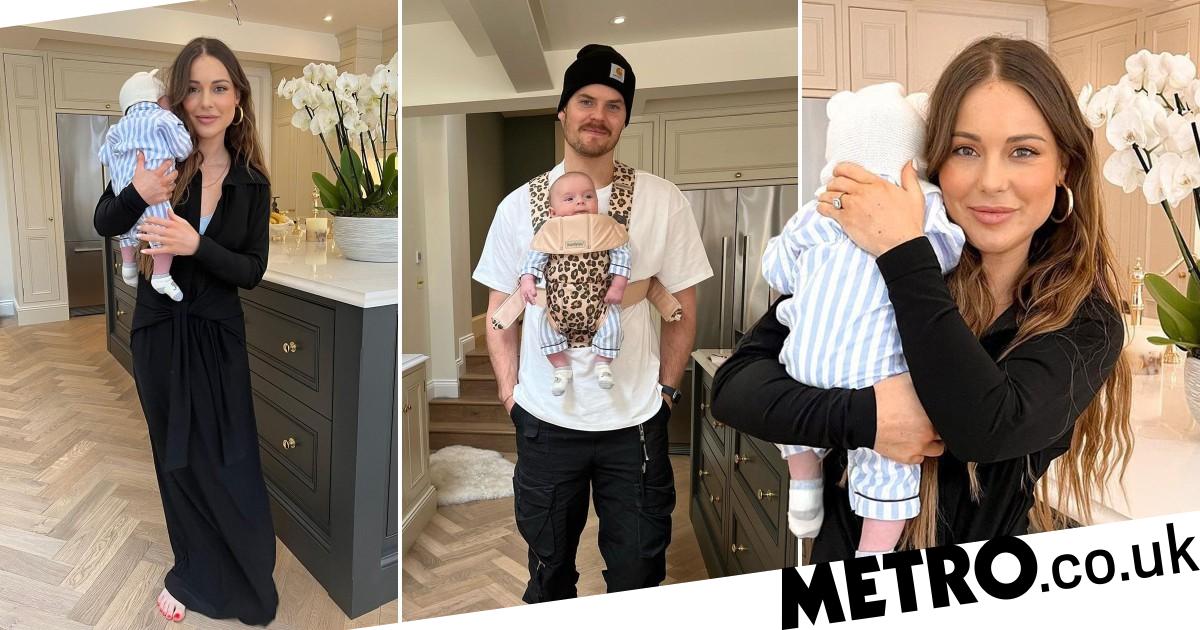 Louise Thompson has marked her son turning seven weeks old after opening up on her traumatic birth experience.

The Made In Chelsea star, 31, shared a series of sweet photos of her and fiancé Ryan Libbey, also 31, cradling their son Leo-Hunter in their kitchen.

Leo could be seen wearing a sweet pair of blue striped pyjamas as she held him, before being transferred to a leopard-print baby carrier strapped to Ryan’s front.

It comes after Louise opened up about suffering ‘various serious complications’ and almost dying while giving birth to her first child.

She kept the arrival of her baby under wraps for several weeks after he was born in November as she recovered in intensive care.

Louise explained at the time: ‘The reason I have been absent for weeks is because I have been very unwell.

‘[Five] weeks ago I gave birth to my beautiful baby boy Leo-Hunter Libbey weighing in at 7lbs. Unfortunately it wasn’t the easiest start for either of us. One ended up in NICU and the other ended up in ICU.

‘Whilst Leo made a fairly quick recovery, I have been recovering in hospital for a month with various serious complications.’

Louise also thanked NHS staff in a later post for ‘saving her life’, adding: ‘I want to thank the room full of people who worked through the night to save my life. Many of them were called in from their family homes at an unearthly hour.’

More: Made in Chelsea

She also paid tribute to Ryan for his support during the ordeal and the ‘hardest year of her life’, which included their home being damaged in a fire in October after a faulty fridge exploded.

While Louise, her mother, Ryan and the family’s dogs were thankfully all able to escape unharmed, they were forced to move from place to place and live out of their car while the home is uninhabitable.