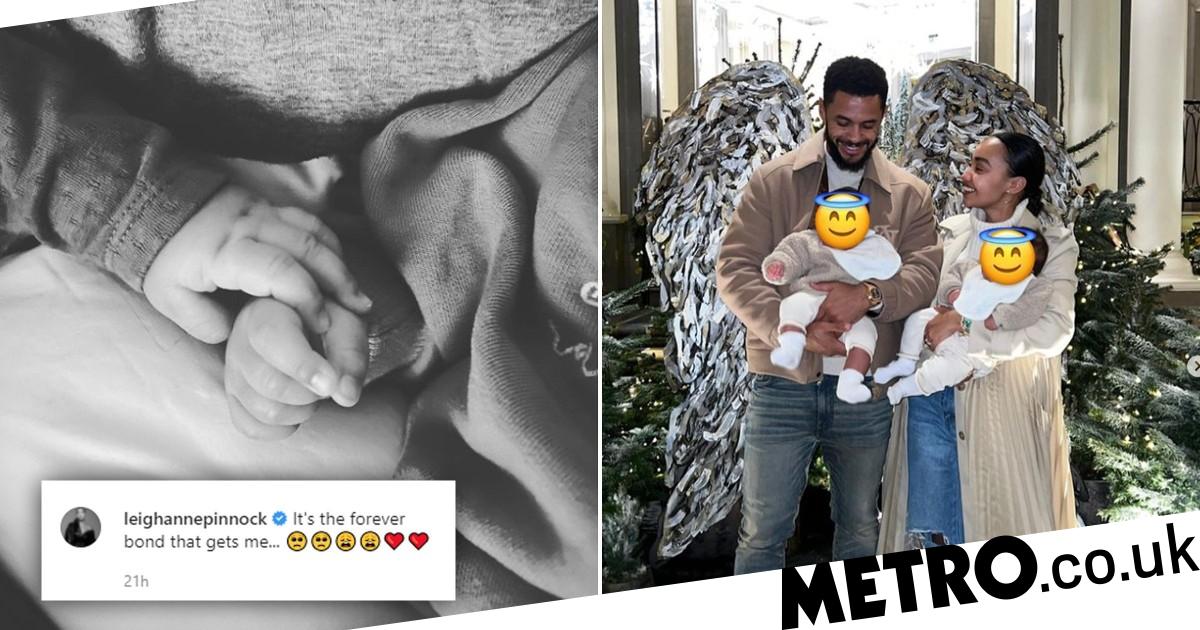 Leigh-Anne Pinnock melted millions of hearts when she shared a new snap of her baby twins.

The Little Mix star, 30, sent fans into a frenzy with the most adorable picture of the tots holding hands.

Leigh-Anne gave birth to twins back in August, and while neither their sex nor names have been made public, the singer is still giving us a glimpse into her baby bubble with the occasional pic.

The Boxing Day movie star posted a black and white snap of her twins’ hands to her 8.1million followers with the caption: ‘It’s the forever bond that gets me… 😩😩❤️❤️’

Fiancé Andrew Gray – with whom Leigh-Anne shares the bubbas – was quick to comment and gush over his little ones, writing: ‘And the chunky hands😍😍😩😩’

Fans’ emotions were beyond control in the comments section, as they flooded her feed with heart eye emojis for the ‘so so cute’ pic.

A fellow new mum to twins added: ‘My twins are a few weeks younger than yours and I’m loving watching how they interact and look for each other. It’s amazing.’

Leigh-Anne and husband-to-be Andre got to enjoy their first Christmas as a family-of-four last month, as the star shared the sweetest photos of the brood in matching festive pyjamas.

The Sweet Melody hitmaker and Queens Park Rangers footballer were ultimate family goals as they cradled their babies in front of the Christmas tree, with beaming smiles on their faces.

Though the twins are Leigh-Anne’s first children, she’s been handling motherhood like a pro, as she recently juggled the premiere for her acting debut with breastfeeding her twins in the hotel.

The X Factor winner opened up about her decision not to share the twins’ names and gender publicly, telling The Telegraph in November: ‘I’m just gonna keep it to myself.’

Getting candid about adjusting to life as a parent, she added: ‘You can’t plan anything. Even when you want to feed them at a certain time, it never goes to plan.’

Leigh-Anne got to enjoy some downtime over the festive period before reuniting with bandmates Perrie Edwards and Jade Thirlwall to start rehearsals for the group’s upcoming arena tour.

Following the shows, the group will embark on a hiatus but have assured fans they are not splitting up.


MORE : Ashley Cain and Safiyya Vorajee say it would be ‘beautiful’ to have another baby after tragic death of daughter Azaylia