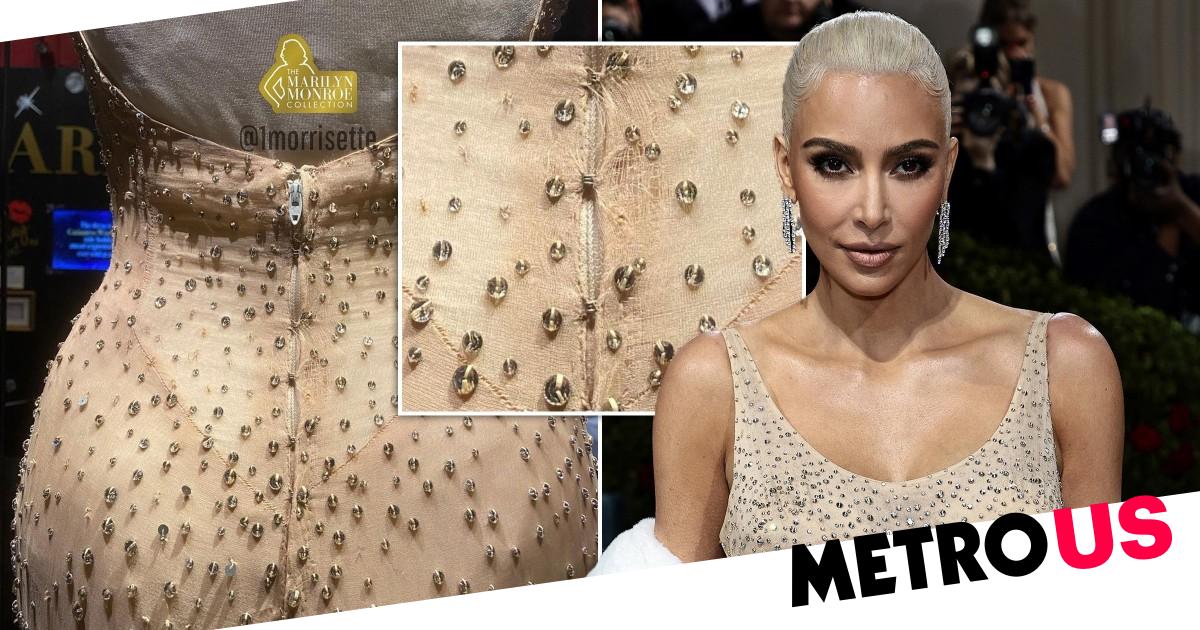 Kim Kardashian has insisted that the Marilyn Monroe dress she wore to the Met Gala is still intact.

However, reports have since claimed that the dress was returned to Ripley’s Believe It Or Not! showing signs of disrepair.

Photos have emerged on social media sites like TikTok appearing to show some of the rhinestones missing and ripped material.

Addressing the furore during an interview with the star, Today show host Hoda Kotb said: ‘We keep seeing stuff like, “The dress is ruined” … All of that is not true?’

Kim, 41, then replied: ‘No. Ripley’s [and I] worked together so well; there were handlers in gloves that put it on me.

‘It was such a process…I showed up to the red carpet in a robe and slippers, and I put the dress on on the bottom of the carpet, went up the stairs … I probably had it on for three minutes, four minutes.’

Kim added: ‘I respect [Monroe], I understand how much this dress means to American history.

‘And with the theme [of the Met Gala] being American, I thought, “What’s more American than Marilyn Monroe singing happy to the President of the United States?’

In their defence of the star, a spokesperson for Ripley’s said last week: ‘Kim Kardashian’s walk up the Metropolitan Museum’s stairs at this year’s Met Gala caused quite the stir, but one thing Ripley’s Believe It or Not! can say with confidence is that it did not cause damage to Marilyn Monroe’s famed “Happy Birthday” dress from 1962.

‘Kim Kardashian wearing the “Happy Birthday” dress has been hotly contested, but the fact remains that she did not, in any way, damage the garment in the short amount of time it was worn at the Met Gala.’

Ripley’s VP of Publishing and Licensing, Amanda Joiner, continued: ‘From the bottom of the Met steps, where Kim got into the dress, to the top where it was returned, the dress was in the same condition it started in.’


MORE : Binky Felstead reveals beloved dog was hit by a van and ‘left for dead’: ‘We were in pieces’