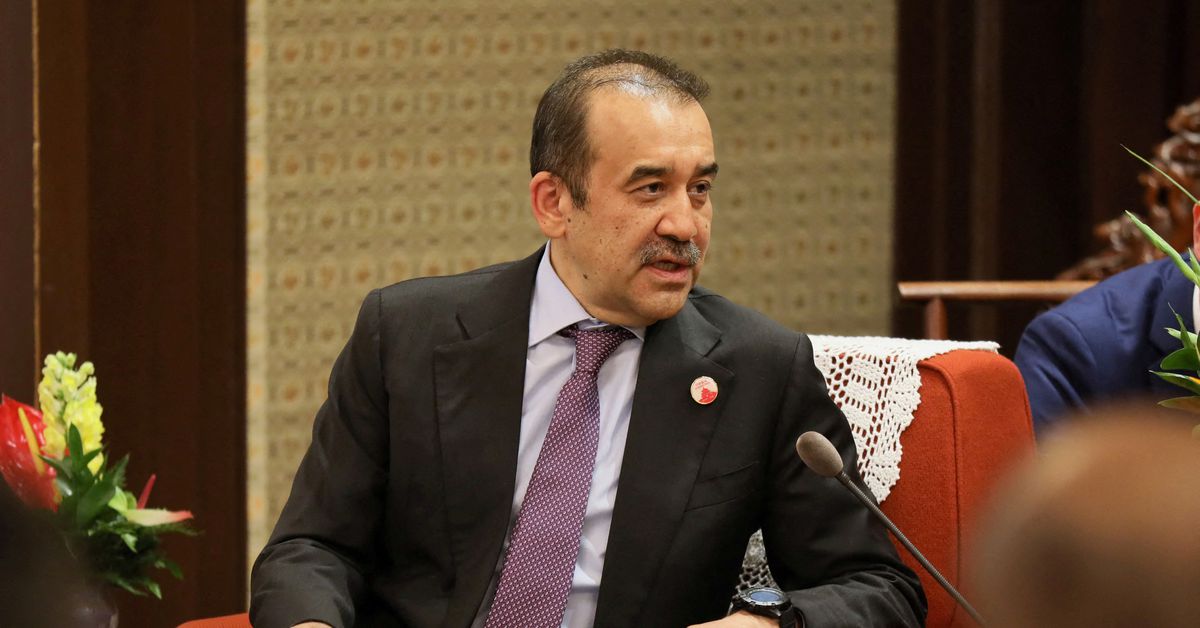 ALMATY, Jan 8 (Reuters) – Kazakhstan’s former intelligence chief has been arrested on suspicion of treason, the state security agency said on Saturday, as the former Soviet republic cracks down on a wave of unrest and starts to assign blame.

The detention of Karim Massimov was announced by the National Security Committee which he himself headed until he was fired by President Kassym-Jomart Tokayev on Wednesday as violent protests swept across the Central Asian nation.

Tokayev’s office said he had told Russian President Vladimir Putin in a phone call that the situation was stabilising.

“At the same time, hotbeds of terrorist attacks persist. Therefore, the fight against terrorism will continue with full determination,” it quoted him as saying.

The Kremlin said Putin backed Tokayev’s idea to convene a video call of leaders from the Collective Security Treaty Organisation (CSTO), under whose umbrella Russia and four other former Soviet republics have sent troops into Kazakhstan to help restore order. It was not clear when this would take place.

Dozens of people have died, thousands have been detained and public buildings across Kazakhstan have been torched over the past week in the worst violence experienced in the major oil and uranium producer since it became independent in the early 1990s as the Soviet Union collapsed.

Tokayev has ordered his troops to shoot to kill to put an end to what he has called attacks by bandits and terrorists.

He said on Friday the state had “slept through” instigators’ preparations to launch attacks on the biggest city, Almaty, and across the country. The arrest of Massimov indicated that moves against those deemed responsible are under way.

Apart from heading the intelligence agency that replaced the Soviet-era KGB, Massimov is a two-time ex-prime minister who worked closely with former President Nursultan Nazarbayev, the country’s ruler for three decades until he turned over the presidency to Tokayev in 2019.

The demonstrations across the country began as a response to a fuel price hike but swelled into a broad movement against Tokayev’s Russian-backed government and 81-year-old Nazarbayev, whose family is widely believed to have retained influence in Nur-Sultan, the capital that bears his name.

After several days of violence, security forces appeared to have reclaimed control of the streets of Kazakhstan’s main city Almaty on Friday.

Some businesses and petrol stations began to reopen on Saturday in the city of around 2 million people as security forces patrolled the streets. Occasional gunshots could still be heard around the city’s main square.

The deputy mayor of the city was quoted by Russia’s RIA news agency as saying operations to purge the city of “terrorists and bandit groups” were still under way and citizens were advised to stay at home.

In Nur-Sultan, Reuters filmed police stopping drivers at a checkpoint with a heavy presence of armed soldiers nearby.

The interior ministry said that more than 4,400 people had been detained since the start of the unrest. Tokayev announced that a national day of mourning would take place on Monday to commemorate those killed in the unrest.

Access to the internet, which was been largely shut down across the country for days, was still heavily disrupted on Saturday.

The deployment of the Russia-led CSTO military alliance in Kazakhstan at Tokayev’s invitation comes at a time of high tension in East-West relations as Russia and the United States gear up for talks next week on the Ukraine crisis.

Moscow has deployed large numbers of troops near its border with Ukraine though it denies U.S. suggestions that it is planning to invade the country, saying it wants guarantees that NATO will halt its eastward expansion.

Washington has challenged the justification for sending Russian troops to Kazakhstan and questioned whether what has been billed as a mission of days of weeks could turn into a much longer presence.

“One lesson of recent history is that once Russians are in your house, it’s sometimes very difficult to get them to leave,” Secretary of State Antony Blinken said on Friday.

Reporting by Olzhas Auyezov and Mariya Gordeyeva in Almaty and Tamara Vaal in Nur-Sultan; Additional reporting by Gabrielle Tétrault-Farber in Moscow; Writing by Mark Trevelyan; Editing by Pravin Char