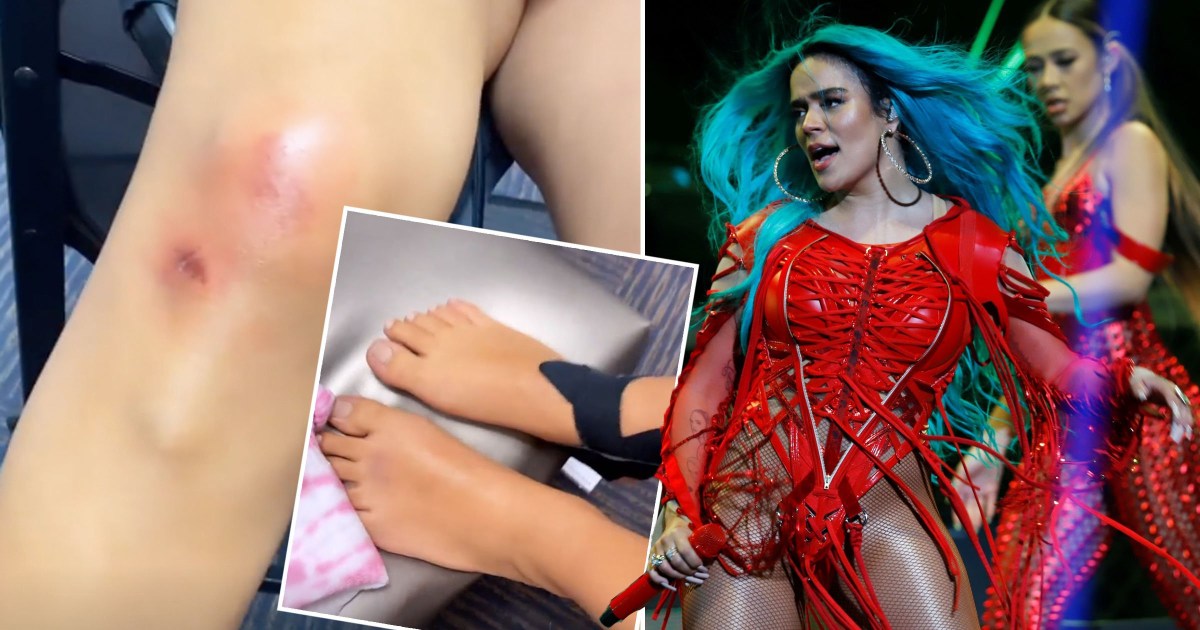 Karol G needs well-deserved rest and recuperation judging by the cuts and bruises she suffered after taking a massive fall on stage.

The Colombian reggaeton singer performed a sold-out show at the FTX Arena in Florida City on Saturday night when the unfortunate incident happened.

Surrounded by her dancers, Karol G stood at the top of a flight of steps and lost her footing causing her to tumble all the way to the bottom.

However, she incredibly wasn’t down for long and jumped right back up like a true pro, literally shook it off and carried on with the performance.

She did address the incident and told her audience in Spanish: ‘All my nails broke, I think my knee broke. Everything hurts.

‘After having filled this arena for the first time in my life… I wanted it to be perfect.’

Once backstage, Karol G’s stylist filmed the singer’s injuries which included large bruises on her arms and legs as well as a huge cut on her knee, while one foot was bandaged up. The clips were uploaded to the singer’s Instagram account where she boasts 44million followers.

The 30-year-old singer, real name Carolina Giraldo Navarro, shot to fame appearing in the Colombian spin-off of The X Factor when she was a teen. From there she was signed to Universal Music Latino and collaborated with Bad Bunny on the single Ahora Me Llama, which became her breakout hit.

In 2019, two years after the release of her debut album, Karol G saw the music video for her single China featuring J Balvin, Daddy Yankee and Ozuna reach one billion views.

That same year, she released the single Tusa with Nicki Minaj propelling her to global fame and earning her a staggering 25 weeks at number one on the Billboard Hot Latin songs for 25 weeks.

Karol G released her most recent album, KG0516, in March and landed at number one on the US Latin chart.

MORE : Stacey Solomon says baby Rose will be her last child: ‘I don’t want to push it any more’