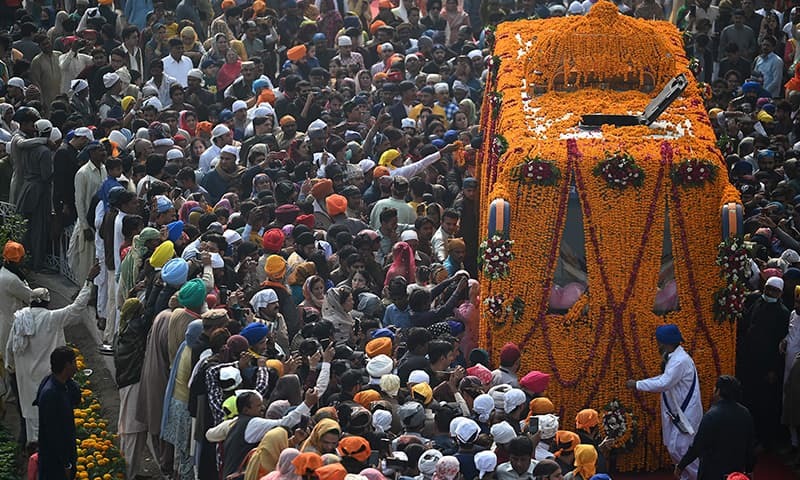 “I never thought we would get this sort of love from our Pakistani brothers,” says a 70-year-old farmer from India.

The scent of flowers and perfume hung in the air as thousands of Sikhs from India were welcomed to Pakistan on Friday for one of the world’s biggest birthday celebrations: the 552nd birth anniversary of the Guru Nanak.

The festivities were taking place at the shrine to the founder of the Sikh religion in Nankana Sahib, the city where he was born in 1469.

The emotion is heightened this year, as devotees from India were unable to cross the border in 2020, due to coronavirus restrictions.

“I have goosebumps, I can’t explain how I’m feeling,” Darshan Singh, a 70-year-old farmer from India, told AFP.

“I never thought we would get this sort of love from our Pakistani brothers,” he said. “These women are not Sikh, these children know nothing about our faith, but they are standing up to welcome us with open arms and clean hearts.”

Many others were similarly swept up in the rare sense of cross-border unity between Pakistanis and Indians.

Annie Munjal, a 24-year-old from Delhi, said her grandparents often told her stories of growing up in Lahore before Partition.

“We had heard from them how Pakistan was, but we never got to see,” she said. “Now we are here … they are just like us.”

The celebration of more than 12,000 people at the gurdwara is infectious.

Curious Muslim residents of the city stand on their rooftops to watch, and shower the Sikh processions with rose petals and chocolates. At the main gates, young Muslims and Hindus join Sikhs in dancing to the beat of the dhol.

Posters welcoming the pilgrims alternate with heavy security on the streets leading to the shrine.
The devotees, many of them barefoot, wave saffron flags as they sing hymns and recite poetry and religious texts — all before a massive lunch of rice, naan, chickpeas and sweets.

‘Long wait is over’

The first of ten gurus who developed the Sikh faith, Guru Nanak’s teachings laid the basis for a community that now numbers up to 30 million across the world. But most of the faithful are now in India, where their families fled the violence that claimed millions of lives during Partition.

It was only in 2019 that Pakistan opened the visa-free Kartapur Corridor, allowing Sikhs from India to visit Kartarpur, where another shrine built to mark the guru’s death lies.

That white-domed gurdwara was so close to the border that for decades devotees in India could see it, but not visit.

The Covid-19 pandemic prevented Indians from crossing in 2020. This year authorities agreed to reopen the corridor, and the faithful began streaming across in preparation for the birthday celebrations this week.

Some stayed in Kartarpur, while many made their way 180 kilometres (110 miles) southwest to join those celebrating in Nankana Sahib.

“My years-long wait is finally over. I am steps away from my guru’s home,” Buljit Kaur, a 61-year-old pilgrim from India, told AFP in Nankana Sahib.

Pervaiz Ahmed, a local doctor, was coming out of a mosque on the same street as the gurdwara.
“Sikhs find their roots here, this is the place they belong to. We have no objections seeing them coming in such big numbers,” he said.

The Indian farmer, Darshan Singh, said he would return with his family.

“This is the first time I came to Gurdwara Nankana Sahib, and it looks like I have wasted 70 years of my life,” he said. “The emotions and feelings cannot be explained.”