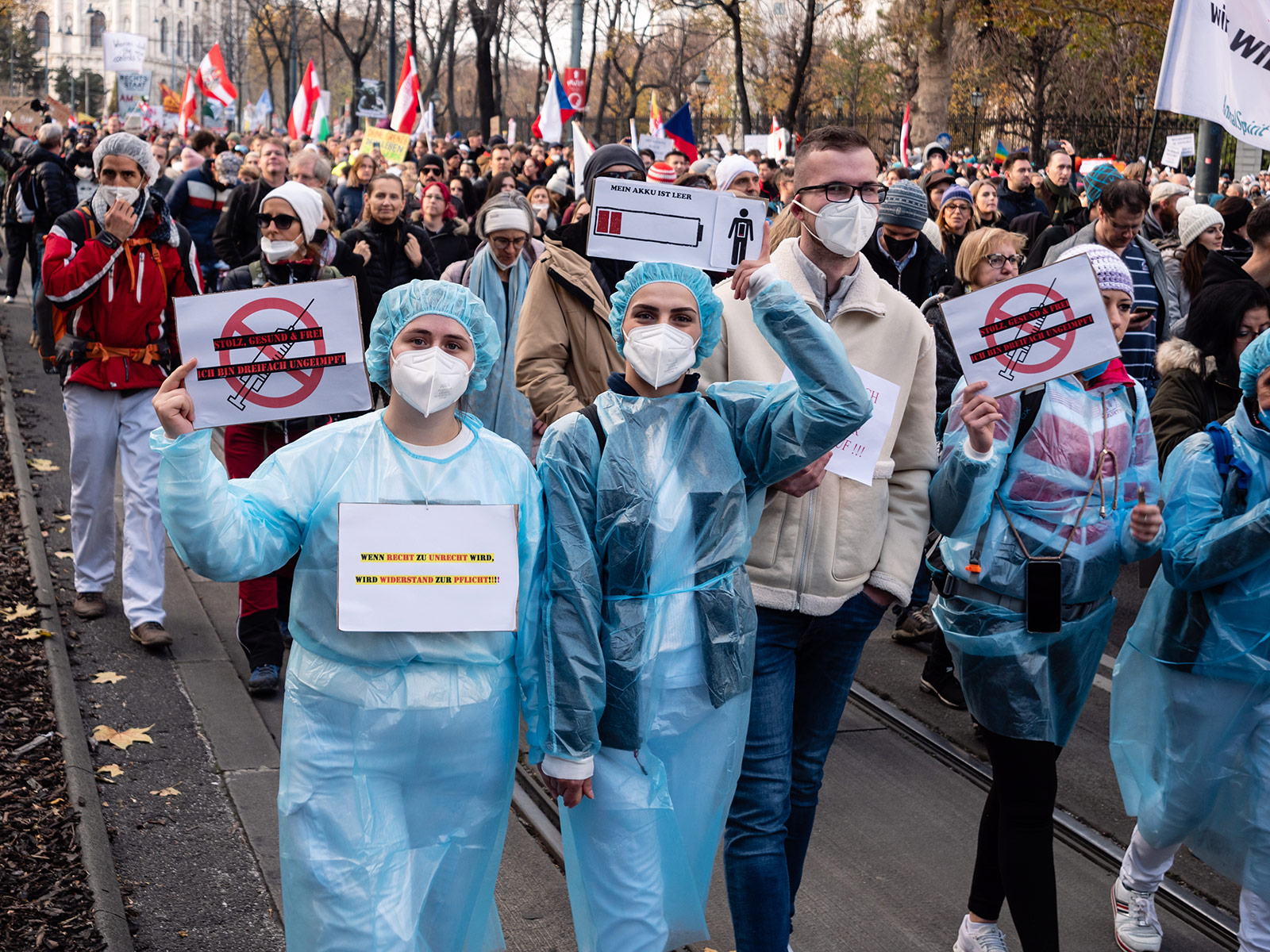 At first, I was curious when I saw an article on Fair Observer by Ahmed Khalifa titled, “Austria’s COVID-19 Measures Have Gone Too Far.” After all, Austria is the country I currently live in, and my initial reaction to the announcement of another nationwide lockdown caused something of an uproar in myself.

Yet, unlike the author’s view, I was frustrated that it has gone this far and that we now need to use tough measures — which include mandatory vaccinations by February 2022 — to avoid a collapse of the health care system. The more I thought about the points raised in the article, the more I felt the urge to respond. I appreciate the policy of Fair Observer to publish those with differing opinions and I want to contribute to the discussion.

First, you can and should criticize the Austrian government for how it has handled the COVID-19 crisis. In particular, its communication was flawed by prematurely lifting COVID-19 restrictions in July and promising there would be a “return to normal” by the summer. Criticism of the government is clearly allowed in Austria, otherwise protests against lockdowns and vaccines wouldn’t be taking place.

Yet what baffles me is that for some, there seems to be a complete ignorance over the reasons that many people participate in such demonstrations. This becomes dangerous if one is oblivious to messages used by populist and far-right groups — many of which organize and attend such protests — without questioning them.

For instance, the chant “Wir sind das Volk” (We are the people) can often be heard during protests today against lockdowns and vaccines. It was also used during demonstrations that led to German reunification in 1990 and was directed at the authoritarian German Democratic Republic (GDR), otherwise known as East Germany. The measures introduced to prevent the spread of COVID-19 are nowhere comparable to the GDR. But when populist politicians like the leader of the Freedom Party of Austria (FPO), Herbert Kickl, state in press releases that from “today, Austria is a dictatorship,” it distracts people from the reasons for COVID restrictions and mocks victims of real dictatorships.

I am lucky to have never lived in an authoritarian state, but I do work with people who do and/or have. Therefore, I do not have apt words to respond to claims of “medical apartheid” to describe what is happening today with restrictions being dependent on one’s vaccination status. For example, unvaccinated people were first banned from visiting hospitality venues, hairdressers and cinemas, followed by a lockdown that was specifically for those who had not received a vaccine. It is also true that students and lecturers in Austria must be fully vaccinated in order to attend lectures, but this mainly applies to medical universities where first semesters involve working in hospitals; other universities were permitted to set their own rules. Requiring a negative PCR test would probably work best to help curb the spread of COVID-19 as breakthrough infections can occur among those vaccinated.

Here, the official communication should have been better. The mistake by the government was that being fully vaccinated implied that wearing a face covering and being regularly tested were no longer necessary. Scientific findings during a pandemic are fluid and new research might make adapting to the situation necessary. This should have been better relayed to the Austrian public not by researchers, but by politicians and journalists.

This situation contributed to the necessity of announcing another lockdown, which, in addition to vaccine mandates, led to the demonstrations in Austria last weekend. As is always the case, estimates vary to a great extent between official figures from the police (40,000 protesters in the capital Vienna) and the organizers (one of them being the far-right FPO, which said 100,000 attended).

Regardless of which source is more credible, let’s put this into perspective. On the same day, more than 87,100 people were vaccinated in Austria with either their first, second or third doses. In Vienna alone, over 32,300 received a jab, which was the third consecutive day with the highest number of vaccinations in the capital. In other words, nearly the same amount of people who showed their discontent with the vaccination mandate and lockdown actually received their jab. And the overwhelming majority clearly believe in the efficacy of the vaccines — more than two-thirds of Austrians are fully vaccinated.

Second, it is necessary to have a closer look at who has been organizing these protests, which have occurred throughout the year. (German-speaking readers can watch this documentary.) The Atlantic summed this up in an article on protests in Germany, which has similarities to Austria. In both countries, participants have included conspiracy theorists and members of both the far left and far right. For the record, not everyone who has attended such demonstrations falls into one of these categories. Khalifa points this out by saying he saw “people from all walks of life” at the protest in Vienna on November 20. However, one should be aware with whom they are assembling and the messaging of the main organizers.

At protests in Germany and in Austria, an underlying issue is anti-Semitism. The crude comparison with the Holocaust by some protesters wearing a yellow Star of David with “unvaccinated” written instead of “Jew” leaves me again at a loss for words. There is a certain irony when people are protesting with signs that read “My Body, My Choice” next to groups that would deny a person this choice when it comes to abortion.

Shifts in the discourse and cries about a so-called dictatorship desensitize others when it comes to actual alarming developments. The aim is to create a sense of duty to participate in order to prevent greater harm. But why then has it been framed as “patriotic,” as Khalifa puts it, instead of a civic duty to act?

Ultimately, opposition to COVID measures plays into the hands of populists, who benefit and are driving this forward for their own political agenda. Criticizing the national public service broadcaster, ORF, is another one of these methods and has been used by the FPO for a long time.

Kickl has also praised the anti-parasitic drug ivermectin, amongst others, as a “Plan B” for the pandemic. One of his fellow party members even waved a leaflet of the drug in parliament. While there seems to be an indication for possibly using the drug to treat some cases of COVID-19, the European Medicines Agency has warned that the dosage to be effective is dangerous. Supplies of ivermectin are now low due to high demand in Austria, directly impacting the treatment of conditions the drug is traditionally used for. It has also led to at least one person ending up in the hospital.

Third, mandatory vaccinations would actually help to alleviate the situation in Austria, not only with the pandemic, but also with regard to divisions in society. If everybody is vaccinated, everybody has the same rights and obligations. In an interview with the BBC, Austrian Chancellor Alexander Schallenberg focused on the latter, stating that you “don’t only have rights, you have obligations.”

It would also help to get out of the loop of lockdowns, which are extremely expensive for any economy. Estimates for the latest lockdown are as high as €4 billion ($4.48 billion). This will ultimately lead to tax hikes in the next national budget and have an impact on future investments. Less pressure on hospitals would also lead to fewer burned-out staff members, who are quitting in desperation. But the most important point: Fewer people will die or suffer from long-term implications, which, due to the relatively short experience we have with COVID-19, still might be unknown.

It is worth pointing out that vaccines were mandatory in post-war Austria and elsewhere, namely in order to eradicate smallpox. But it remains to be seen how the legal basis for this will look like today with legal challenges likely to take place. That is the beauty of living in a democratic country based on the rule of law.

In a democracy, that also includes the right to protest. But one should be cautious with whom they are protesting and find more suitable ways of voicing different opinions instead of assembling with a large group of people during a pandemic. Protesters are figuratively spitting into the face of health care professionals, something that has literally been done by some participants at demonstrations in Austria. Virtual town hall debates, signing petitions or engaging with your political representatives would be alternative possibilities.

What should be more sacred than personal health is the well-being of society. History is the progress of the consciousness of freedom, and individual freedom ends when it endangers the freedom of others.