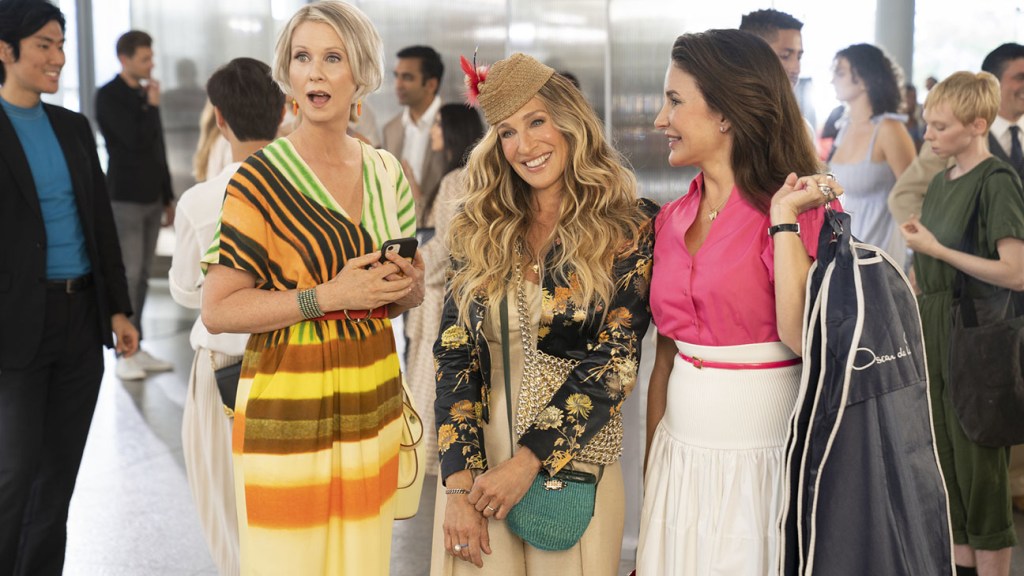 I want to be clear that HBO Max’s ten-episode And Just Like That… is not a Sex and the City reboot. It’s also neither a revival nor a reimagining. Sure, the new show shares DNA with the polemic and revolutionary HBO comedy that aired from 1998 to 2004 and spurred an entire generation’s obsession with Cosmos, designer shoes and Manhattan brunches, but And Just Like That… doesn’t even attempt to resurrect Millennium nostalgia. Its developers, including original showrunner Michael Patrick King and its three main stars, know the world is not the same. They don’t want it to be the same. The two shows are built around (most) of the same characters, but the flounce and fizziness of the original series are largely absent from this moodier and more self-serious one.

When the sequel series was originally announced, I found the title change a little more than eye-rollingly bumptious, but now I understand it. These are two completely separate shows that just happen to share a continued narrative. One was a sexy romantic comedy. This new one is a meditative grief drama. Even Douglas Cuomo’s infamously plinky cocktail lounge-evoking musical theme has been excised.


Sex and the City was funny, fluttery and occasionally — okay, often — pretty stupid. I adored it. The series debuted when I was in fourth grade and I have fond memories of staying up past my bedtime to surreptitiously watch it on Sunday nights, my fingers trained to recognize the feel of the TV remote’s mute button in case my mother’s footsteps tread near my bedroom door. (Early on I knew I was a Charlotte who desperately wanted to be a Miranda.)

In the span of one year, from age 9 to 10, I learned everything a tween could possibly learn about sex from both this show and the film American Pie, which, paired together, cover all the bases of toxic masculinity and toxic femininity. Although the final seasons and subsequent feature films saw the show became a cartoonish parody of itself, Sex and the City still inspired generations of Millennials, mostly young women, to pursue their New York City dreams — though I suspect many of us lived something closer to a bleak post-Recession Girls-adjacent nightmare than an effervescent third wave girlboss fashionista fantasy. Plus, in hindsight, the quad at the heart of SATC was kinda prudish. Even Samantha!

Even as I’ve grown older and rewatched this series with a more mature and critical eye, acknowledging its cringe-worthy mishandling of everything from exoticized queerness to abusive relationships to interracial dating, I can also reason that, like all things, it was — forgive me — a product of its time. The And Just Like That… producers see these issues, too, and in an effort to rectify the wrongdoings of the past, appear to overcorrect to the point of preachy school marm-ification.

But just because SATC was fun and AJLT is somber doesn’t mean the tempo shift is a mistake. Spending time with Carrie Bradshaw (Sarah Jessica Parker), Miranda Hobbes (Cynthia Nixon) and Charlotte York-Goldenblatt (Kristin Davis) still feels akin to covering myself in a warm, time-worn blanket (even if I acutely miss the funky spunk brought by Kim Cattrall, whose #slutgoals Samantha Jones was the beating clitoris of the original series). I embrace the brooding and pensiveness of a series about three women in their mid-50s pinpointing the ways in which their lives have agonizingly changed or agonizingly remained static as they’ve aged. If Carrie’s bouncy blonde curls exemplified the explorative spirit of SATC, then let formerly titian-haired Miranda’s limp silver bob tell you everything you need to know about saturnine AJLT. Nothing gold can stay. And that’s okay.

And Just Like That… is anchored by a major death that asks each of the remaining trio where they actually want to be at this juncture in their lives. (“The sixth stage of grief is stalking,” Carrie deadpans.) The former newspaper sex columnist is now a social media maven and professional podcaster. Attorney Miranda is going back to school to become a human rights advocate, covertly flirting with alcohol dependency and scrutinizing her feelings about a dead bedroom. Onetime art expert Charlotte is examining the last decade-and-a-half of leaning into mommyhood.

They’re no longer motivated by sex or “finding the one”. They want social acceptance, self-acceptance. A sense of personal identity. The best moments of the four forty-minute episodes made available to critics find the women confronting their musty friendship dynamics and the question of intent versus impact. Instead of debating how to handle bodily fluids in their sexual encounters, as they might have done 20 years ago, Miranda is instead complaining within the first 3 minutes of the pilot about stepping on her son’s sticky used condom. (Yes, baby Brady is now seventeen and getting more action than his mother.)

Parker is as charming as ever and it feels as though no time has passed since we last saw Carrie onscreen 11 years ago. Watching her flit between comic exasperation and sinking heartache is a pleasure to behold. Nixon is relatably anxious, the actress ever adept at playing an archetypical fool. Davis, too, is warm, though she takes her time easing back into the role.

SATC is practically the urtext of white feminist narratives, and even in the early 2000s, it wasn’t impervious to complaints about its lack of racial diversity and tone-deaf treatment of race. AJLT tackles these issues head-on, hiring Karen Pittman to play Dr. Nya Wallace, a Black professor that Miranda awkwardly befriends while inadvertently othering based on her race, and Nicole Ari Parker to play Lisa Todd Wexley, a Black socialite whom Charlotte befriends while inadvertently othering based on her race. Both actresses are welcome additions, but the writing and editing renders their introductions rather disjointed.

Throughout the episodes there are references to Ibram X. Kendi’s book How to be Anti-Racist and an entire standup monologue about queer pride that feels more like a stodgy “teachable moment” than a sequence of entertainment. The writers are well-meaning in their intention to shed light on intersectional issues while also showcasing via dialogue that sometimes being well-meaning isn’t enough and even potentially harmful.