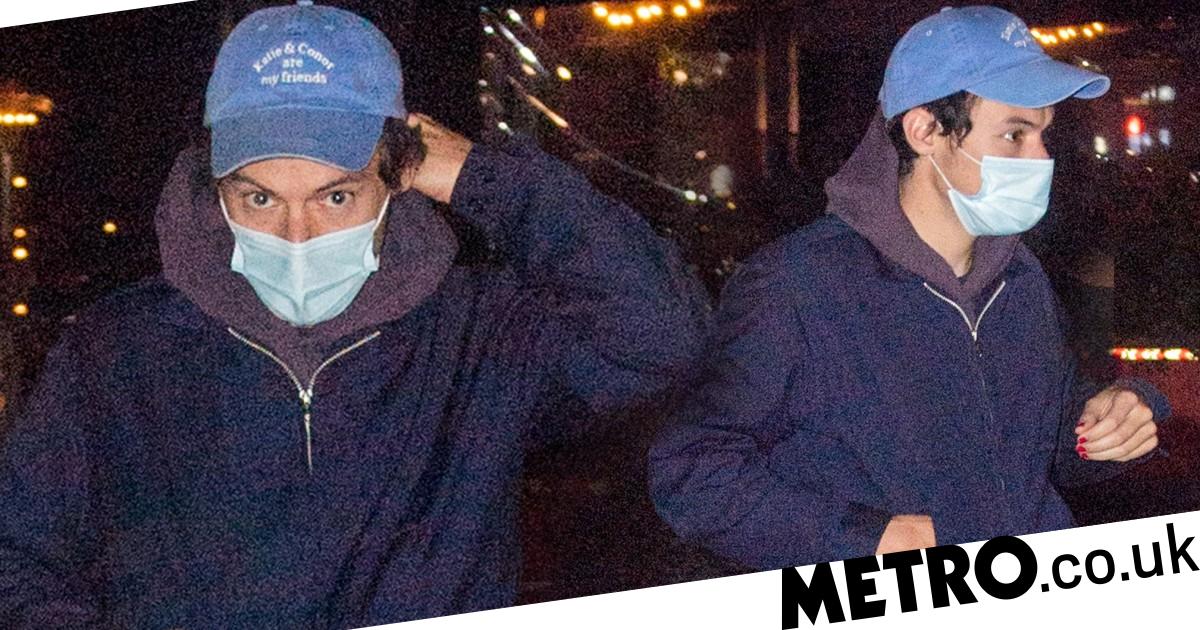 Fresh from winning Halloween, Harry Styles was spotted heading back to his hotel in New York after dining with friends in Tribeca.

The star enjoyed an al fresco meal at Locanda Verde before being seen on foot in the capital city’s streets.

Dressed in ripped pale jeans, checked blue and white lace-up Vans and a navy bomber jacket over a mauve hoodie, the 27-year-old cut a much more casual figure than in recent days.

He was able to also go (almost) incognito with use of a baby blue baseball cap and blue disposable face mask.

However, one trace of his fabulous Halloween costume from Saturday night’s ‘Harryween’ concert remained, with his bright red nail varnish glimpsed as the Watermelon Sugar singer went to put a hand in his jacket pocket.

The former One Direction member had thrilled fans at Saturday’s show with his whimsical outfit, which was a homage to Dorothy from the classic 1939 MGM musical The Wizard of Oz.

Harry, who is known for his bold fashion looks, donned a strawberry-patterned baby doll style gingham blue dress – complete with a matching bow – for his gig, as well as white bloomers and a generous application of blusher to his cheeks.

He finished off the look with red tights and Dorothy’s iconic sparkly red slippers, as he belted out the film’s legendary tune, Somewhere Over The Rainbow, which was made famous by the musical’s lead actress, 17-year-old star Judy Garland.

The performer, who made his acting debut in Christopher Nolan’s 2017 war epic Dunkirk, has also been sending the Marvel rumour mill into overdrive, with reports suggesting he has joined the Marvel Cinematic Universe as Thanos’s carefree brother Eros.

News of his new role was revealed at the premiere for The Eternals, with a Variety reporter confirming: ‘Big reveal from #TheEternals premiere — Harry Styles has joined the MCU as Eros, brother of Thanos.’

It’s reported he appeared in an end-credits scene.

Harry will also be seen acting in his girlfriend Olivia Wilde’s upcoming 1950s film Don’t Worry Darling, opposite Florence Pugh, and in My Policeman, where he’ll play a gay police officer who’s having a secret relationship with a man while married to his wife, also set in the same era.


MORE : The Weeknd wins Halloween as he channels Marlon Brando in unbelievable Godfather Halloween costume: ‘The don is coming’

MORE : Tom Felton ditches Draco Malfoy to dress as Harry Potter for Halloween and his father will be hearing about this