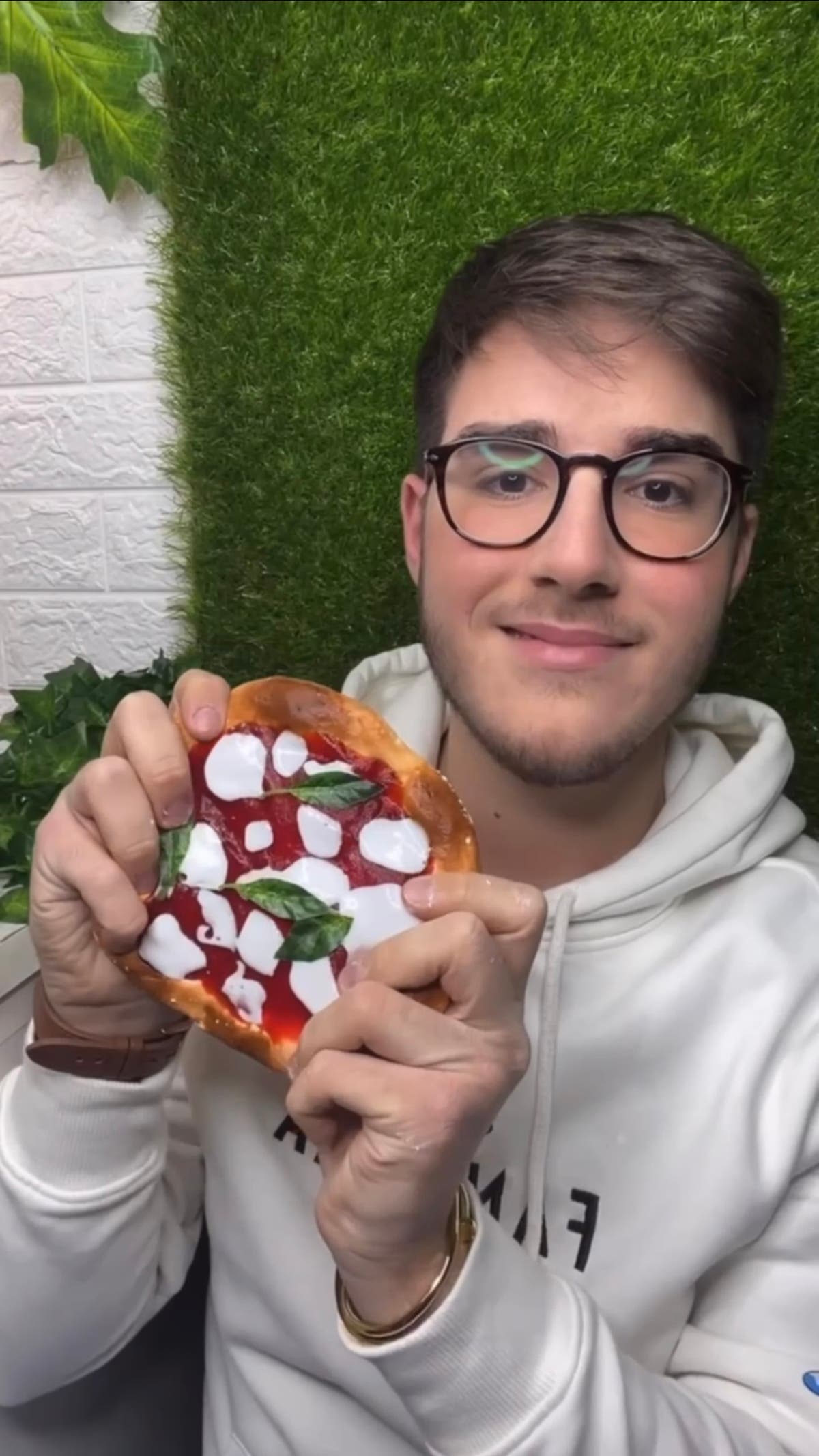 A chemistry student has become a TikTok sensation with nearly 4.5 million followers and one billion views after creating amazing illusionist food sculptures from homemade modelling putty.

Since joining the website in 2020, Giovanni Telese, 19, has seen his profile explode and is now spending £400 a month on supplies to make his ‘clay’.

Mr Telese earned £4,000 last year from “having fun and making videos,” which show him flaunting ‘food’ and smashing it up.

Devoting up to 35 hours a week to making ultra-realistic food models, ranging from burgers to cakes, using the gloopy putty he calls “slime” – which he creates from glue and bicarbonate of soda – his TikTok is in the top 10 most followed accounts in Italy, where he lives.

Mr Telese, of Salerno, said: “Getting TikTok was a life-changing moment. It’s been so crazy.

“I’m just a guy who loves to mix science with art and cuisine and I never expected everything to blow up in the way that it has.

“I don’t know why my food slimes have been so loved. Maybe it’s because they’re so much fun and it’s amazing to watch something that looks like food being destroyed.”

He added: “For me, seeing all the reactions every single day makes it worth it.

“My friends say my food slimes are so realistic that they now have trust issues over whether food is real or not!”

Splitting his time between studying chemistry and making videos, which he started posting in May 2020 under the account @gtcreationslime and releases every day, he has fans worldwide, with people as far away as South Korea, Tahiti and Indonesia watching them.

He said: “I started posting constantly from May 2020 and there was a super boom from the second week.

“I made a video that made me known in Italy, as there was an Italian voiceover, and that’s where it started to take off.

“When I started using songs, too, the foreign world started to find my videos, with people in Tahiti and Indonesia watching them.

“I still cannot believe people from all over the world are watching my work!”

Mr Telese makes his amazing food models by creating each part by hand or with a mould, before painting or dying them with food colouring.

He chose to use homemade slime, as it became a craze in 2018, when it was popularised on YouTube as an easy and cheap way for children to create toys.

Now he combines his passion for art and science to rustle up his creations, often drawing inspiration from TV shows like MasterChef and Bake Off, where he finds dishes to replicate.

He said: “What inspired me to look into food was TV shows about cooking and the concept of unifying science and art in my work really excited me.

“The final plate and what you eat – be it a salad, pasta, or a cake – needs to look good as even the eyes want their portion!”

While his parents had hoped Mr Telese would devote most of his time to fulfilling a career in chemistry, they have realised that his passion for making slime creations has drawn a huge audience and now wholeheartedly support him.

He said: “My parents and my family thought because I was studying chemistry, I would be living a different life and I’d be spending my days doing analysis and wearing a lab coat.

“For them, my work with slime has been a bit of a shock, but I have known for a while that this is what I want to do.

“I just never expected to blow up so much online.”

Reflecting on his sudden rise in popularity, he said he thinks people enjoy the shock factor when he destroys the food and it becomes clear it is just putty.

He added: “There is some shock as people always think it’s food, and then I destroy it and in that moment it is left just as slime.

“I always get messages from people who thought it was going to be a food recipe and they leave a bit disappointed.”

He added: “I read the comments every day and I try to see what people think and what they want to see.

“There are many who will get angry when they see it is not food. But for me it means my creations look great.”

And Mr Telese is a consummate professional when it comes to his TikTok videos – never switching off and always dreaming up new material.

He said: “I commit quite a lot of hours each week to doing this. I never switch off. All I think about is what I can create or recreate.

“Even if I am going for a walk if I see an attractive pastry I think about how it can be made using slime.

“In the morning and afternoon I will try to film the videos, as there is good sunlight.”

He added: “I spend about seven hours a day doing this. It’s a lot of work, but it is fun.”

So far, he has produced more than 1,000 slime creations and makes between one and two videos each day.

He is also mindful not to leave waste and reuses the slime wherever possible.

He said: “My entire one bed apartment is pretty much dedicated to slime.

“I have made more than 1,000 slime creations. I make about two videos a day. I publish a video every single day.

“And I recycle where possible. What I’m doing really is slimetastic!”