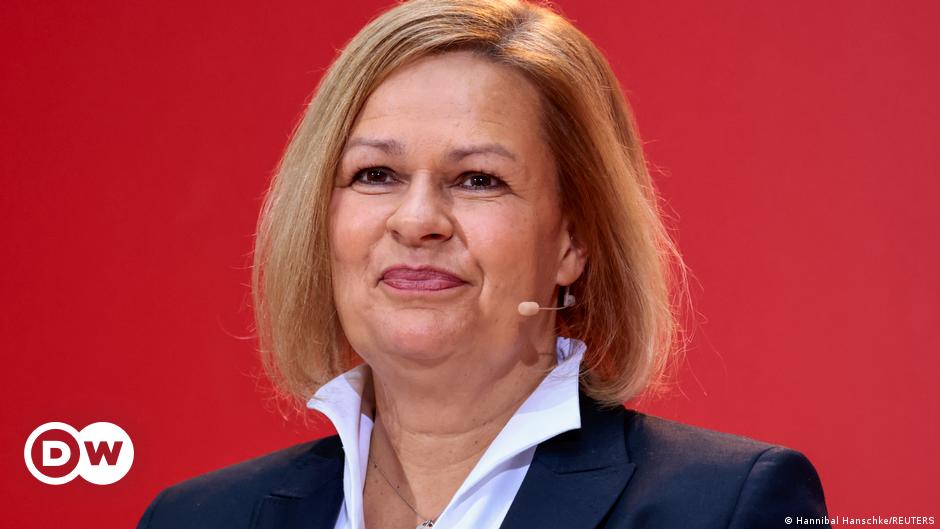 Nancy Faesar is no stranger to dealing with enemies of an open, democratic and diverse society. The new German interior minister hails from the central German state of Hesse,  which has repeatedly made the headlines because of right-wing extremist attacks. The most notorious took place in Hanau in February 2020, when a racist attacker shot nine people in a hookah bar.

Even before that, Hesse hit international headlines in June 2019 when a neo-Nazi murdered the center-right Christian Democrat (CDU) local politician Walter Lübcke, because of his support for refugees.

And back in 2006, Halit Yozgat was shot in an internet cafe in Kassel, the ninth of ten victims of the National Socialist Underground (NSU), a neo-Nazi terrorist group.

In charge of intelligence service and police

Nancy Faeser has placed herself in the tradition of anti-fascists and women’s rights activists. The mother of a six-year-old son is a trained lawyer and spent time studying in the United States before joining an international law firm in Frankfurt. In the negotiations to form the new coalition for Germany’s new governemnt, she was a negotiator for her center-left Social Democrats (SPD) on the issues of migration and integration — key topics for the Interior Ministry.

As a member of the Hesse state parliament from 2003, Nancy Faeser has had to deal with far-right extremist crimes time and again. And now she will face similar challenges at a national level in her new job in Berlin.

As Minister of the Interior, Faeser is responsible for security in Germany. She is in charge of such important agencies as Germany’s domestic intelligence service (BfV), the Federal Criminal Police Office (BKA), and the federal police. She is the first woman to hold this role.

In March 2021, Faeser addressed the Hesse state parliament and explained: “The fight against right-wing extremism is what has led me personally into politics.”

She referred back to past Social Democrats who fought against Adolf Hitler and Nazism like Otto Wels or Kurt Schumacher, and the West German Chancellor and Nobel Peace Prize winner Willy Brandt.

She knows from her own experience what can happen if you stand up against right-wing extremism and for equal rights: She received personal threats from the “NSU 2.0” in an allusion to the original NSU terror group that killed ten people.

On the anniversary of the Hanau attack, Nancy Faeser (l) joined other mourners to lay a wreath

Other female politicians in Hesse received threats, too. And there were links to the Hesse police: Seda Basay-Yildizs, a lawyer for an NSU victim received death threats. It then emerged that her confidential data had been accessed from a police computer in Hesse. It is still unclear whether the data breach was intentional or a result of negligence.

As a member of the NSU investigation committee of the Hessian state parliament, Faeser looked into the circumstances surrounding Halit Yozgat who was shot and killed by the right-wing terrorists while an informant of the state domestic intelligence service sat next door and saw nothing. It has proved impossible to clear up that case, as the state’s local government of center-right CDU and the Greens wants to keep the files under lock and key.

The leader of the Left Party, Janine Wissler, also knows the new German Interior Minister from that time. “I worked well with Nancy Faeser in Hesse, especially during the NSU investigation committee,” Janine Wissler told DW. She described Faesar as a committed comrade-in-arms in the fight against right-wing violence and threats such as the “NSU 2.0.”

As the leader of the opposition in Hesse, Faeser repeatedly accused the CDU-Green state government of serious failures in the fight against right-wing extremism. Now Kaeser will take up the fight against extremism at the federal level, where the focus of German and international public attention is high.

Data protection issues may prove controversial in the new coalition government in Berlin. Both the Green Party and the neoliberal Free Democrats (FDP) oppose the highly controversial data retention law, which pits them against Kaeser’s.

The two smaller parties are also skeptical of the German Federal Intelligence Service’s (BND) mandate to monitor telecommunications — which the Federal Constitutional Court has ruled to be unconstitutional.

In short, when it comes to security policy, the new federal government is by no means united. For Nancy Faeser, this will be a new experience. After all, as German interior minister, she will be dealing with larger issues of national and international security architecture than she has been doing as opposition leader in a German state.

This text has been translated from German.

While you’re here: Every Tuesday, DW editors round up what is happening in German politics and society. You can sign up herefor the weekly email newsletter Berlin Briefing, to stay on top of developments as Germany enters the post-Merkel era.