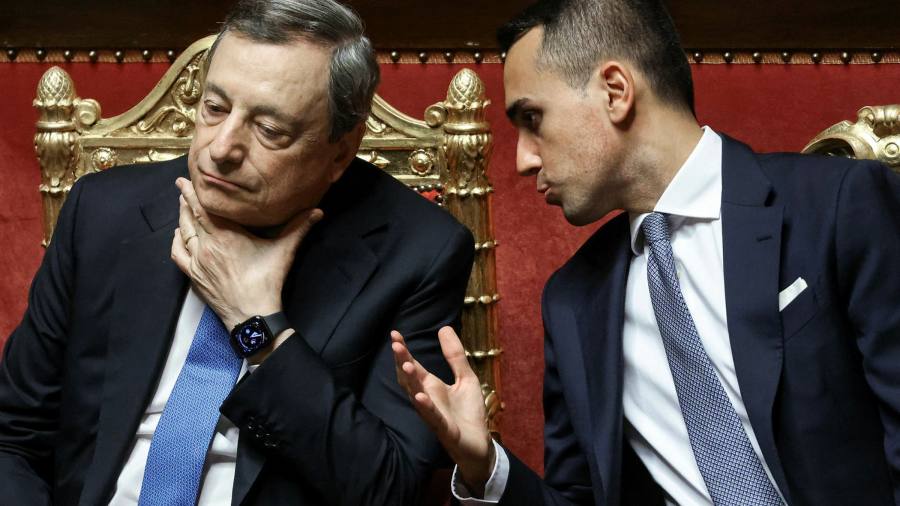 Italy’s Five Star Movement, the largest party in Mario Draghi’s national unity government, is splitting after its leaders fell out over Russia’s invasion of Ukraine and Rome’s provision of military aid to Kyiv.

The anti-establishment Five Star led a populist surge in the 2018 elections, wooing disgruntled Italians with rhetoric against political elites and EU bureaucrats in Brussels. But after four years in power, the party has haemorrhaged support and is divided over its stance on the Ukraine war.

Foreign minister Luigi Di Maio, one of the Five Star’s most prominent figures, is solidly behind Draghi’s staunch support for Kyiv, and backs the supply of weapons, in line with the US and EU.

But party leader Giuseppe Conte, who preceded Draghi as prime minister, is critical, arguing that arming Ukraine is merely prolonging the conflict.

Tensions came to a head on Tuesday night, as Di Maio declared he was walking out of Five Star — and taking at least 60 of its 227 lawmakers with him — to form a new pro-government parliamentary group that will remain part of the ruling coalition.

Though Five Star’s schism does not have immediate repercussions for the Draghi government’s stability, there is speculation that Conte could eventually move pull his more radical wing of the party out of the governing coalition.

Five Star “had the duty to support the government without ambiguity”, Di Maio told a late-night press conference, after a day of intense speculation about his imminent withdrawal. “At this historic juncture, supporting European and Atlanticist values cannot be seen as a fault.”

Five Star’s implosion highlights how the war in Ukraine is roiling politics in Italy, which traditionally maintained warm ties with Russia, has strong pacifist tendencies — actively encouraged by the Catholic church — and is historically suspicious of Washington’s role on the international stage.

Since the Russian invasion in late February, Draghi, the former European Central Bank president installed as prime minister amid a political crisis last year, has turned Italian foreign policy on its head, showing little sympathy for Moscow, and pushing the EU towards stronger co-ordinated action to support Ukraine.

But as the conflict drags on, Draghi’s hardline approach is becoming an increasingly fraught domestic issue for the parties in his unwieldy ruling coalition, especially as the disruptive economic consequences hit Italian households and next year’s general elections loom larger.

“Public opinion is not the same as the government’s,” said Daniele Albertazzi, a professor of politics at the University of Surrey. “The bulk of public opinion is not pro-Putin and pro-Russia but they are very sceptical of the motives of Nato and the extent to which they might be inflaming the situation and making it worse.”

Luigi Scazzieri, a senior fellow at the Centre for European Reform, said the war looked set to emerge as the prism through which other domestic political disputes will be viewed as next year’s general elections draw closer.

“The war becomes this all-encompassing phenomenon that has all these hot button consequences in terms of energy, food security, migration and economic recession,” he said. “It’s becoming a very big issue that has divisions within parties as well as between them.”

Five Star’s popularity had sharply eroded in recent years, as it struggled to evolve from protest movement to governing party. Polls show it is now favoured by less than 15 per cent of the electorate — down from nearly 33 per cent in 2018 — and has lost control of many key city governments in local elections.

But Alessandro Marrone, director of the defence programme at the Rome-based Institute for International Affairs, said the Ukraine war put fresh strains on a movement filled with activists influenced by Italy’s pacifist, anti-American tradition.

“Five Star has become more and more mainstream over the past four years, with a more Europeanist and pro-Atlantic position, but a component remains sceptical about it,” he said.

Five Star is not the only populist group in Draghi’s coalition now feeling the heat. Matteo Salvini’s rightwing League — which had formal ties with the United Russia Party allied with Russian president Vladimir Putin — is also struggling, with recent polls showing it is favoured by less than 15 per cent of voters, down from 30 per cent two years ago.

The travails of Five Star and the League are benefiting Giorgia Meloni’s Brothers of Italy, which is rooted in post-fascist politics, and is the only party in parliament not to have joined Draghi’s coalition. Its poll ratings have risen from single-digits two years ago to more than 22 per cent now.

While Salvini is widely expected to contest next year’s elections in an alliance with Meloni’s party, the future direction of Five Star is unclear.

“Five Star is decomposing,” said Albertazzi. “They don’t know where they are going, they don’t know who they want to be. The electorate can see this — and step by step, they are disappearing.”