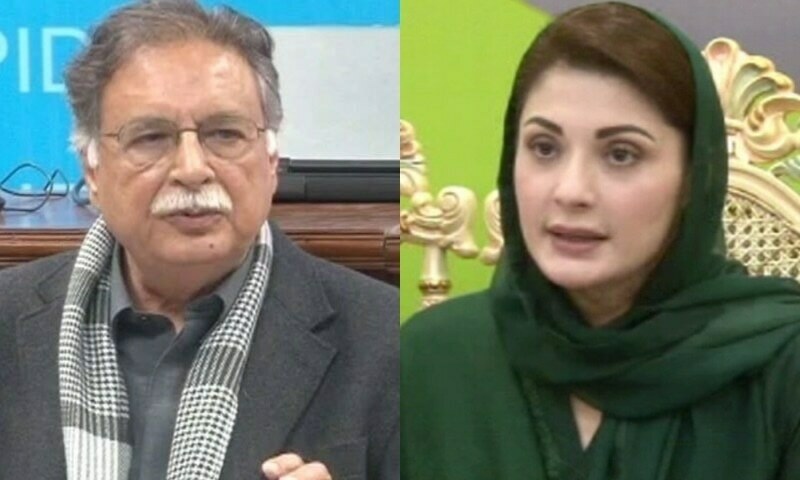 Minister of State for Information Farrukh Habib on Tuesday lambasted the PML-N after another audiotape, allegedly of PML-N Vice President Maryam Nawaz and party leader Pervaiz Rashid, was leaked online in which the two purportedly talk about the “bias” of certain journalists.

The audiotape, which was shared by ARY News and Samaa TV online, has not been independently verified by Dawn.com. In the clip, Rashid can allegedly be heard saying: “They have a programme ‘Score Card'” in an apparent reference to Geo News’ well-known show Report Card.

“You know [journalist] Hasan Nisar is included in the programme who abuses us (PML-N) a lot,” he allegedly adds.

Meanwhile, Maryam allegedly says that anchorperson Irshad Bhatti also appears on the show, to which Rashid responds that Bhatti too “talks very vulgarly”. The two then allegedly speak about veteran journalist Mazhar Abbas who, Rashid claims, is “tilted against us and spins [things] to make fun of us”.

“Nobody there can be called our spokesperson. [Analyst Hafeezullah Niazi] did not give our point of view but the way they abuse us … he would treat Imran Khan the same way. They have removed him and discontinued his column,” Rashid allegedly says.

At this point in the alleged audio, Maryam says she would first ask Niazi the reason for his removal from the panel and then take up the matter with Jang Group owner Mir Shakeelur Rehman.

“It will become an imbalanced programme. If there was a check on Imran Khan, you have ended it and [imposed] barking dogs on us,” Rashid allegedly says.

“Indeed, this is bias,” Maryam purportedly responds. Towards the end of the clip, Maryam allegedly passes instructions that a pair of baskets that former prime minister Nawaz Sharif brought from Azerbaijan should be sent to journalists Nusrat Javeed and Rana Jawad.

Reacting to the alleged video clip, Habib, the state minister, said the PML-N had “vast experience and [expertise] of blackmailing and controlling freedom of media”.

According to a report by Radio Pakistan, the minister said PML-N “always kept the media under pressure to use it for their vested interests”. The alleged audiotape had “exposed” how the party was playing tricks to control media freedom, he added.

For his part, one of the journalists mentioned in the alleged audiotape, Mazhar Abbas, sarcastically thanked the PML-N leaders. “I am proud of my journalism and stand by my comments [and] critical views. One should agree to disagree but ‘zaban apni apni‘ (to each their own),” he tweeted.

“Just for the record Pervaiz sb, its Report Card not Score Card,” he added.

This is the third such ‘leaked’ audiotape attributed to the PML-N leader in as many months; she has accepted only one as genuine.

In November 2021, Maryam, while addressing a press conference, had admitted that an eight-second clip, in which she can be heard saying: “No ad at all will be given to Channel 24, Samaa, 92 News and ARY“, was genuine.

The PML-N vice president had admitted that the voice in the clip was hers, saying: “I am not saying it has been compiled from different [separate] occasions. It is my voice.”

When asked about the clip again, Maryam had said it was an “old” clip from the time she was managing the PML-N’s media cell, refusing to comment further.

During her father Nawaz’s government, Maryam was heading the then little-known Strategic Media Communication Cell (SMCC) operating out of the Prime Minister’s Office.

Set up with the special approval of the then prime minister as part of the information ministry in late 2014, the SMCC quickly evolved into a powerful unit, working under the watchful eye of Maryam, Dawn reported at the time.

Another audiotape emerged in December in which Maryam seemed to be praising her “media management”. In the short clip making the rounds on Twitter, the PML-N leader allegedly said: “Look at my media management. Geo News and Dunya News have [ruined them].”

It is unclear when the clip was recorded and to what series of events she was referring to in the five-second clip.

However, this time round the PML-N leader remained tight-lipped. Speaking to the media outside the Islamabad High Court , Maryam was asked about the alleged audio clip and whether it was actually her.

“I have already answered this, and clearly given an answer,” she had said, moving on to the next question.