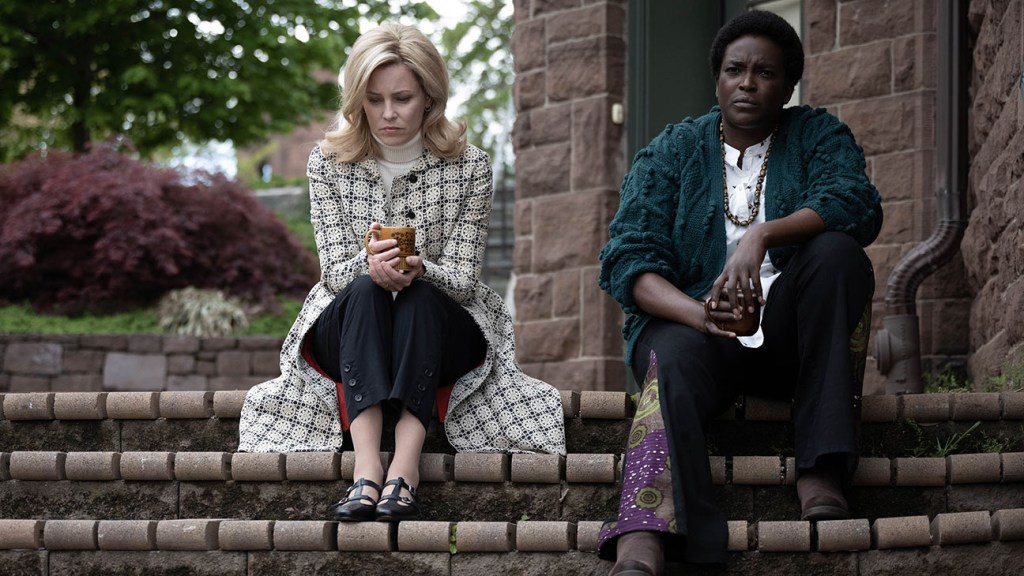 A bracing and intimate view of a historical moment that’s less distant than we might think, Call Jane opens with a brilliant sequence that begins in a posh Chicago hotel, where an elegantly dressed woman drifts away from her husband’s business shindig. As the camera follows her through the lobby, her blond updo calls to mind another movie character, Kim Novak’s in Vertigo — a woman under the thumb of men if ever there was one. By contrast, Joy (Elizabeth Banks) is a sturdy, cheerful suburbanite who keeps a household humming and helps her husband with his legal briefs, and she would never describe herself as being under the thumb of anybody. Then a medical emergency makes it brutally clear that, according to the laws of the United States, her life is not entirely her own.

Call Jane is the story of a fictional character’s life-changing involvement in the Jane Collective, an underground service that provided safe abortions for women when they were still illegal. It takes its title from the message printed on flyers posted in Chicago in the late ’60s and early ’70s, sheets of paper that announced an open secret and offered salvation to women with no other options. The group’s courage and compassion are explored in another Sundance selection, the documentary The Janes. (One of the figures profiled in the doc, Judith Arcana, is credited here as a research consultant.) The two films would make an inspiring double feature — and, should the Supreme Court overturn the 1973 ruling that rendered the Janes unnecessary, they could also serve as primers in reproductive justice.

A beautifully wrought portrait of ladies on fire.

The Janes tells a communal story, and certainly the power of collaboration and a shared sense of urgency drive Call Jane. But drama usually requires a protagonist, and the screenplay by Hayley Schore and Roshan Sethi gives us a compelling one in Joy, with Banks delivering her most complex and stirring feature-film performance in years.

Though the screenplay might hit a point or two rather neatly on the head, Carol screenwriter Nagy, at the helm of her first theatrical film (she directed a starry cast in the 2005 true-crime TV movie Mrs. Harris), builds a subtle and affecting sense of time and place, with nods to ’70s indie filmmaking. The character-driven design contributions from Jona Tochet and Julie Weiss are steeped in a lived-in period palette, pops of vibrancy included. A soundtrack of refreshingly unobvious ’60s rock and funk weds well to the action, and Isabella Summers’ eloquent score offers keens of alarm and suspenseful percussive riffs, emphasizing the sense of upheaval, life-or-death danger and galvanic optimism that we experience through Joy’s eyes.

Banks, who memorably played Laura Bush in W., has a knack for getting beneath the carefully coiffed surface of characters that some people would write off based on their politics or appearance. She embodies the restless intelligence and the paradox of Joy, who becomes a key member of a revolutionary enterprise while keeping up appearances in well-heeled Republican suburbia.

In the scenes that open the movie, Joy’s husband, Will (Chris Messina), is celebrating having been made a partner at his law firm. Elsewhere in the city the Democratic National Convention is underway, unmentioned but signaled by the “August 1968” title that appears onscreen, and by the Yippie demonstration outside the hotel. We hear the protesters but don’t see them; it’s Joy’s reaction that Nagy cares about. She’s shaken by the commotion, but also drawn to the energy and passion of it, to the idea of a world in flux. On the ride home, the words “shifting” and “current” flicker through her comments to Will.

When he pulls their sedan into the driveway at the end of their night out, Joy waits for him to open her car door; for a woman of her generation and upbringing, that’s how things are done. And yet something is pulling at the edges of this conformity. Betty Friedan’s The Feminine Mystique hit the cultural conversation a few years before this story begins, and a couple of years later a women’s collective in Boston will publish Our Bodies, Ourselves. Joy’s widowed neighbor, Lana (Kate Mara, superb), is reading Diary of a Mad Housewife, albeit through a veil of doctor-prescribed pills and afternoon cocktails. (In another echo of Vertigo, Lana’s daughter asks Joy if she “went blond” for her husband.)

Perhaps Joy is thinking about shifting currents because she’s pregnant with her second child. The way she grooves to a Velvet Underground album from the collection of her 15-year-old daughter, Charlotte (Grace Edwards), signals that she’s poised for an awakening. It arrives with a devastating blow: Medical complications put her life at risk if she proceeds with the pregnancy, but the law forbids her to terminate it. She’s required to seek the hospital board’s permission for a therapeutic abortion. Unsurprising fact number one: The board members are all men. Number two: They say no.

Will is the kind of straight-arrow guy who doesn’t want to pull strings with the medical establishment, afraid that this would compromise his credibility and his career. After trying a few unsatisfactory options that lead her to an abortionist’s grungy apartment, which she flees, Joy happens upon a bus-stop flyer that beckons the pregnant and anxious to “call Jane.”

And yes, this is a story that focuses its outrage over social injustice through the lens of a privileged character and the “it can happen to anyone, even the white wife of an attorney” angle. But Nagy, Schore and Sethi acknowledge this, and the fact that the ban on abortion disproportionately affected women who are poor, Black or brown. Matters of race and class burst to the surface of the film in a brief but charged debate between Gwen (Wunmi Mosaku), the Janes’ sole Black member, and Virginia (Sigourney Weaver), the group’s imperious and passionately dedicated leader.

Virginia and Joy could go toe-to-toe in terms of competence and resolve. But the former, a dyed-in-the-wool grassroots activist, knows how to navigate life on the other side of the law, as outlined in an exposition drop that’s jarring amid the otherwise nuanced dialogue. The two women meet right after Joy’s abortion, in one of the collective’s apartments, where Joy is offered a blanket and a comforting bowl of spaghetti along with friendly, irreverent banter and her first taste of 1960s bohemia.

Played without an ounce of sentimentality by Weaver, Virginia has a way of getting what she wants, and once she’s assured that Joy has healed, she ropes her into helping another client. One such favor leads to another, and then to full-on commitment, with Joy’s increasingly frequent evening absences, attributed to “art class,” understandably raising the suspicions of Will, and of Charlotte especially. Played with a deadpan sensibility that’s reminiscent of Alia Shawkat, Charlotte doesn’t always track as a character, until you recognize that she’s a conflicted teenager who may have a defiant streak but is still largely sheltered from, and confused by, the turbulent times in which she’s coming of age.

Unlike many people in her circumstances, Joy is curious about the political mood rather than repelled by it. And she finds purpose with the Janes, eventually becoming de facto assistant to Dean (Cory Michael Smith), the man who performs abortions for the group’s clients. An unlikely combination of boyish bowl cut and outsize swagger, he’s an unsettling and fascinating character, committed more to the money he makes than he is to the women’s cause. Smith is one of three relatively unfamiliar actors in the cast, the others being Edwards and a terrific Mosaku, who make an impact in key supporting roles. The director steps away from Joy’s POV for a beautifully played scene between Smith and Weaver, their characters negotiating a business deal over vodka shots.

As for the abortions themselves, Nagy and cinematographer Greta Zozula focus on the vulnerability, not to mention the metal instruments involved. There’s a breathtaking moment when Joy, mid-procedure, having finally found a safe solution to her life-threatening predicament, blurts out to Dean, “I’m scared!” Keeping the film grounded in character, Nagy eloquently reminds us at every turn that what has been labeled a crime is a medical procedure, and underscores how personal all this is for the women.

Along the way, and not without humor, Joy learns to discard her moralistic assumptions about Jane’s clients. The devoted Virginia is her guide on that front, and like Virginia the film refrains from casting judgment. Dean, for all his flaws, is also a life-saver, and never dismissed as a villain. Will is a good guy, however blinkered and old-school. “Did something happen today?” he asks a fired-up Joy over the dinner table. If he only knew. Messina taps into his character’s sensitivity as well as his cluelessness, and a couple of scenes between him and Mara’s sad-eyed Lana are heart-stopping portrayals of messy, fumbling decency and grace. Even an undercover detective (John Magaro) who confronts Joy toward the end of the film defies stereotype.

We know the achievements and victories of the era Nagy depicts, and yet, because she and her fine cast bring the story to such vivid, immediate life, the final moments of Call Jane are powerful with unanticipated joy. They sting too, because we know where we are now, and the trajectory of the intervening years.