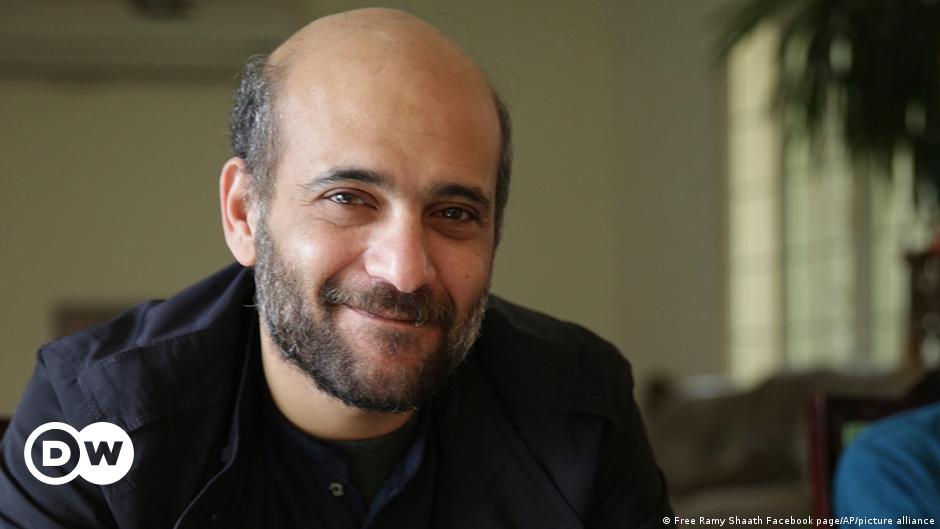 Egyptian authorities have released Ramy Shaath, an activist and son of a prominent Palestinian politician, his family said on Saturday.

Shaath was freed from jail on Thursday evening.

According to Shaath’s family, he was handed to a Palestinian Authority representative at the Cairo International Airport, where he took a flight to Jordan.

He was set to arrive on Saturday in France, where his wife lives.

Celine Lebrun-Shaath, wife of Ramy Shaath, has lobbied the French government to pressure Egypt for his release

There was no immediate comment from Egyptian authorities on Shaath’s release.

Released under a ‘precondition’

Shaath, a dual Egyptian-Palestinian national, served over 900 days in pre-trial detention. His family said he was forced to renounce his Egyptian citizenship.

“If we are glad that the Egyptian authorities heard our call for freedom, we regret that they forced Ramy to renounce his Egyptian citizenship as a precondition for his release that should have been unconditional,” the family statement said.

“No one should have to choose between their freedom and their citizenship. Ramy was born Egyptian, raised as an Egyptian, and Egypt has always been and will always be his homeland,” it added.

Why was Ramy Shaath jailed?

In July 2019, the activist was arrested at his home in Cairo. He had been accused of being affiliated to the outlawed Muslim Brotherhood group, which Egypt designated as a terrorist organization in 2013.

His detention, alongside other activists, came amid a crackdown on political dissent, including liberal and Islamist critics of President Abdel Fattah el-Sissi.

Last year, he was added to Egypt’s terrorist list.

Ramy Shaath is a co-founder of the Egyptian branch of “Boycott, Divestment and Sanctions” (BDS), a Palestinian-led movement promoting a boycott of Israel.

He is the son of former Palestinian government minister Nabil Shaath, a close aide to the Palestinian President Mahmoud Abbas.

Shaath’s wife lobbied in France for his release

Shaath’s wife Celine Lebrun Shaath, a French national who had been deported from Egypt, lobbied the French government to pressure Cairo for his release.

Macron had said last year that he brought up Shaath’s case with el-Sissi. Still, the French leader insists that Egypt’s human rights record would not be a condition for economic and military ties between Paris and Cairo.

In May, France said it would deliver 30 Rafale warplanes to Egypt from 2024 in a €4-billion ($4.8-billion) deal, strengthening its military partnership with Cairo.