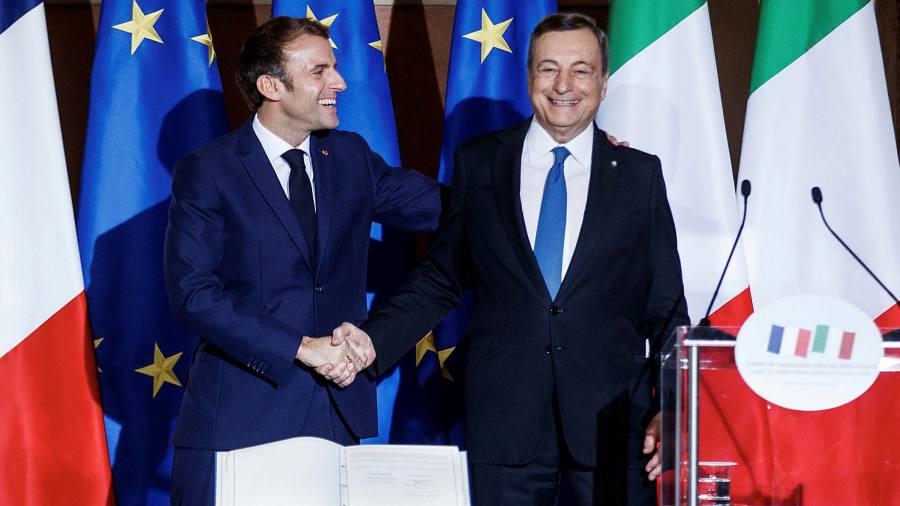 The leaders addressed the need for greater EU co-ordination on budget rules, investment and migration, and to tackle other common challenges such as energy transition.

“As for the budgetary rules that were in force until before the pandemic, they had already proved to be insufficient since the [global] financial crisis,” Draghi said at a press conference in Rome on Friday. “Today the revision [of the rules] is inevitable, not only because of the very high cost of the pandemic in economic and social terms but also because of the future challenges of the EU, from the fight against climate change to new technologies, to the gigantic investments in semiconductors. We need to correct our past and design our future.”

Macron did not comment on fiscal reforms, but France has long advocated a review of the EU’s budget rules, known as the Stability and Growth Pact. A consultation is under way over how to amend the rules, which were suspended when the coronavirus crisis broke out, with intense discussions expected over how much leeway to give member states on their public finances.

Reflecting warmer ties after the more fractious relationship of recent years, France and Italy signed the Quirinale Treaty at a time when European diplomacy is being tested by the departure of German chancellor Angela Merkel. Italy’s closer links to France give Draghi’s government an opportunity to play a more active role at EU level.

Macron dismissed the idea that the treaty would signal a shift in European leadership. Paris and Berlin have a similar alliance dating back to 1963. “You shouldn’t see, in the friendship that we’re building across the Alps, a substitution for the friendship we’re consolidating across the Rhine,” Macron said, adding that the alliances were complementary.

For France, which is due to take on the presidency of the EU from January, closer ties with Italy could help Macron bolster the moderate, western European core of the EU. “We’re going to put our affinities at the service of the European project even more resolutely,” Macron said.

Plans for closer co-operation between Italy and France were first discussed in 2017 but shelved a year later by the ruling coalition of League and Five Star, which clashed badly with Paris over migration. France recalled its ambassador from Rome in 2019 after Luigi Di Maio, Italy’s then deputy prime minister, met anti-Macron yellow vest protesters.

Now, with the former European Central Bank president at the helm, Italy’s nationalist-populist impulses have been so tamed that even League backs the talks with France.

The treaty comes at a moment of relative tranquility in Italian politics and before next year’s presidential election in France, in which Macron is expected to seek re-election. Italy’s president Sergio Mattarella steps down next year. There has been much speculation in Rome about whether Draghi intends to replace Mattarella as president, or remain as prime minister until the end of the current parliament in 2023.

“We must equip the EU with instruments that are compatible with our ambitions and the expectations of our citizens. The treaty we signed today marks the start of this journey,” Draghi said.