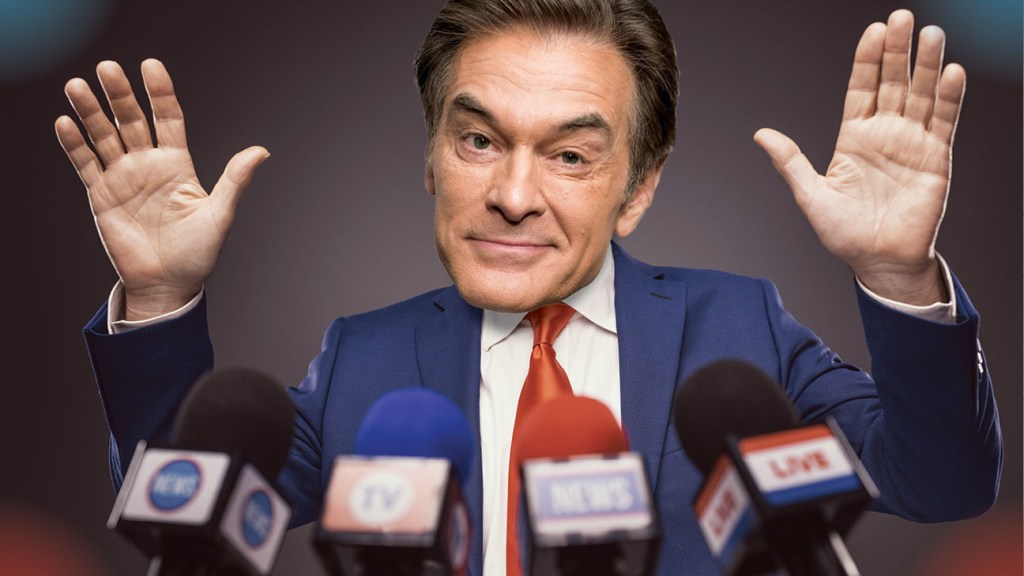 The 2022 elections are still nearly a year away, but as Dr. Mehmet Oz makes a run for the Senate in Pennsylvania, his old partners in the entertainment space had better be prepared for blowback.

Already, Oprah Winfrey is taking fire on social media for helping launch this celebrity. And if Winfrey gets to experience what Mark Burnett perhaps felt back in 2016 when a certain Apprentice star announced a presidential candidacy and many cried out, “How could you?” Sony Pictures Television may also grapple with an association that grows increasingly under fire through the political campaign process.

Once upon a time, Sony was quite proud of Oz, who made dozens of appearances on Winfrey’s show before commanding his own. When The Dr. Oz Show launched in 2009, the Harpo-produced, Sony distributed talk show was the highest-rated first-run syndication premiere in seven years. Sony execs bragged about the show’s success in speeches.

And the feeling was mutual: The now 61-year-old cardiothoracic surgeon would make sure to congratulate then-Sony TV chairman Steve Mosko when the studio’s Breaking Bad won Emmys, would gift a platter of smoked fish for the winter holidays to Sony’s then-chairman Michael Lynton and attempt to connect with another part of the Japanese conglomerate once he realized it was in the wearable health device market.

When Oz started hawking the questionable benefits of certain diet pills, though, tensions arose. Lawmakers, class action lawyers and prominent professionals in the medical community slammed the TV doctor for embracing junk science. Oz was hauled before Congress to testify, and producers of his show would sign off on a $5.25 million deal to settle false advertising claims in 2018.

The parade of controversy did not abate. Pennsylvania Senate race is expected to be one of the closest elections nationwide in 2022, with an outcome that could swing control of the upper chamber to either party. Oz’s show was pulled in the New York and Pennsylvania markets, likely to get ahead of broadcasting regulations that mandate equal time for rival election candidates. (Oz is running as a Republican, and the GOP’s previous frontrunner, Sean Parnell, dropped out amid a domestic dispute; the seat is currently held by Republican Pat Toomey, who is retiring.)

That should be discomforting to Sony TV, which spent much of the past year addressing — quite poorly, say many industry insiders — multiple issues at one of its other top syndicated shows, Jeopardy! After EP Mike Richards essentially named himself the new Jeopardy! host, reporters spent months digging through old court filings, speaking to colleagues and listening to Richards’ comments on podcasts. An uproar about Richards’ attitude toward women caused hell for Sony, which eventually decided to cut Richards loose.

With politics involved, Sony — which hasn’t made any big structural changes since the Jeopardy! fiasco — may be in for another round of public fire over one of its top franchises. Ask NBC and MGM, both of which came under tremendous pressure in 2016 to release Apprentice outtakes to check out allegations of racism and sexism by the star.

And the problem doesn’t end there. Sony may worry about public sentiment from any forthcoming revelations about Oz, but just as concerning could be any reaction from the candidate himself. Should Sony or Winfrey attempt to distance themselves from him, Oz may lean into the controversy and claim being a victim of cancel culture. Why would he do that? As the recent Virginia governor’s race shows — GOP businessman Glenn Youngkin defeated former Gov. Terry McAuliffe — Republicans see culture wars as a winning ticket to power these days. Oz already has shown that such a move is in his playbook.

Back in 2015, when some of his medical colleagues rallied together to strip him of his faculty position at Columbia, he attempted to position this as a civil liberties issue. In an essay for Time, one that would lead to Oliver’s segment, Oz wrote, “I know I have irritated some potential allies. No matter our disagreements, freedom of speech is the most fundamental right we have as Americans. We will not be silenced.”

In other words, political winds plus the discourse around cancel culture could transform entertainment companies into unwitting pawns of a larger power struggle. The only real question is whether it makes much of a difference. Says political consultant and media strategist Rick Wilson: “We really are in the new era of celebrity candidates. And everyone who has ever had a TV [brand] builds this cloud of problematic ephemera. We’ll see some nutty stuff, I’m sure, but what I’m not sure of yet is whether it’ll be persuasive to voters.”