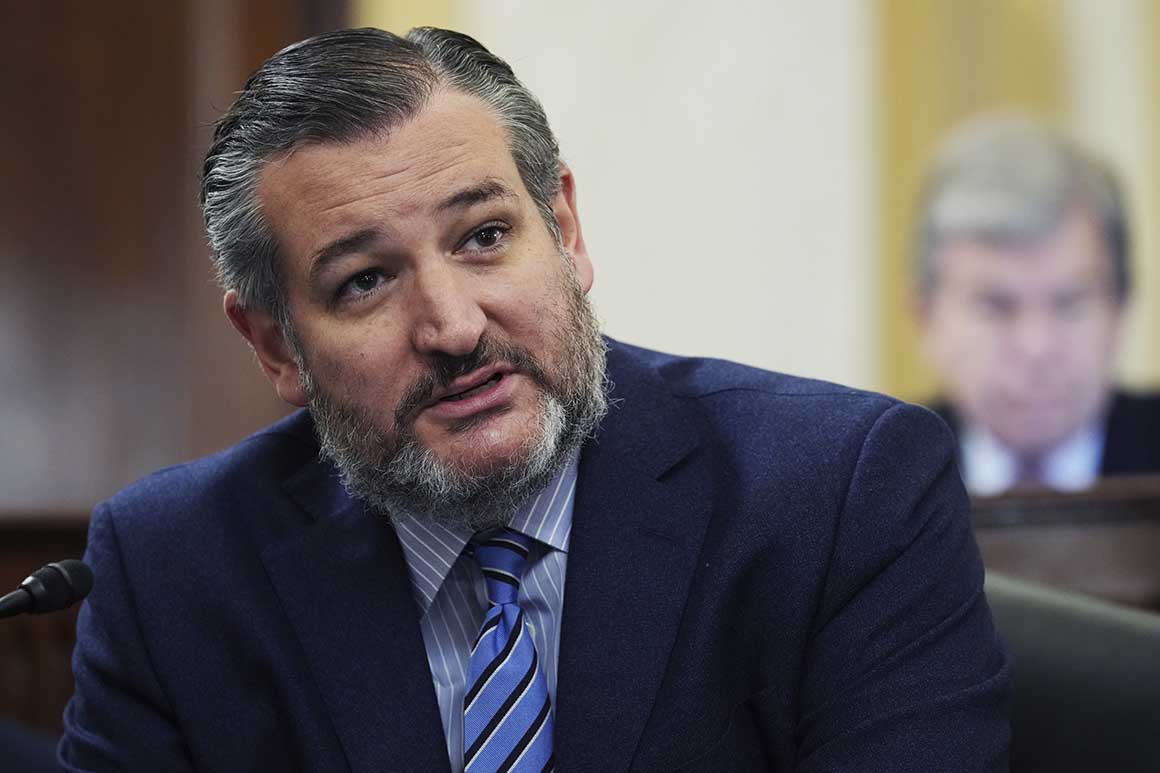 Absent a surprise development, Cruz’s bill is expected to fall short of the 60-vote threshold.

“At this point it’s very important, as we’re looking at potential Russian action in Ukraine, for us to work very closely with our allies, and Germany is one of those very important allies. And so I think the amendment is ill-timed,” Sen. Jeanne Shaheen (D-N.H.) said of Cruz’s bill. The German government has supported the pipeline’s construction because of the cheap energy it would bring into the country, despite objections from the U.S. and other European allies.

Almost every senator from both parties has previously backed the sanctions outlined in Cruz’s legislation. But given Biden’s decision last year to waive the imposition of those sanctions, supporting Cruz’s effort would pit Democrats against Biden. The Texas Republican has already taken to bludgeoning Democrats for what he calls a “capitulation” on partisan grounds.

Shaheen, who has been a leading proponent of using sanctions to shut down Nord Stream 2, could be a bellwether for Senate Democrats on the Cruz vote given her long-standing work on the issue. She opposed Biden’s decision last year to waive sanctions on the pipeline and argued in a recent op-ed with Sen. Rob Portman (R-Ohio) that the Biden administration “should seriously reconsider the imposition of sanctions” on Nord Stream 2.

However, Cruz’s bill, which requires sanctions to be imposed within 15 days of being signed into law and allows Congress to vote to reinstate the penalties if the president waives them, gives Shaheen “serious reservations.” She is leaning against it.

Sen. Chris Murphy (D-Conn.), a top Senate Foreign Relations Committee member, said he was working to try to defeat Cruz’s bill, arguing that it would pull the U.S. away from its European allies at a time when unity is essential to counter Russia’s aggressive behavior in the region.

“This isn’t about Russia. This is about a Cruz-Trump agenda to break up the trans-Atlantic alliance. This is a moment where we need to be in solidarity with the administration as they try to use a carrot-stick approach with the Russians to prevent an invasion,” Murphy said in a brief interview. “Sending a wedge into the trans-Atlantic relationship right now would not be productive if our end goal is to try to save Ukraine from an invasion.”

The pipeline, which is effectively complete but awaiting certification, is now being used by the U.S. and its European partners — including Germany — as leverage against Russia, warning that the pipeline won’t become operational if Putin moves on Ukraine.

“I have no lost love for Putin and Russia, but I don’t want to do anything that’s going to hurt our security,” said Sen. Dick Durbin (D-Ill.), the Democratic whip.

“The only conceivable reason they might vote no is if they make the cynical decision to put partisan loyalty above U.S. national security interests,” Cruz said in an interview. “The only problem with the legislation is the president is a Democrat. They all voted for it when the president was Trump. If the president was still Trump, every single Democrat would vote for it.”

Cruz secured the vote as part of a negotiation with Senate Majority Leader Chuck Schumer last month, in which the Texas Republican lifted his holds on dozens of Biden’s nominees to serve as U.S. ambassadors. Cruz has imposed blanket holds on State Department nominees in an effort to force the Biden administration to impose the sanctions, which were mandatory under previous bipartisan bills approved by Congress.

The vote, expected to occur next week, will be politically tough for Democrats given their previous support for similar sanctions measures. It’s made even more complicated by Biden’s refusal to impose those sanctions last year, instead waiving them in an effort to repair the U.S.-Germany relationship.

“Difficult or not, we’re gonna have to take the vote,” said Senate Armed Services Committee Chair Jack Reed (D-R.I.), who is undecided on Cruz’s bill. “And it’s going to be based upon our best judgment about what’s in the best interest of the United States.”

Other Democrats, such as Sen. Ben Cardin of Maryland, a top Foreign Relations Committee member, said Cruz’s bill has some provisions “that give me concern,” but declined to elaborate. He is undecided.

And Sen. Chris Coons (D-Del.), a top Biden ally, said he wouldn’t make a decision on the legislation until hearing from senior administration officials about “where we stand in our relationship with the new German government, and what impact there might be on our jointly standing strong in support of Ukraine and in opposition to Putin’s aggression.”

“I think it’s an important vote for us to take,” Coons said. “Circumstances on the ground continue to evolve. I don’t know the administration’s position. I expect it would be opposed.”

The deal clinched by Cruz and Schumer last month allows an up-or-down vote on Cruz’s legislation at a 60-vote threshold, meaning at least 10 Democrats will need to support it in order to pass.

Some lawmakers have suggested Schumer could give senators political cover by using a “side-by-side,” in which senators could choose whether to vote for Cruz’s bill or a separate measure that might be more amenable to Democrats. That could include Senate Foreign Relations Committee Chair Bob Menendez’s (D-N.J.) legislation to impose sanctions and other penalties only after a potential Russian invasion of Ukraine.

Just one Democrat who spoke to POLITICO on Wednesday pledged support for Nord Stream 2 sanctions. Sen. Richard Blumenthal (D-Conn.) said he would vote for whichever sanctions plan is offered. “There’s clearly a right thing to do here, so for me it’s not a difficult vote,” he said.

Earlier Wednesday, Secretary of State Antony Blinken reiterated the Biden administration’s desire to use the pipeline as leverage over Putin to dissuade him from invading Ukraine.

“It’s very hard for us to see gas flowing through that pipeline … if Russia resumes its aggression toward Ukraine,” Blinken said, adding that “strong transatlantic solidarity” is “the most effective tool that we have in countering Russian aggression.”

Quint Forgey contributed to this report.