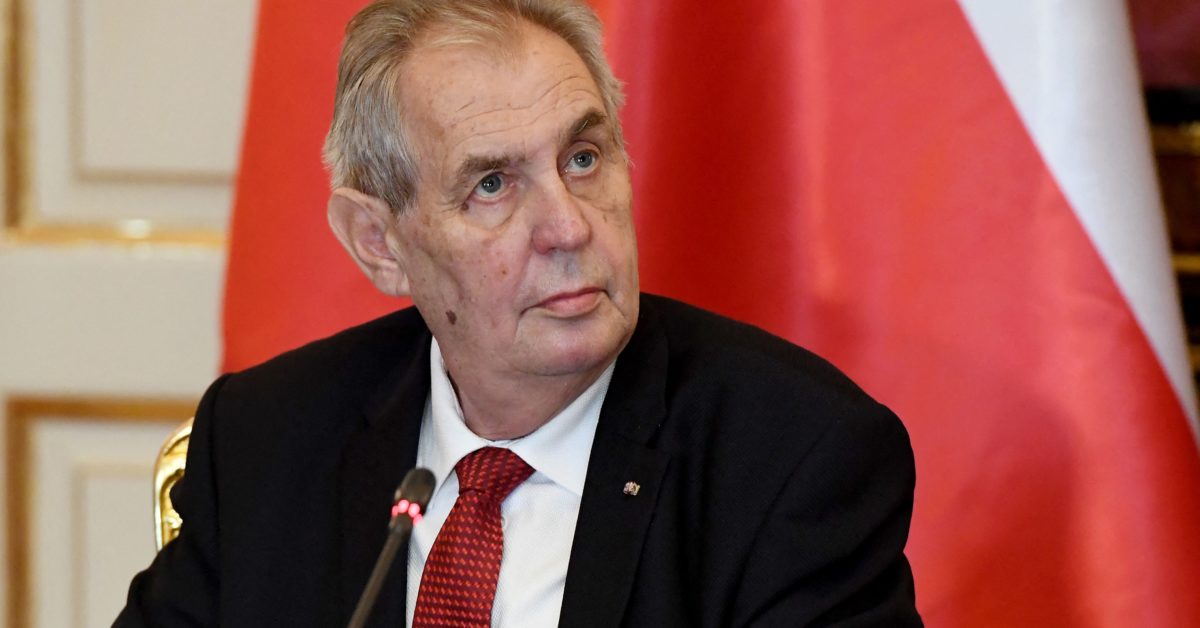 Since tapping Fiala last month to lead a new government, Zeman has been meeting with each nominee for various ministerial posts — a process that was unprecedented before he became president. But on Friday, Zeman said through a spokesperson that Jan Lipavský, Fiala’s choice for top diplomat, is not adequately qualified.

The statement noted Lipavský “completed only a bachelor’s degree, and according to the Euro weekly, his final bachelor’s thesis received the worst possible grade.”

The move further complicates the Czech Republic’s already fraught attempts to replace Prime Minister Andrej Babiš, who is on his way out after his party lost an October general election. A day after the election, Zeman was hospitalized, and his health troubles have since repeatedly delayed attempts to hand over power.

A day after leaving the hospital, Zeman tested positive for COVID-19 and spoke with the prospective ministers from a specially constructed plexiglass box.

Now, Zeman is upending the process in other ways.

Speculation had been rife in Prague that Zeman would reject Lipavský, a Czech Pirate Party member, ever since the president hinted he had issues with one of Fiala’s nominees.

Fiala reacted immediately on Friday, repeating his intention to take Zeman to the Constitutional Court over the issue.

“I take note of today’s position of the President of the Republic,” the designated prime minister said in a statement. “The Constitutional Court needs to resolve the issue of competences regarding the appointment of new members of the government once and for all.”

Fiala is due to meet Zeman on Monday to prepare the process of taking office. He said he would announce his next move after that meeting.

The Czech Republic is on untrod ground here. The Czech constitution does not overtly address the question of whether a president has the right to reject a prime minister’s ministerial nominees for any reason besides criminal activity or conflict of interest.

Zeman has been the only president to use the power, having previously rejected two of Babiš’s nominees.

Babiš complied because the Czech president was largely responsible for cobbling together the coalition and political arrangement that kept his minority government in power.

But Fiala has no such obligation. His five-party coalition government has a comfortable majority of 108 MPs in the 200-seat Chamber of Deputies.

In his statement, Zeman also took issue with Lipavský’s positions toward the Visegrád Group of nations, as well as toward Israel, arguing his stances are “in conflict with the prepared program statement of the new government.”

“Perspectives are completely different on some of the most basic foreign policy issues,” he told Czech Television.

Regarding Visegrád, Fiala’s three-party SPOLU (or “Together”) coalition has only noted in its program that, “We will continue our strategic cooperation in the Visegrád Group.”

In addition, Zeman has long been in favor of moving the Czech embassy in Israel to Jerusalem, following in the footsteps of former U.S. President Donald Trump. Both Israelis and Palestinians have claimed the city as their capital. Lipavský is against the move, saying: “Establishing an embassy in Jerusalem as such would be contrary to international law and the EU’s common position.”