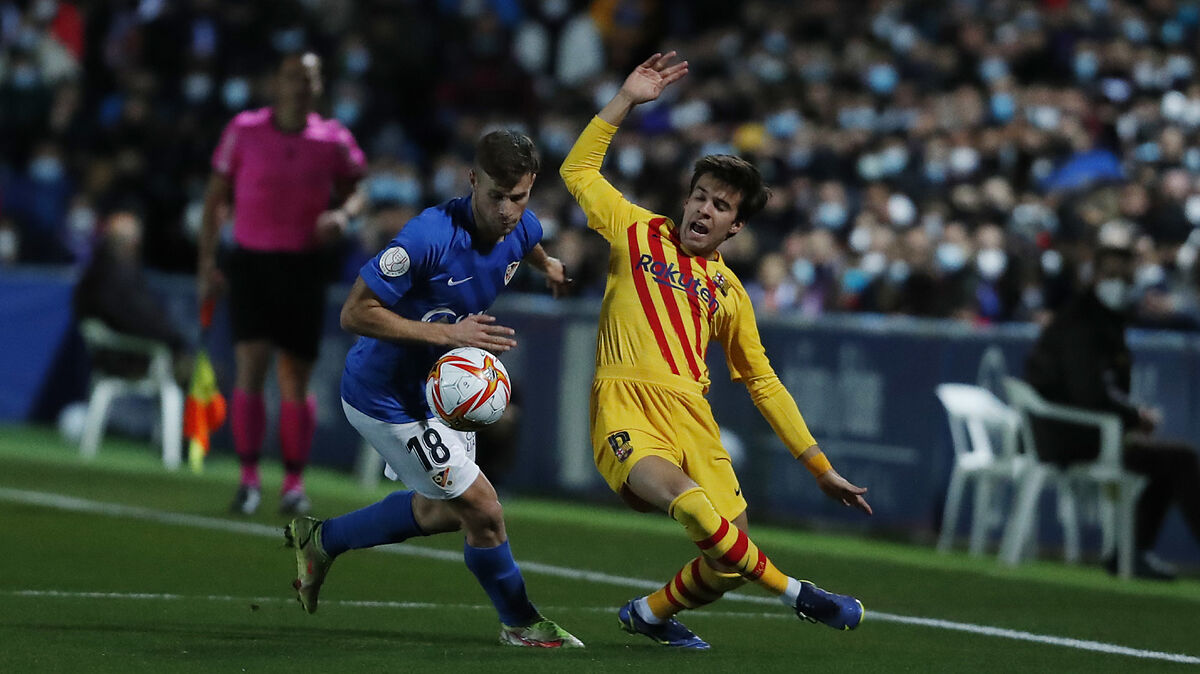 Hello everyone and welcome along to this Copa del Rey live blog, for Linares Deportivo vs Barcelona. This round of 32 match is a one-off game, meaning there will be no second chances for holders Barcelona if they slip up in Andalusia. Several youngsters are expected to given opportunities by Xavi, while Dani Alves could make his official re-debut. It should be a fascinating match.

This is the start of our Linares Deportivo vs Barcelona live blog. We’ll have all the build-up to this Copa del Rey match and then minute-by-minute updates, with the most recent entries the ones nearest the top.

Dembele turned inside, showed his acceleration and sent a powerful effort towards goal that hit the crossbar and went over.

Cristian Carracedo came in from the left and sent a curling effort towards the far post, which came back, hit the woodwork and went clear from danger.

Dembele laid the ball off to Nico on the edge of the box, but the youngster could only send his shot over the bar.

Ferran Jutgla has given Barcelona the lead here in Linares after coming in from the left, turning Lolo Guerrero inside out and sending the ball into the far corner of Razak’s goal. Linares 1-2 Barcelona.

Linares got the ball back in the net in strange circumstances from a corner, with Neto making a big mistake, but Hugo Diaz was adjudged to have interfered with play from an offside position, so it didn’t count. There is no VAR in the Copa del Rey, remember…

Dembele received the ball from Mingueza, turned away from Alvaro Barbosa and guided a left-footed shot into the bottom left corner from 25 yards out. One moment of magic has Barcelona back in the game. Linares 1-1 Barcelona.

Dani Alves sent a floated cross into the box for Frenkie de Jong to get on the end of, but Razak but the Dutchman under enough pressure to stop him from making any contact with the ball.

Ousmane Dembele has already shown a glimpse of his pace, as Carnicer had to come in from behind to stop him from making progress.

Jordi Alba send a very good cross along Linares’ six-yard box, but Ferran Jutgla was unable to get on the end of it.

Linares have kicked off this second half. Barcelona, with their three half-time changes, will be hoping for a better performance in this 45 minutes.

Xavi has turned to his bench at the break, as Gerard Pique, Frenkie de Jong and Ousmane Dembele have come on for Ronald Araujo, Riqui Puig and Ilias Akhomach.

Hugo Diaz’s 19th-minute goal is all that separates the two teams at the break. Linares started the game as the better team and were able to take advantage by finding the back of the net, while Barcelona created plenty of chances but have not been clinical enough.

A well-worked Barcelona move at the end of the half led to Dani Alves sending in a cross from the right which went all the way through to Jordi Alba, but he saw it late and couldn’t get it under control.

Jordi Alba got away from two Linares players in the box before the ball was cleared away, but it fell at the feet of Eric Garcia, whose guided effort towards the bottom corner went just wide.

Nico’s cross from the right was met by Riqui Puig, who had more space in the box than he probably realised, but he sent his volley way over the bar.

Josema brought the ball out of defence, carried it into Barcelona’s half and then picked out Sanchidrian, who sent a cross into the box for the Linares centre-back to get on the end of, but he could only send his shot wide under pressure from Araujo.

Ferran Jutgla gave the ball back to Riqui Puig on the edge of the box, but after taking a couple of touches his curling effort went comfortably over.

Ferran Jutgla opened up his body and attempted a shot from the edge of the box, but it went comfortably wide of Razak’s goal.

Some good play by Ilias led to him weaving his way through the Linares area, but Lolo Guerrero got there to clear the ball away from danger.

Hugo Diaz has opened the scoring for Linares. Carnicer’s cross from the right was met by the head of Hugo Diaz, who got away from Oscar Mingueza and seemed to have acres of space in the box. Linares 1-0 Barcelona.

Nico Gonzalez played a cute pass into the path of Ilias in the box, but under pressure he dragged his shot wide of the goal.

Riqui Puig was too weak and lost possession in midfield, which allowed Linares to counter-attack, but Fran Carnicer was unable to capitalise as he fired a shot over the bar from 25 yards out.

Neither Barcelona nor Linares have taken the game by the scruff of the neck just yet, but presumably Xavi’s side will begin to dictate possession more and more as the match goes on.

Dani Alves took Barcelona’s first corner of the game and it was met by the head of Ronald Araujo, who rose highest but saw his header go just wide of the far post.

Linares have come flying out of the blocks and have applied a lot of pressure on Barcelona in the early stages, but the Blaugrana have not come under serious threat just yet.

Barcelona have got the game underway here in Linares. Stay with us for updates from Linares vs Barcelona.

With just 10 minutes to go until kick-off, the supporters inside the Estadio de Linarejos are beginning to get excited about what is to come.

18:00 GMT: Barcelona players on the pitch

The Barcelona coaches and players have made their way across the pitch at the Estadio de Linarejos as they head towards the dressing room.

It’s unclear how Xavi Hernandez will set up his team exactly based solely on the names on the team sheet, but it appears as though Dani Alves will start on the right of the front three in his first official match since returning to the club. Alternatively, Alves could start as a right wing-back if Barcelona opt for a back three.

The final preparations at the Estadio de Linarejos are done and now, one hour and 45 minutes before the game, the excitement can begin to build.

Barcelona’s social media team have pictured some of the players as the squad arrived in Linares, with Ousmane Dembele amongst those after he tested negative in a PCR test.

The big news ahead of this Copa del Rey game is that Dani Alves is back for Barcelona, having been officially registered earlier this Wednesday. He could make his official re-debut, after already featuring in the Maradona Cup match against Boca Juniors.

15:20 GMT: When does Barcelona’s Copa del Rey game start? And where can you watch it?