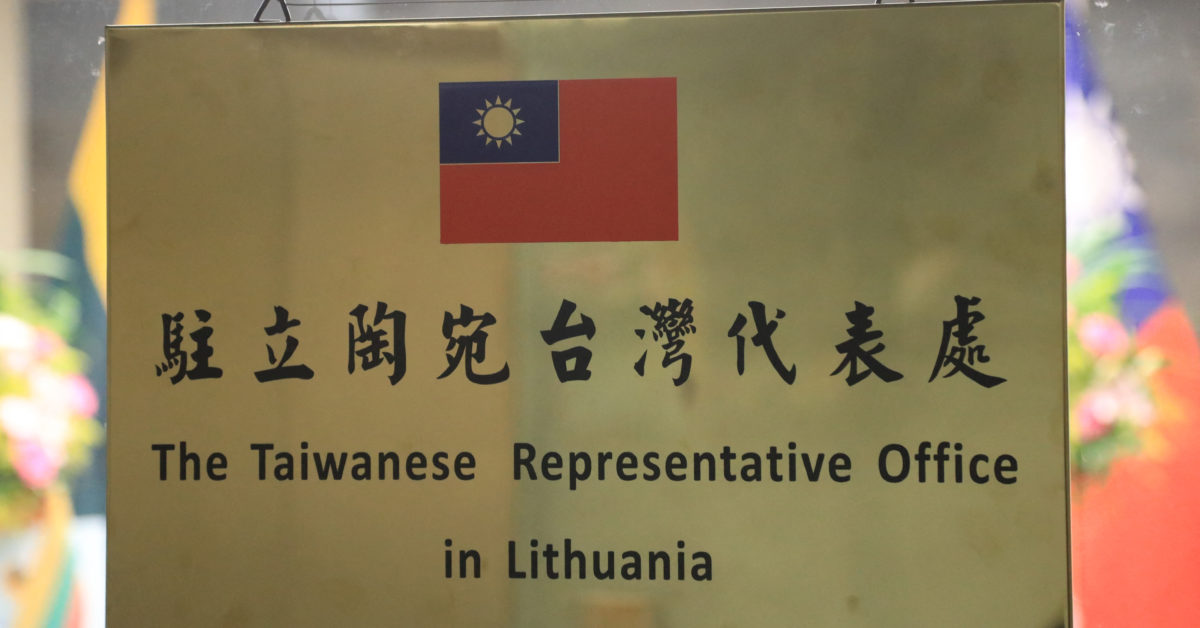 VILNIUS — China downgraded diplomatic relations with Lithuania on Sunday over the opening of a Taiwanese office in Vilnius last week.

The Chinese Foreign Ministry said in a statement that the new Taiwanese Representative Office in Lithuania “openly creates the false impression of ‘one China, one Taiwan’ in the world, renounces the political commitment made by Lithuania … on the establishment of diplomatic relations with the People’s Republic of China, undermines China’s sovereignty and territorial integrity, and grossly interferes in China’s internal affairs.”

“The Chinese government has, out of goodwill to preserve China-Lithuania ties, repeatedly warned Lithuania against acting in bad faith. Regrettably, Lithuania has chosen to ignore China’s solemn position and to disregard the broader interests of bilateral ties and the basic norms governing international relations.” It added that the Lithuanian government “must bear all the ensuing consequences,” add called on it to correct its “mistake.”

China considers Taiwan to be a breakaway province and has vowed to take it back, by force if necessary. Military tension has been on the rise in recent months.

The EU, which has previously warned of an impact on EU-China relations should Beijing’s ties with Vilnius worsen, has not yet responded to China’s latest move.

Lithuanian Deputy Foreign Minister Mantas Adomėnas told POLITICO that Lithuania would have to “fix” its diplomatic ties with Beijing accordingly. “In a sense, this is not new. It only reaffirms the situation where our ambassadors have been recalled … This perpetuates the current situation,” he said.

“Lithuania reaffirms its adherence to the ‘One China’ policy, but at the same time has the right to expand cooperation with Taiwan and to accept and establish non-diplomatic missions to ensure the practical development of such relations, as many other countries do. The reception of the Taiwanese representation in Lithuania is based on economic interests,” the Lithuanian statement said.

A senior Lithuanian official, speaking on condition of anonymity, said it’s unlikely that Beijing will completely cut off the diplomatic relationship. “If they do it, they can’t stop us turning to Taiwan, which would be a disaster for them.”

Taiwan opened the representative office in Lithuania on Thursday, officially upgrading economic ties between Taipei and Vilnius — it also acts as a de facto Taiwanese embassy.

China recalled its ambassador from Vilnius in August, when plans for upgraded relations with Taiwan were announced. The Lithuanian ambassador to Beijing was recalled on September 4 and remains in Vilnius.

Lithuania has taken an increasingly assertive position toward Beijing in recent months. In May, it pulled out of China’s “17+1” format for economic cooperation with Central and Eastern Europe, which is seen by some as a way for Beijing to divide the EU and undermine attempts at a unified approach to China.

“Taiwan is never a country. No matter how [much] ‘Taiwan independence’ forces try to misrepresent facts and confound black and white, the historical fact that the mainland and Taiwan belong to one and the same China cannot be changed. Attempts to seek foreign support for political manipulation will prove a dead end,” the Chinese statement said.

Beijing’s announcement came a day after Taiwan’s former Vice President Chen Chien-jen spoke at a forum on democracy in Vilnius organized by the Lithuanian Foreign Ministry.

Chen, a key ally of the current Taiwanese leader Tsai Ing-wen, who’s regarded by Beijing as pro-independence, appeared alongside the foreign ministers of Lithuania, Latvia and Slovenia, the latter of which currently holds the rotating presidency of the Council of the EU. U.S. Under-Secretary of State for Civilian Security, Democracy and Human Rights Uzra Zeya also attended.

This article is part of POLITICO’s premium policy service Pro Trade. From transatlantic trade wars to the UK’s future trading relationship with the EU and rest of the world, Pro Trade  gives you the insight you need to plan your next move. Email [email protected] for a complimentary trial.