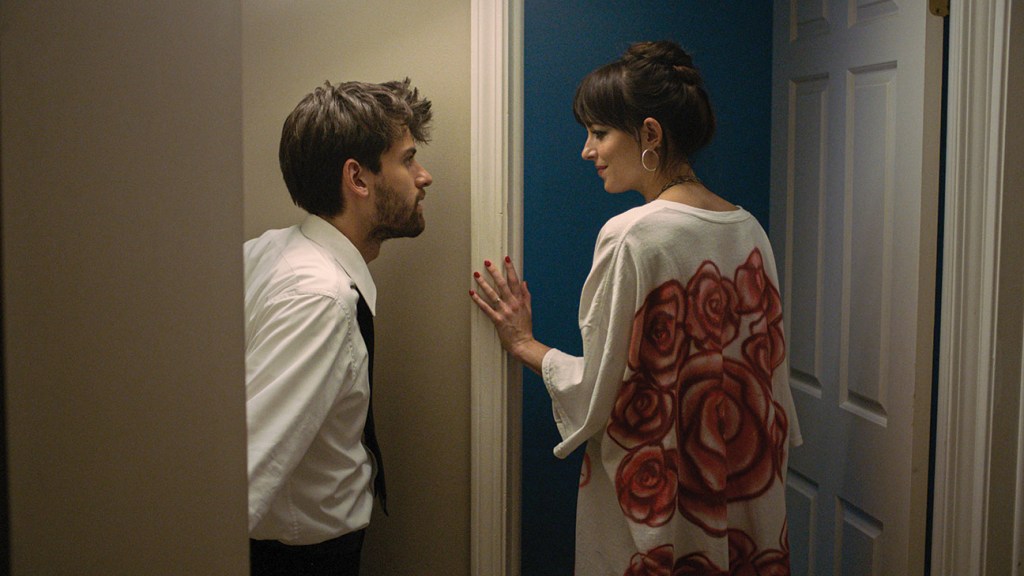 If Gen Z already has an answer to Richard Linklater and the Duplass brothers, it could very well be Cooper Raiff.

While at L.A.’s Occidental College, Raiff tweeted at the elder Duplass, Jay, a link to a homespun movie he made with two college friends, writing, “I bet you won’t click on this link and then email me after.” Less than 24 hours later, he received an email.

Using that movie as a creative jumping-off point, the 24-year-old Dallas native dropped out of school in his junior year to film Shithouse, a microbudget indie that Raiff wrote, directed, produced and starred in. With the guiding hand of the elder Duplass, he shot the movie guerrilla-style in and around the East L.A. neighborhoods Eagle Rock and Highland Park. At one point, Amy Landecker, who plays Raiff’s onscreen mother, asked the filmmaker if the kids playing in the park where they were filming would be leaving to make way for the shoot. “I had to be like, ‘Oh no, they’re not going to be leaving because we don’t have this location secured. In fact, police might show up and say, “Stop filming here.” ‘ ”

Raiff spent a little more than a month on a cut of Shithouse that was then rushed to SXSW for consideration. When it was announced in March 2020 that the Austin-based fest would be all-virtual because of COVID-19, Raiff initially was thrilled to have extra time to work on the film. “It didn’t feel crushing in any way,” he explains. “Everyone was so nice and supportive. It made me feel like I should be sadder because everyone was like, ‘I’m so sorry.’ ” A couple of weeks later, Raiff ignored a call from a number he didn’t recognize. Shithouse‘s sales rep then texted him to answer the phone — his movie had just been named best narrative feature at SXSW.

Representation with ICM Partners and a dizzying array of general meetings (all via Zoom, of course) soon followed, which is how Raiff met Ro Donnelly, the Netflix vet who launched production company TeaTime with actress Dakota Johnson. Raiff pitched the kernel of what would become his sophomore effort, Cha Cha Real Smooth. “I had this idea about a coming-of-age movie for a 12-year-old, a 22-year-old and a 32-year-old,” he says of the project, which Johnson boarded as star and producer. Raiff then landed Endeavor Content and Erik Feig’s PictureStart as financiers.

“I was in way over my head, had never been in any of those [kinds of] meetings and didn’t know what to say,” admits Raiff. “I took the ‘I’m quiet because I’m thinking’ move.”

Cha Cha — the title comes from the 2000 dance-floor starter staple “Cha Cha Slide” — follows a recent college grad working as a bar mitzvah party starter when he befriends a young mother (Johnson) and her autistic daughter (newcomer Vanessa Burghardt). Raiff was not planning on starring, but Johnson pushed back: “She was like, ‘Well, you just like to be so close to your actors, and the way to be closest to your actors is to literally be in the scene with them.’ “

Cha Cha is set to premiere in Sundance’s U.S. Dramatic Competition, with multiple insiders predicting it will be one of the fest’s major sales titles. While sound mixing, Raiff received the news that his would-be second film fest would be going virtual.

“I felt like I’ve been to this rodeo,” notes Raiff. “Maybe if I’d been to a festival, I’d be way more devastated. But [for me, this] is about the fact that I got to make a movie and that maybe I’ll get to make another movie.”

This story first appeared in the Jan. 12 issue of The Hollywood Reporter magazine. Click here to subscribe.