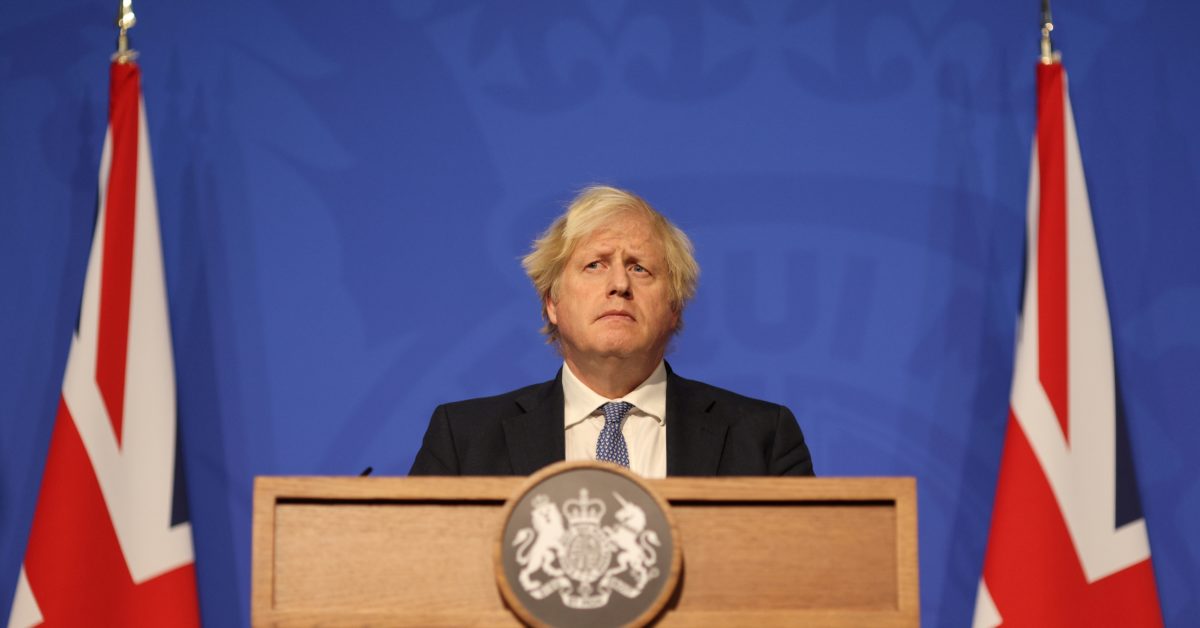 U.K. Prime Minister Boris Johnson tightened coronavirus restrictions in England, insisting the move was in no way an attempt to distract from a scandal over whether or not his staff held a party during lockdown last year.

Johnson told a Westminster press conference tougher measures were “proportionate and reasonable” in the face of the rapidly spreading Omicron variant.

Many across the political divide and among the public more widely questioned his motives, the day after leaked footage showed Downing Street aides joking about a No. 10 Christmas party that would have broken lockdown rules as they rehearsed for press briefings last year.

For a week since the Daily Mirror first reported the prime minister’s staff held a Christmas party, the government has insisted no rules were broken. Minister after minister took to the airwaves to repeat the defense, with Minister for Policing Kit Malthouse telling BBC Breakfast: “I don’t even know if an event took place but if it did then no rules were broken.”

Then, following the leak of footage, government spokesperson Allegra Stratton resigned. In her tearful resignation video earlier Wednesday she said the clip had become a “distraction” from the fight against the virus.

With his credibility severely dented, the prime minister’s was a difficult message to land.

“Why should people at home listening to the prime minister and the secretary of state [Sajid Javid] do things that people working in No. 10 Downing Street are not prepared to do?” Mark Harper, a former Conservative chief whip, asked in the House of Commons on Wednesday night.

Johnson’s botched handling of a spate of crises in recent weeks is “really weighing on Tory MP minds,” according to one former minister, speaking on condition of anonymity so he could be frank.

While Johnson is unlikely to face a serious challenge in the short term, the latest scandal could hardly have come at a worse time.

“People say that we’re somehow making an announcement to coincide with events in politics,” Johnson said. “Well actually, imagine if this step were to have been delayed because of political events of one kind or another — what would people say then? You’ve got to act to protect public health when you’ve got the clear evidence.”

If anything, his reasoning fueled Tory anger in some quarters.

“On the evidence that we’ve seen so far, I think it’s difficult to justify these extra measures,” former Cabinet Minister Liam Fox told MPs, while backbencher Philip Davies described the move as the “latest in a long line of arbitrary, unnecessary socialist measures supported by the socialists on the other side of the house.”

Eyes on the polls

Much of Johnson’s popularity within his own ranks has rested on his ability to win elections, so public anger at the party allegations did little to help the mood in Westminster.

A snap poll by Savanta ComRes published on Wednesday found more than half of voters think Johnson should resign. Even a sizable chunk of Conservative supporters agreed the prime minister should go, with a third calling for his resignation.

The Tories face an electoral test next week in North Shropshire, where a by-election is being held to replace the disgraced former Cabinet Minister Owen Paterson.

“The surprise would be if we won,” said the former minister quoted above, echoing the view of many MPs that voters are likely to punish the Conservatives for Johnson’s perceived incompetence.

While the mood in the party was pretty dark on Wednesday night, even his critics say Johnson’s premiership is not yet “irretrievable.” He could “sharpen up” his operation and bring a few of the talented people sitting on the backbenches into government, the former minister said.

One Conservative aide not authorized to speak on the record said it was difficult to know whether the damage Johnson had done to his relationship with MPs was “long-term damage or shorter-term pain.”

“There are a lot of people across Whitehall who are pretty cross. Ministers and [special advisers] who are just like ‘you know, he made us all look like wankers.’ I think everyone’s feeling pretty sore about it all.”