A meteor that caused a loud boom heard in western Pennsylvania on New Year’s Day exploded in the atmosphere with a blast equivalent to 30 tonnes of TNT, NASA said on Monday.

The sounds were heard a few minutes before 11.30am (local time) on Saturday. Had it not been cloudy, the fireball would have been easily visible in the sky as it broke apart, according to a post on NASA’s Meteor Watch Facebook page.

NASA said a crude estimate indicated that the blast would have been about 100 times the brightness of the full moon.

Data from a nearby infrasound station registered the blast wave from the meteor, enabling NASA to estimate the energy given off.

“If we make a reasonable assumption as to the meteor’s speed (72,420 kilometres per hour), we can ballpark the object’s size at about a yard in diameter, with a mass close to half a tonne,” NASA said.

Allegheny County, which includes Pittsburgh, received 911 reports Saturday of a loud boom and shaking in the suburb of South Hills, according to the county’s Twitter account.

An earthquake and thunder and lightning were initially ruled out as possible causes.

A sonic boom, which sounds similar to an explosion or thunderclap, occurs when an object, such as a meteor or a supersonic aircraft, travels through the atmosphere faster than the speed of sound. 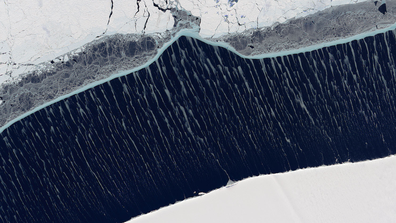 ‘Streaks’ seen from space as sea ice breaks away from Antarctica

Air reacts like fluid to supersonic objects, NASA said. As those objects travel through the air, molecules are pushed aside with great force and this forms a shock wave, heard as a sonic boom.